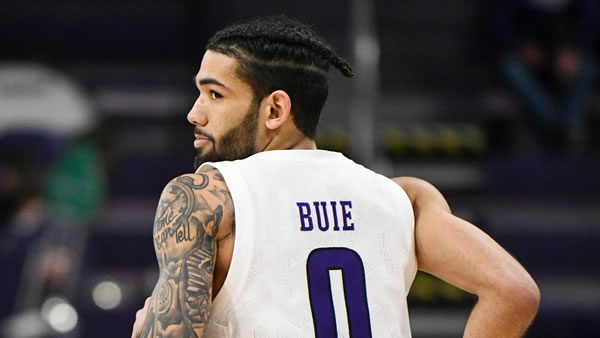 The Northwestern Wildcats got the win last night over Wisconsin, but the Badgers lost the game themselves on the free throw line, sinking just 9 of 16 (56%). They’ll look to keep it going when they visit the Nebraska Cornhuskers, whom they have beaten six consecutive times. The tip-off for tonight’s game at the Pinnacle Bank Arena is scheduled for 7:00 PM ET. The college basketball betting board lists Northwestern as a -2 road favorite with a total line of 130.5

The game opened at some betting sites as low as pick ’em but early betting action, primarily a boatload of public backing, has driven the line up to NEB -2. The total hit the board at 129/129.5 and has risen to 130.5.

Northwestern picked up a victory over Wisconsin by a score of 66-63. Heading into the game, the Wildcats were favored to win, with a point spread of -2.5. The combined 129 points finished above the 124.5 total line.

Nebraska most recently fell to Penn State (76-65). Not only did the Cornhuskers lose straight-up, but they picked up an ATS defeat as +8.5 point underdogs. The combined 141 points finished above the 135.5 total line.

Northwestern
Over their last five games, Northwestern has a straight-up record of 3-2 while going 3-2 vs. the spread. Over this stretch, the Wildcats’ offense averages 72.6 points per game while hitting 40.9% of their shots from the field. On the defensive end of the floor, they have allowed opponents to shoot 44.9% from the field while allowing 71.2 points per contest.

Nebraska
In their previous five contests, Nebraska is 2-3 straight-up and 1-4 vs. the spread. In these five games, they have a scoring average of 62.8 points per game on a shooting percentage of 43.5%. Defensively, they are allowing teams to hit 44.7% of their shots while giving up 72.8 points per game.

This season, the combined power rating of Northwestern’s opponents comes in at 79.8. On the other side, Nebraska’s combined opponent power rating sits at 82.5.

How Does Northwestern Fare On The Road?

For the season, the Wildcats have played four road games and have a record of 3-1. In these contests, Northwestern is 3-1 vs. the spread. Offensively, they have averaged 76.8 points per game on a shooting percentage of 42.8%. On defense, the Wildcats allow 73.5 points per contest when playing away from home. So far, opposing teams have a field goal percentage of 46.8% in these games.

How Does Nebraska Fare At Home?

In their ten games at home, Nebraska has a 4-6 record vs. the spread while going 8-2 straight-up. On offense, the Cornhuskers are shooting 46.4% on their home floor, leading to 71.5 points per game. Defensively, opponents are shooting 39.4% in these contests. The Nebraska defense is allowing 62.6 points per game at home.

For the season, Northwestern is averaging 73.0 points per game (148th) while posting an overall field goal percentage of 42.7%. In today’s game, they will be matched up against a Nebraska defense that has allowed an average of 67.2 points per contest. This year, opponents have hit 42.3% of their shots vs. Nebraska. On the other side, the Nebraska Cornhuskers are coming into the game averaging 73.3 points per game on a shooting percentage of 44.4%. The Cornhuskers will be facing a defensive unit allowing an average of 60.9 points per contest. So far, teams have hit 38.6% of their shots vs. the Wildcats.

From beyond the arc, Northwestern has a shooting percentage of 34.7% while ranking 245th in attempts per game. The Wildcats will be facing a Nebraska defense that has a 3-point field goal shooting percentage allowed of 32.8%. Nebraska enters the game having hit 32.0% of their looks from deep while averaging 7.0 made 3’s per game. On the other end, Northwestern has allowed opponents to hit 35.8% of their shots from beyond the arc.

I don’t know for sure how the Wildcats’ energy will be after playing in a tough-contested match-up last night against the Badgers. However, playing back-to-back against a rested opponent is always tough, but doing it after more than a week off, your conditioning may not be there tonight (low energy defense). That said, I can’t play the Cornhuskers, either. Nebraska will be without two players, Emmanuel Bandoumel and Juwan Gary, who not only log many minutes but are essential in the defensive game. Take the Over 130.5. Bet your NCAA hoops picks for FREE this week by scoring a 50% real cash bonus up to $250 by playing at the web’s best sportsbook! It’s where we play! —-> Bovada Sportsbook (Live wagering platform is INCREDIBLE!)