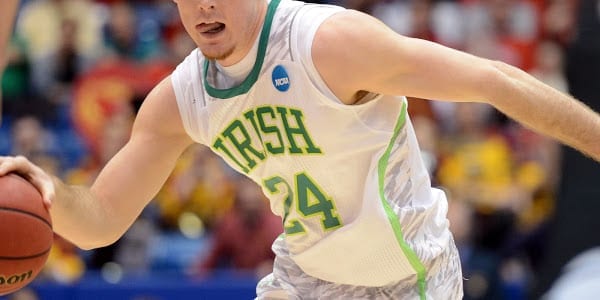 Notre Dame coach Mike Brey joked at halftime that he had waited all season for his team to play the way it did in the first half, but there was a lot of truth to his humor. The Irish were dynamite against Georgia Tech, shredding what was the league’s fifth-best 3-point defense (really the only thing that the Yellow Jackets did well all season) and building a 20-point halftime lead. The second half was a much different story, but the Irish did enough to hold on for the win and the cover behind John Mooney’s 20 points and 10 rebounds. The result was a reversal of fortunes for the Irish, which has been one of the unluckiest teams in the nation (312th in luck per Ken Pomeroy).

Louisville, for the most part, has done what it’s needed to do when it’s needed to do it, and nothing more. The Cardinals haven’t really looked like themselves in the second half of most games, and it’s cost them, as they’ve had both Virginia and Duke on the ropes and let them slip away. Louisville is in no danger of losing out on a trip to the NCAA tournament, but the Cardinals could have seen their seed go much higher had they actually been able to finish out their leads. The one area where Louisville has had no problem finishing is at the free throw line; the Cardinals shoot 77 percent as a team from the charity stripe.

Depth and fatigue. What will Notre Dame have left after its matchup with Pittsburgh the day before? The Irish are a depleted team thanks to injuries, and they’ve had to send two of their starters out for a full 40 minutes against Georgia Tech because they allowed the Yellow Jackets to fight their way back into the contest.

Against Louisville, that’s not as big of a concern as it might be against a team like North Carolina. The Cardinals don’t play as slowly as Virginia does, but they also don’t play at the breakneck pace of the Tar Heels. That gives Notre Dame a fighting chance to stay in the game and avoid the onset of fatigue that comes with playing multiple games in a five-day span. It can be done, but it’s usually not something that works out well for the team that’s trying to survive the grind.

Notre Dame will Cover if:

The Irish can shoot the way they did in the first half against Georgia Tech. Notre Dame is anything but a great offensive team and finished 15th in the ACC for a reason, but the Irish did shoot it very well from deep against a defense that’s not easy to shoot over. Louisville’s another top-quality defense, and the Cardinals have struggled to do two things this season: beat good teams and prove themselves in a high-scoring contest. If the Irish can force the Cardinals to score to win, this could be a stunner.

The Cardinals can take control of the game through their defense. Louisville knows it has the better team in this contest and needs to make sure that Notre Dame knows it right away before it has a chance to ponder the upset. The way that Louisville has taken control all season has been to play tough defense and frustrate its opponents, and that needs to happen again here.

Logic is sometimes wasted in the ACC tournament, especially in a situation where one team has already had a chance to get a game under their belts. But given how Notre Dame finished the game, I have to take Louisville here. The reality is that Notre Dame just isn’t deep enough to stick with Louisville for 40 minutes when the Cardinals have been able to rest and the Irish have not.

Mike Brey’s team should be commended for scrounging up enough to get by Georgia Tech, but the road ends here for the Irish. Give me the Cardinals to advance to a meeting with North Carolina in the ACC quarterfinals and cover the 7.5 point spread.