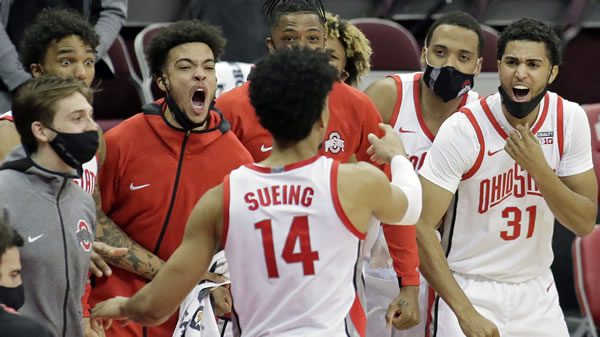 Can Illinois put two consecutive games together? The Illini took care of business against Michigan State, but they’ve gone just 3-2 in their past five contests, having lost at both Rutgers and Purdue. That’s part of life in the Big Ten, where good teams are going to take a few losses here and there, but the Illini have to get this figured out before they get into NCAA tournament play. A year ago, Illinois was a top seed, only to fall in the second round to Loyola because it couldn’t put back-to-back strong games together.

Ohio State’s got a similar problem, having won just four of its past seven contests. Like the Illini, none of them were a bad loss, but there have been warning signs about the Buckeyes as we inch closer to postseason play. Like Illinois, Ohio State is trying to make up for what it didn’t do a year ago, as the Buckeyes got bumped off by Oral Roberts in their first game at the NCAA tournament. The Buckeyes nearly took a second straight loss against Indiana, but they managed to force the Hoosiers’ road issues to pop up again, allowing them to survive. One thing is clear: both of these teams have some unfinished business, and both need to get some momentum moving in the right direction.

The way that Ohio State handled Trayce Jackson-Davis in the win over Indiana offers some positives and some problems leading into this matchup with Illinois and Kofi Cockburn. Against Jackson-Davis, the Buckeyes were aggressive and clearly made him uncomfortable, holding him to 3-for-9 from the floor and battling the Hoosiers to a draw on the rebounds.

Where there’s a real problem was the 27 free throws the Hoosiers shot, including 13 from Jackson-Davis himself. That says that the Buckeyes couldn’t stop the Indiana big man without sending him to the foul line, and if they couldn’t hold him in check, it’s going to be pretty difficult to keep Cockburn from doing whatever he wants inside. Cockburn has been virtually unstoppable from beginning to end this season, and even though he’s not a great foul shooter, Ohio State can’t just use a bunch of fouls to control the game. The Buckeyes have to use their shooting advantage on the perimeter to put pressure on the Illini and force the ball away from the interior.

Jacob Grandison against Rutgers: 2-for-7, five points. Grandison against Michigan State: 8-for-12, 24 points. And that’s the difference between a 79-point effort in a win over the Spartans and scoring just 59 points against the Scarlet Knights. Put simply, Cockburn needs some help in order to get the job done.

Against Rutgers, the help simply didn’t come. Cockburn got his 20, but the rest of the Illini didn’t provide much of anything, allowing the Scarlet Knights to pull away. If Illinois is going to control the game, it needs to do it with its guard play so that it can free Cockburn up to control the interior. The recent rebounding numbers have shown that teams are finding ways to grab a few boards here and there despite Cockburn’s presence, which says that the Illini need more out of their guards in order to go deep into the postseason. More specifically, the Illini need Trent Frazier to play like a fellow star to Cockburn.

Ohio State will Cover If: The Buckeyes can keep up the shooting they showed against Indiana. Ohio State shot 48% for the game, which allowed them to do just enough to get the job done despite allowing the Hoosiers to take 64 shots at the goal. Ohio State either has to hold Illinois to fewer possessions or convert on their own shots.

Illinois will Cover If: The guards give Cockburn enough cover to let him go to work on the boards. Indiana grabbed 12 offensive rebounds against Ohio State, which kept the Hoosiers in the game. If Illinois does the same, the damage will be much greater this time.

I’m not sold that Ohio State can slow down the Illinois attack. The Buckeyes don’t rebound it all that well inside, and when Cockburn can get on the glass, Illinois is going to score more often than not. I like the Illini to go over 73 points.

I wasn’t impressed with Ohio State’s overtime win. The Buckeyes should have lost that game and would have lost if Jackson-Davis had done much of anything at the offensive end. Cockburn isn’t likely to let the same happen to him. Give me Illinois.