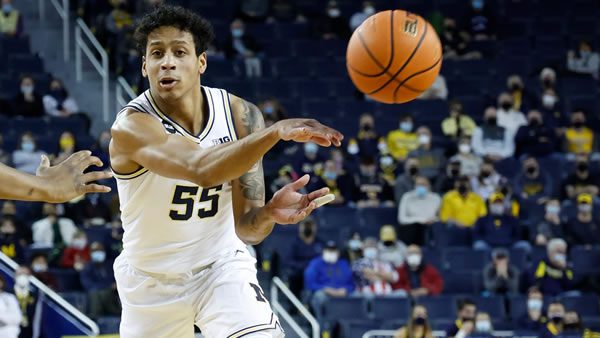 Welcome to Bracket Busters, Big Ten edition. After sleepwalking through the first two months of the season, Michigan is suddenly the team that absolutely nobody wants to see appear in its bracket because the Wolverines have the potential to scare the living daylights out of a No. 1 or No. 2 seed in the second round. Given that Michigan just smashed Purdue at home, the possibility of the Wolverines becoming a No. 9 or 10 seed that makes the second weekend of the tournament is now very real if they can get a few more wins on the profile.

For Ohio State, the goal is simple: get a top-four spot in the Big Ten tournament. Whether they can do that, though, is another question entirely. The Buckeyes are still in the race for first place in the league (they have just one fewer league loss than Wisconsin and Illinois), but they’ve got a tough schedule because of all of the postponements. Ohio State has to squeeze in eight and possibly nine games before Indianapolis, and only two are against the bottom five teams in the conference. If the Buckeyes aren’t playing on Thursday in the Big Ten tournament, they’ll have truly earned the bye to Friday.

Quick, who’s the best team Ohio State’s actually beaten in 2022? The answer might surprise you because it’s Northwestern. In fact, Ohio State has just one win over a team that’s probably going to be playing in March over the past two months, and that was Dec. 11 at home over Wisconsin. And yet, in 2022, the Buckeyes are just 6-4, and the six wins are Maryland, Minnesota, Northwestern, IUPUI, Nebraska, and Penn State. In case you haven’t checked the Big Ten standings, those are the five worst teams in the conference.

Yes, the Buckeyes have played Purdue and Wisconsin tough on the road, but they didn’t win either game and their best win in a true road game all season was at Penn State. Ohio State does have the potential to come up with big performances as long as E.J. Liddell is on the floor, but the Buckeyes had the perfect chance to pick up a win at Rutgers on Wednesday and choked, allowing the Scarlet Knights to score the final 10 points of the game. Liddell and Malaki Branham can take over a game when they hit from the outside, but when the deep shots aren’t dropping, they can be easily beaten.

The biggest question for Michigan was whether the win over Purdue was a genuine step in the right direction or just fortuitous scheduling. The Wolverines benefited from the Big Ten schedule maker sending them to Bloomington right after Indiana upset Purdue and pounded the Hoosiers, but then Michigan came out flat in its next game and barely escaped Northwestern.

In fact, sustaining momentum has been a real problem for Michigan all season. The win over Indiana — a game the Hoosiers were clearly not ready to play — was the only time all season that Michigan has posted back-to-back double-digit wins, and its previous three wins over lesser Big Ten squads (Penn State, Nebraska, and Northwestern) were by a combined nine points.

The second-biggest question for the Wolverines is whether the defense has turned a corner. The Wolverines have played three good halves of defense in a row, but one could have been because everyone gets in a rock fight at Penn State. Before that trip to University Park, Michigan had given up 82, 79, and 83 points in its past three contests, making consistency a real question mark going into this game.

Ohio State will Cover If: The Buckeyes can hit their shots from behind the arc. Ohio State has to come up with some way to neutralize Hunter Dickinson if it’s going to stay in this contest, and that’s going to be challenging if the Buckeyes aren’t hitting from the outside. Ohio State needs to get either Liddell or Branham (preferably both) rolling.

Michigan will Cover If: The defensive surge from the past two games is real. The Wolverines clamped down on Penn State in the second half in University Park and took that momentum into the Purdue game, taking the Boilermakers completely out of their element. That has to happen again to keep the Wolverines rolling.

Michigan has been getting the job done on offense at the Crisler Center. The only instances of the Wolverines failing to top 70 points have been trips to East Lansing and to the offensive desert that is University Park. In their past five home games, the Wolverines have averaged 81.8 points, and defense is not exactly what Ohio State is known for. The Wolverines going over their team total holds promise.

I don’t love taking either team in this situation. The Buckeyes have been beating up on bad teams while falling short against good teams, and the Wolverines haven’t yet proven that the success of the Purdue game is for real. But Michigan has looked excellent at home, and Ohio State doesn’t have a road win in the Big Ten against a team higher than 11th in the conference.
I’ll take the Wolverines here. Bet your Saturday college football picks and Super Bowl Sunday picks for FREE by taking advantage of a 100% REAL CASH bonus on your first deposit of $100 to $300 at MyBookie Sportsbook! (must use bonus code PREDICT100).