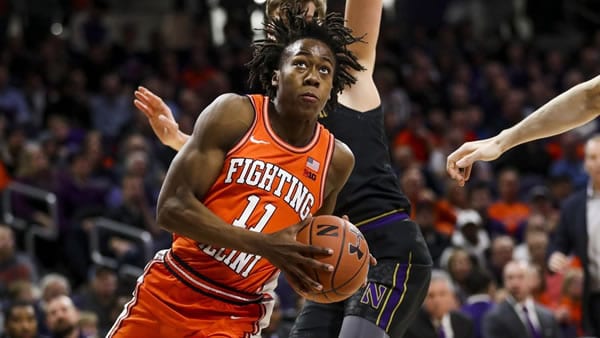 The final game of the regular season should give us a real treat, as these two teams have looked strong in Indianapolis and appear to be set up for a lot of success next week when the NCAA tournament begins. How they’ve gotten here is a matter of different methods, as Illinois has simply bludgeoned its opponents, while Ohio State had to fight for everything it’s gotten.

For two games in Indianapolis, Illinois has looked almost unstoppable. The Illini easily slammed a good Rutgers team in their first game, then followed up by taking control of the game against Iowa in the first half and never letting the Hawkeyes get close enough to threaten them. Ohio State, on the other hand, had to play a tough game with Minnesota on Thursday, go to overtime with Purdue on Friday and survive a Michigan comeback on Saturday. History says that’s not a great place for Ohio State to be because a team that played four games in four days is just 3-7 in the Big Ten final against a team that played only three (and the record drops to 1-7 when the game is played in its traditional footprint of Indianapolis or Chicago). Can the Buckeyes buck history and claim the league crown?

It took a while, but Ohio State was finally able to exploit Michigan’s loss of Isaiah Livers and build a big enough lead to survive the Wolverines’ furious charge. But losing that lead could end up biting the Buckeyes in this game, as they had to use up a lot of energy in staying ahead of Michigan while Illinois had its game put away fairly early.

For the Buckeyes to win this game, they need to get a big game out of Duane Washington. Washington has actually been rather cold when facing the Illini, shooting 3-for-10 in a win in Champaign and 6-for-18 in a loss in Columbus. The Buckeyes also have to avoid foul trouble, as they really can’t afford to lose another starter to fouls after losing forward Kyle Young to injury. Ohio State had a starter foul out in both games against Illinois this year, and having it happen again would be very difficult for the Buckeyes to overcome.

Losing Ayo Dosunmu for a few games might turn out to be the catalyst that lifts Illinois to the Final Four and even further, as the Illini have come back a stronger team since the injury. For one, they haven’t lost since the night Dosunmu got hurt, winning five straight and looking very good doing it. For another, losing Dosunmu forced Andre Curbelo to step up, giving Illinois one more weapon to draw defenses away from Dosunmu and Kofi Cockburn. The big thing Illinois did to beat Iowa was ride its defense. Luka Garza, Joe Wieskamp, and Jordan Bohannon combined to shoot 18-for-48 from the floor against the Illini, which took the Hawkeyes out of sync early and helped Illinois dominate the remainder of the contest. Getting a repeat of the defensive performance and getting more rebounds out of Cockburn would likely seal this one for the Illini.

For the championship only. This will be the rare game where the NCAA tournament isn’t even a consideration. Both teams already have high seeds secured, and because the game will end so close to the selection committee’s reveal of the brackets (the game will likely be over a half-hour before the selection show begins), both teams are probably locked into their seeds regardless of what happens in this game. So this is for nothing but pride and a trophy, which means we should get a well-played game from both sides. Neither should be feeling the pressure, as both have had a lot of success and know that there is a tomorrow after this game, win or lose. This should simply be a great basketball game that brings out the best in both teams.

The Buckeyes can hit a few early shots and build confidence across the board. Ohio State has to get off to a fast start because if the Buckeyes have to come back and play flawless for the fourth day in a row, they’re probably going to run out of energy in the final 10 minutes of the game. The Buckeyes need to build a cushion to protect themselves.

The Illini play sound defense and don’t let Washington or his teammates get into a rhythm. If Illinois can take Washington out of the action with a stern defensive effort, the Illini can force someone else to try to take over and play a role that isn’t really the best fit for them. Illinois has been winning with defense as of late and continuing that would mean going under and taking care of the Buckeyes.

Ohio State is playing well, but Illinois has been on another level in recent weeks. The Illini have covered in 10 of their past 13 games, and they’ve done it with offense, defense, and special teams, each playing critical roles. They’re a great team, and Ohio State is merely a good one. I might want to wait a few minutes closer to when the game actually tips off, as I think this could be a strong live-betting opportunity based on the first five minutes of the game. However, if you want a pick before the game gets going, I’m going to have to go with Illinois and the chalk, as the inside/outside combination should be just a bit too much.