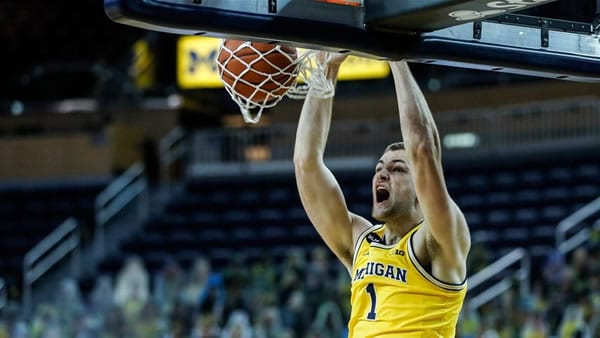 A decent game on the Wednesday college board has the Nittany Lions (+4) visiting the Wolverines (-4) at the Crisler Center in Ann Arbor, Michigan. The Tip-off for this game is set for 7 PM ET.

The host Michigan Wolverines hit the odds board as just a -3 favorite, but that has been driven up to as high as -4.5 at a few sports betting sites. The total has been on the move big time, hitting as high as 142.5 after opening at 139.5 points

Penn State picked up a victory over Iowa by a score of 83-79. Heading into the game, the Nittany Lions were favored to win, with a point spread of -2.5. The combined 162 points finished above the 145.5 total line.

Michigan picked up a victory over Maryland by a score of 81-46. Heading into the game, the Wolverines were favored to win, with a point spread of -0.5. The combined 127 points did not surpass the 143.5 total line.

Penn State
Over their last five games, Penn State, has a straight-up record of 5-0 while going 3-2 vs. the spread. Over this stretch, the Nittany Lions offense averages 78.2 points per game while hitting 48.1% of their shots from the field. On the defensive end of the floor, they have allowed opponents to shoot 37.4% from the field while allowing 63.8 points per contest.

Michigan
In their previous five contests, Michigan is 3-2 straight-up and 3-2 vs. the spread. In these five games, they have a scoring average of 78.2 points per game on a shooting percentage of 45.9%. Defensively, they allow teams to hit 41.6% of their shots while giving up 67.8 points per game.

This season, the combined power rating of Penn State’s opponents comes in at 76.6. On the other side, Michigan’s combined opponent power rating sits at 78.

How Does Penn State Fare On The Road?

For the season, the Nittany Lions have played four road games and have a record of 2-2. In these contests, Penn State is 3-1 vs. the spread. Offensively, they have averaged 73.8 points per game on a shooting percentage of 43.4%. On defense, the Nittany Lions allow 69.2 points per contest when playing away from home. So far, opposing teams have a field goal percentage of 43.2% in these games.

In their seven games at home, Michigan has a 2-5 record vs. the spread while going 5-2 straight-up. On offense, the Wolverines are shooting 45.1% on their home floor, leading to 73.7 points per game. Defensively, opponents are shooting 37.4% in these contests. The Michigan defense is allowing 63.4 points per game at home.

For the season, Penn State is averaging 64.6 points per game (391st) while posting an overall field goal percentage of 43.2%. In today’s game, they will be matched up against a Michigan defense that has allowed an average of 69.4 points per contest. This year, opponents have hit 42.7% of their shots vs. Michigan. On the other side, the Michigan Wolverines are coming into the game averaging 73.0 points per game on a shooting percentage of 46.8%. The Wolverines will be facing a defensive unit allowing an average of 66.0 points per contest. So far, teams have hit 39.8% of their shots vs. the Nittany Lions.

From beyond the arc, Penn State has a shooting percentage of 34.2% while ranking 268th in attempts per game. The Nittany Lions will be facing a Michigan defense that has a 3-point field goal shooting percentage allowed of 34.9%. Michigan enters the game, having hit 34.0% of their looks from deep while averaging 6.35 made 3’s per game. On the other end, Penn State has allowed opponents to hit 32.1% of their shots from beyond the arc.

Pick Against the Betting Line

Michigan stepped it up big time, routing fellow Big Ten rival Maryland 81-46 and crushing them on the boards. The offense has been there for the most part for the Wolverines, but not the defense. I think Penn State will get its share of points here. They shot 50% against Illinois and 54.5% against Iowa, and anything near that, I forecast that they hit 70 plus points. Take the Over 142*. (Note: we had a technical issue and didn’t post the pick portion until 7:15 PM)