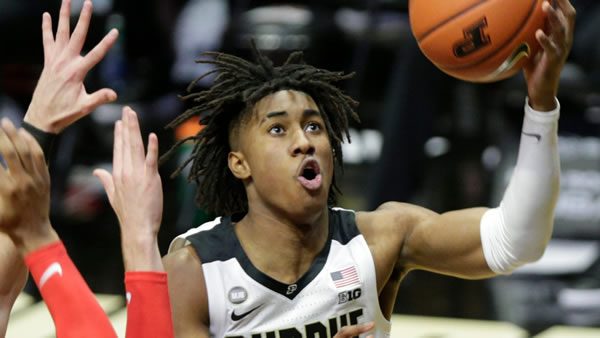 Wisconsin comes into this game with a chance to essentially lock up the Big Ten regular-season title on its home floor, and it gets to do so against a team it’s already beaten this year. OK, the Badgers could technically lose the season finale to Nebraska, but given that the Huskers are 2-16 in the Big Ten, that seems pretty unlikely. With a win here, the Badgers could lock Purdue out of the Big Ten title race and could win the league outright with either an Illinois loss or a win over Nebraska on the final day.

But Purdue isn’t exactly going to go down without a fight. The Boilers weren’t thrilled about seeing their long winning streak in West Lafayette come to an end, and Matt Painter especially wasn’t thrilled about watching Wisconsin outfight Purdue over the final 11 minutes of the game. The Boilers had the game in their grasp before watching the Badgers outscore them 32-20 over the game’s final 11 minutes, and the 29 good minutes they played are a large reason why they’re favored here. The question coming into this game is whether that game was an outlier or a blueprint on how to beat Purdue. If it’s the latter, Wisconsin’s likely to claim another Big Ten championship on Tuesday.

Purdue cannot let what happened to its offense in West Lafayette repeat itself in Madison. The Boilers essentially became Zach Edey and nothing else, as the Badgers decided that Edey could do what he wanted in the paint, but they sure as heck weren’t giving good looks to the Boiler guards. The strategy worked, as the rest of the Boilermakers shot 13-for-39 from the field, and Purdue hurt its cause with poor free-throw shooting, a weakness all season long.

Purdue’s two big issues all season have been defense and foul shooting; the latter just hasn’t come up enough to really make much of a difference. When the Boilers face a team like Wisconsin, however, they need to be able to close out a game because what they haven’t done can really come back to bite them against a team that puts them in a tight situation. So far, they haven’t shown they can answer that challenge.

On the other side of the coin, closing out tight games has been what Wisconsin basketball has been all about. The Badgers have played five games decided by four points or less and have won all of them, showing poise down the stretch throughout the year. However, Wisconsin has to rein in the fouls against Purdue this time around, as foul trouble nearly derailed the good work the Badgers did in getting the lead last time.

Three different Badgers fouled out, and Wisconsin would have lost if not for Johnny Davis going off for 37 points that night. The one thing the Badgers did do well is that they harassed Purdue’s guards from beginning to end and made sure they couldn’t give Edey the help he needed to carry the Boilers to a win. They’ll have to do something similar if they’re going to get a season sweep of the Boilermakers.

Purdue will Cover If: The Boilermakers can get a third scorer besides Edey and Jaden Ivey to get rolling. The Boilers are good enough to win, but not if only two out of five starters are putting up points. Purdue has to get something out of Sasha Stefanovic in this game.

Wisconsin will Cover If: The Badgers can avoid foul trouble and play smart with the basketball. The Badgers fell behind early in the first game, and even though they eventually battled their way back to take the lead, they’d rather not go through a repeat of that against an opponent as talented as Purdue.

The Boilers are at their best when they’re able to get out and run, and this Wisconsin team is willing to run with its opponents. The over makes a lot of sense here, given how these teams play each other.

I might buy an extra point here to be safe, but I really like how the Badgers have played for this season and how they’ve set themselves to win another Big Ten title. I think this will be a tight game throughout, and when it’s a close game, you usually want the team getting points. I’ll take Wisconsin here. Question: Where do you bet your college basketball picks? Why not consider trying out another/better sportsbook? Check out this sweet bucket of goodness: 50% bonus up to $250 (real cash, not a match play), your credit card WILL work there, Bitcoin payouts within an hour, rebates on ALL your bets; win, lose or draw! And the BEST live betting platform on the web! Find all this and more at Bovada Sportsbook!