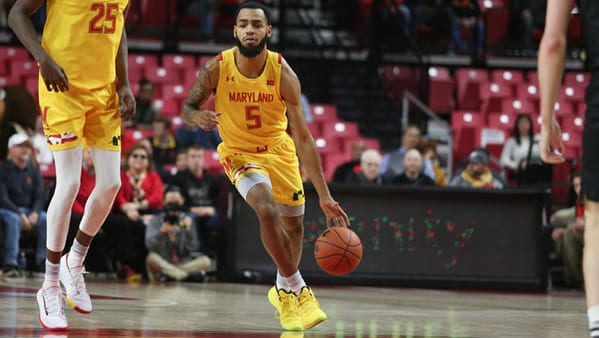 The fact that we’re writing about Rutgers basketball when conference play has begun says a lot about how far the Scarlet Knights have come in the past few years. Rutgers has long been an afterthought during the winter (Rutgers hasn’t been to the NCAA tournament since 1991 and is on its seventh coach and third conference since then), but the Scarlet Knights were 20-game winners last year for the first time since 2004 and appeared to be on track to finish in the top half of a loaded Big Ten.

They’ll get a chance to prove themselves further when they visit Maryland, a place where they have never won. Granted, the teams have only been in the same conference since 2015, but Rutgers is 0-5 all-time in College Park and 1-8 overall against the Terrapins. But the Scarlet Knights finally broke through last year, and Maryland is reeling after failing its first test of the season with a 51-point effort at Clemson. Can the Terrapins bounce back and continue the dominance of their I-95 rival?

The way Rutgers wins is simple: Defense, defense, and more defense. The Scarlet Knights can score, but they’re a lot more proud of the fact that they’ve held all four opponents this season to 42 percent from the floor or less. Fairleigh Dickinson is the only team to break 70 on Rutgers this season, and that was because the Scarlet Knights played so fast in that game that both teams topped 65 shots.

Rutgers was fine playing that way against FDU because the Knights have one of the worst defenses in the country, but against teams that actually might make the NCAA tournament, the Scarlet Knights would rather play a slower tempo. When the offense does come from Rutgers, it’s likely to come from Ron Harper Jr. and Jacob Young, who combine to average 38.3 points per game and both shoot over 40 percent from beyond the arc.

If the Terrapins had played the second half and did the first, they likely would have had Clemson. But Maryland forgot to bring its shooting to the Palmetto State until it was too late, shooting just 6-for-23 for the first half and allowing the Tigers to put the game to bed in the first 20 minutes. In this game, Maryland needs more from Eric Ayala, who took just seven shots and finished with six points against Clemson. Ayala has led the Terrapins in scoring to this point, and when he isn’t hitting, Maryland just isn’t the same team.

The big problem for Maryland might have been that before facing Clemson, the Terrapins hadn’t faced a team that prioritized defense. The best defense Maryland had seen beside the Tigers was Old Dominion, and the Monarchs just got shredded by Virginia Commonwealth, a team known for its defense rather than its offense. Rutgers doesn’t play defense quite as well as Clemson does, but the Scarlet Knights are pretty solid at keeping points off the board. If Maryland’s shooting isn’t a lot better, the Terrapins will be in trouble.

Rebounding. Maryland hasn’t had to do a lot of it, and Rutgers has done it quite well despite playing a four-guard lineup. The Scarlet Knights’ defense is built around limiting the number of shots in the game, and the way you limit shots is to clean up on the defensive glass. Rutgers plays that strategy well, and that could be a problem for a Maryland team that does not take a lot of shots.

The Terrapins have some height available in 6-foot-9 Galin Smith, but Smith will give away two inches to Rutgers center Cliff Omoruyi. However, Smith is a senior, and his experience could be critical against the freshman Omoruyi.

Rutgers will Cover if:

The Scarlet Knights can get a comfortable lead early and keep the game from turning into a free throw contest. Rutgers’ biggest Achilles’ heel at the moment is the fact that the Scarlet Knights cannot shoot free throws. Young is the only Rutgers starter to shoot better than 65 percent from the stripe, and three Rutgers players shoot worse than 60 percent from the line. If Maryland forces Rutgers to win the game from the line, it’s difficult to see how that occurs.

The Terrapins can hit shots early. Maryland needs to establish some confidence early in this game after having such a poor showing in its most recent game, and hitting a few early shots will help the Terrapins remind themselves that they can be a good offensive squad. If the Terrapins go through another early drought, it’s going to be tough for Maryland to keep its confidence high.

The best pick here, in my eyes, is the under. I have no idea what the oddsmakers were doing picking 140 points in this game when only one in five matchups in College Park has ever topped that total, and the only reason that happened was because Maryland dropped 88 points on a bad Rutgers team in 2016.

The past two matchups in College Park were a 61-51 and 56-51 win for Maryland, and I expect this one to be another close, low-scoring game. Low-scoring would seem to favor Rutgers, but I’m nervous about the Scarlet Knights winning the game at the free-throw line. Give me Maryland to edge Rutgers for the cover here.

Have a bad weekend of football betting? Instead of re-loading at your book, you may want to consider making your dollars count more by taking advantage of a 100% REAL CASH bonus up on your first deposit of $100 to $1000 at Betnow Sportsbook!