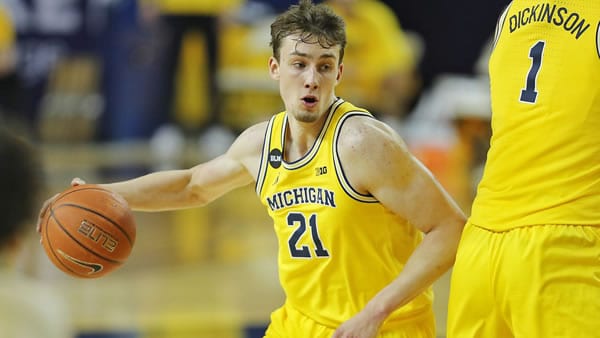 This game could be the season for Rutgers, as the Scarlet Knights’ profile is one win away from being complete. Rutgers hasn’t been in the NCAA tournament since 1991, and thanks to playing in the Big Ten, the Scarlet Knights have built their profile into a likely No. 7 or No. 8 seed. With no real bad losses available the rest of the way (as long as they don’t lose at 1-11 Nebraska on Feb. 28), a win here would mean that Rutgers is safely in the field.

But getting that win will be a challenge, as Michigan is playing fantastic basketball at the mo-ment. The Wolverines were a bit rusty in their win over Wisconsin, but they came up with a fan-tastic second half to turn a 12-point deficit into an eight-point win that essentially cemented their hold on the Big Ten. This is a team that has every piece of the puzzle needed to make a run at the Final Four and might very well be a No. 1 seed when the NCAA tournament gets un-derway next month. To cement that, Michigan likely has to go 4-1 or better in the final stretch, and that means they can’t afford to take a loss here with Ohio State and Iowa still to come. Can the Wolverines hold serve here against a team that knows it can end a long drought with one win?

The win over Minnesota was an excellent example. The Golden Gophers ended up with 15 more attempts from the field than the Scarlet Knights, but Rutgers still won the game by four because it was patient enough to get quality looks at the hoop. Rutgers was 26-for-49 in that game, and each long possession only increased Minnesota’s desperation and speed when the Gophers fi-nally did get the ball back.

A truly ideal game for Rutgers would see either Geo Baker or Ron Harper Jr. provide the offense while the defense went to work. That was the model the Knights followed in beating Northwest-ern, and if Myles Johnson plays the way he did Saturday, Rutgers will be in good shape.

Occasionally, I read a game properly, and if you read my breakdown of Michigan-Wisconsin, you might remember that to be the case. Even though my pick of Wisconsin winning the game proved to be the wrong call, my suggestion of waiting to live-bet Michigan until the Wolverines got their legs under them was the right decision. If you waited to jump on the Wolverines until halftime, you cashed comfortably and might have made a substantial profit.

Such a situation probably won’t happen a second time because the Wolverines should be back to themselves from the beginning of this game. Michigan now has a game under it and hasn’t had any more COVID issues, which should allow the Wolverines to get back to the way they like to play.

That means slow, deliberate, and efficient offense and stern defense, which means Isaiah Livers has to take over the game. Against Wisconsin, he did exactly that by going 8-for-16 from the floor and adding seven rebounds, a solid complement to the rebounding of center Hunter Dick-inson. Those two players grabbed 22 of Michigan’s 36 boards against Wisconsin, and they’ll both have to be efficient on both the glass and with their scoring in order to neutralize John-son’s interior game.

Fouls. These teams are not deep, and if either side loses anyone significant to foul trouble, the level of play drops off considerably. Rutgers nearly found out the hard way when Baker and Harper Jr. both ended up with four fouls, forcing them to play more conservatively and nearly allow Minnesota back in the game.

Michigan didn’t foul much against Wisconsin, but Rutgers will likely try to force the ball inside and get itself to the foul line. If that effort is successful, it could drastically weaken the Wolver-ines. Whichever team is better at keeping its best players on the floor has a big edge.

Rutgers will Cover If:

The Scarlet Knights can hit their shots early and often. Rutgers is not going to bother Michigan with its slow-paced style because the Wolverines like to play that way too. Instead, the Scarlet Knights have to keep Michigan from getting its nose in front and controlling the remainder of the contest. The longer the Knights hang around, the better their chances.

Michigan will Cover If: The Wolverines can plant the seed of doubt in the minds of the Scarlet Knights. The last time Rutgers beat Michigan would be never, and the last time the Scarlet Knights came within 10 points of the Wolverines in Ann Arbor would also be never. This is, of course, is a different Rutgers team, but the reality is that it’s hard for a team to lift its mentality against a team it has never beaten. If the Wolverines don’t let the Knights into the game, it should be smooth sailing.

Michigan’s got more to lose than Rutgers does, as the Wolverines could be out of the top seed line if they were to drop this game. The Scarlet Knights badly want this game, but they’ll have another opportunity over the final few games should this one not go according to plan. A loss here for Michigan might condemn the Wolverines to the No. 2 seed line, something they really don’t want to face in this uncertain situation.

Michigan is both more talented and playing excellent basketball at the moment, and the Knights are giving up too much on defense. Give me the Wolverines. Bet your Rutgers/Michigan picks LIVE-in-progress while the game is going on at Bovada Sportsbook! Home of the best live wagering platform on the planet! Credit cards work there for depositing and they’ll give you a generous 50% real cash bonus on your first deposit of $100 to $500! Click here to start betting at a better book today!