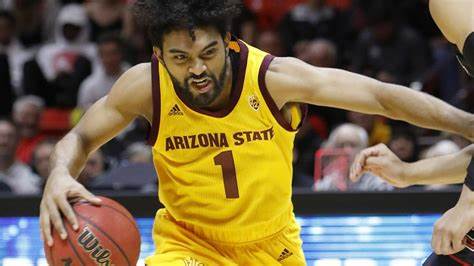 A pair of disrespected squads face off in an effort to earn some national attention after an overlooked start to the season. Arizona State fell slightly in the polls after losing in Bubbleville to Villanova, but the Sun Devils appear to be one of the top squads in the Pac-12 as well as one of the fastest. With a scoring average of 84.5 points per game, it’s safe to say points haven’t been at a premium for the Sun Devils.
The same cannot be said for the Aztecs, who have built their 4-0 start on the back of the stiffest defense in the country. Few have been tougher than San Diego State’s 54.3 points per game so far, and the Aztecs haven’t allowed anyone to top 60 points yet this season. With league play starting soon, this marks the last chance for San Diego State to earn a signature win before Mountain West play gets going. Can they pull it off?

When mid-major teams become this good, it’s often by getting experience and knowing who they are. Both of those certainly apply to San Diego State, which features a senior-dominated lineup and doesn’t try to do too much on offense. The Aztecs are not great shooters, and they know it, as only one of their top five scorers shoots better than 45 percent from the floor.

But San Diego State wins anyway because it just doesn’t allow opponents to get their offense going. The Aztecs are experts in forcing turnovers, as they average 9.8 steals per game to this point. Plus, they force opponents to take tough shots and make sure that there just aren’t that many shots in the game in general. UCLA found out the hard way just how effective the Aztecs can be when it shot only 39.5 percent from the floor against San Diego State — a number that simply killed the Bruins’ chances of making their own methodical style work.

One player arrives and another exits, as Arizona State gets Alonzo Verge back on the court for this game but likely has to play without leading rebounder Marcus Bagley. Bagley had to exit the win over California because of an issue with his left leg, initially feared to be an Achilles injury. However, the prognosis is that Bagley simply strained his calf and will likely be back within a week or two.

Contrasting styles. San Diego State loves to take the air out of the ball and force its opponents to hit tough shots. Arizona State is all about pushing the tempo and keeping the offense going from beginning to end. Obviously, both teams can’t play the way they want to in this matchup, so this game will come down to who can do the things needed to play their style of basketball.

History suggests that ASU has a better chance of successfully adjusting to San Diego State’s game than the Aztecs do of going the other way. Against California, Arizona State won in a 70-62 game, its lowest point total this season. However, of course, there is a catch to that: the fact that ASU had to force 20 California turnovers to get that win. At just 11 turnovers per game, San Diego State isn’t likely to become its own worst enemy the way the Golden Bears did.

San Diego State will Cover if:

The Aztecs can take control of the glass from the beginning. San Diego State’s defense can beat you in one of two ways. The Aztecs can either force a large number of turnovers and ensure that you never get good looks at the basket (UC Irvine), or they can limit you to bad looks and clean up on the glass, so there isn’t a putback attempt (UCLA). Arizona State tends to take good care of the ball, so the Aztecs will likely pursue the latter option in this game. If San Diego State can win the rebounding battle, they’ll force ASU to play at their pace rather than a breakneck style.

Arizona State will Cover if:

These teams look pretty even, and when you have that kind of situation, it’s usually a good idea to take the defense and take your chances. San Diego State is a senior-dominated squad that knows how to frustrate its opponents, and they know that they don’t have any more chances to win national respect after this game. Arizona State doesn’t have that kind of situation, as the Sun Devils will have plenty more opportunities that come with playing in the Pac-12. Where are you betting your college hoops this season? Does your bookie give you the ability to bet at -105 reduced odds? Of course he doesn’t! So why not consider making the switch to BetAnySports? Better odds; Better sportsbook!