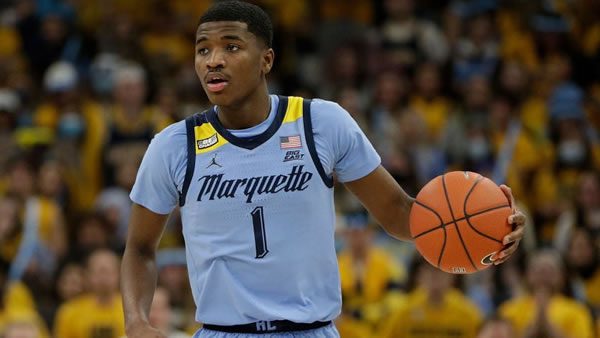 Seton Hall comes into this game off two losses, but they were both were against quality opponents losing to Xavier by just three and Providence by four. They now travel to Milwaukee to take on Marquette at Fiserv
Form.

The point spread line opened at -7, and the current board has nearly every sportsbook we track still hanging a -7 line. The total line opened at 140.5 and has climbed as high as -142.5 at some of the shops catering to a lot of public action.

Seton Hall lost to Xavier in their last game by a score of 73-70. But because the Pirates were
+8.5 point underdogs, they finished with an ATS win. The combined 143 points did not surpass the
143.5 total line.

Marquette most recently fell to Providence (103-98). Not only did the Golden Eagles lose
straight-up, but they picked up an ATS defeat as +0.5 point underdogs. The combined 201 points
finished above the 149.5 total line.

Seton Hall
Over their last five games, Seton Hall has a straight-up record of 3-2 while going 3-1 vs. the
spread. Over this stretch, the Pirates’ offense averages 66.0 points per game while hitting 43.2%
of their shots from the field. On the defensive end of the floor, they have allowed opponents to
shoot 36.8% from the field while allowing 58.2 points per contest.

Marquette
In their previous five contests, Marquette is 3-2 straight-up and 2-3 vs. the spread. In these
five games, they have a scoring average of 82.6 points per game on a shooting percentage of
51.8%. Defensively, they allow teams to hit 46.2% of their shots while giving up 76.6 points per
game.

This season, the combined power rating of Seton Hall’s opponents comes in at 75.1. On the
other side, Marquette’s combined opponent power rating sits at 78.1.

How Does Seton Hall Fare On The Road?

For the season, the Pirates have played four road games and have a record of 2-2. In these
contests, Seton Hall is 3-1 vs. the spread. Offensively, they have averaged 62.5 points per game
on a shooting percentage of 41.0%. On defense, the Pirates are allowing 69.0 points per contest
when playing away from home. So far, opposing teams have a field goal percentage of 44.8% in
these games.

How Does Marquette Fare At Home?

In their nine games at home, Marquette has a 4-5 record vs. the spread while going 8-1
straight-up. On offense, the Golden Eagles are shooting 51.6% on their home floor, leading to
85.4 points per game. Defensively, opponents are shooting 42.9% in these contests. The Marquette
defense is allowing 68.2 points per game at home.

For the season, Seton Hall is averaging 72.9 points per game (150th) while posting an overall
field goal percentage of 42.3%. In today’s game, they will be matched up against a Marquette
defense that has allowed an average of 70.3 points per contest. This year, opponents have hit
43.0% of their shots vs. Marquette. On the other side, the Marquette Golden Eagles are coming
into the game averaging 74.4 points per game on a shooting percentage of 45.3%. The Golden Eagles
will be facing a defensive unit allowing an average of 62.4 points per contest. So far, teams
have hit 39.4% of their shots vs. the Pirates.

From beyond the arc, Seton Hall has a shooting percentage of 34.0% while ranking 379th in
attempts per game. The Pirates will be facing a Marquette defense that has a 3-point field goal
shooting percentage allowed of 33.6%. Marquette enters the game having hit 34.7% of their looks
from deep while averaging 8.61 made 3’s per game. On the other end, Seton Hall has allowed
opponents to hit 29.2% of their shots from beyond the arc.

Marquette is one of the better shooting teams, and only Creighton
and Mississippi State have held them below 70 points. They’ve averaged nearly 15 points over
their opponent’s defensive scoring average and could win this going away if they can stay out
of foul trouble. That said, I like the Seton Hall defense. They have held their opponents to
below their average in scoring, FG%, and 3-point shooting. The Pirates played Xavier tough,
holding them to 73 points. Their second-lowest scoring output on the season. On the offensive
side of the ball Seton Hall is ranked 274th in scoring. 256th, in FG% and 274th in FT%. Take the
UNDER Note: Check out this incredible offer! Deposit $100 to $300 and get a MASSIVE 125% real cash bonus PLUS get a FREE HALF POINT everytime you bet your favorite NFL, college football, NBA and college basketball team! All you have to do is use bonus promo code PREDICTEM when you sign up at GTBets Sportsbook! They have a cool player loyalty rewards program too!