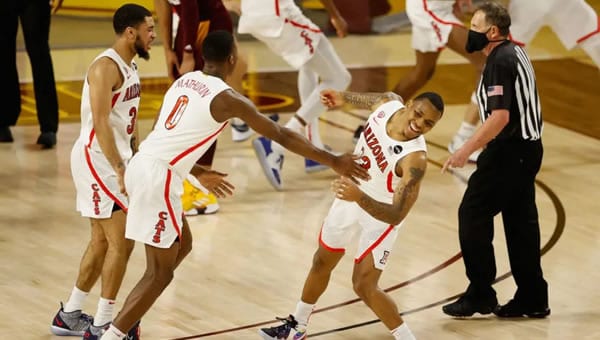 Stanford might have thrown the Pac-12 race into chaos last time out, as the Cardinal managed to take down UCLA and did it shorthanded after contact tracing felled three players. Now, can Stanford find a way to get itself back into the race that it broke open? The Cardinal are now on the cusp of entering the logjam of teams behind the Bruins, as they’ve got a winning record in the Pac-12, and seven of their final ten games are against teams with a losing record in the league.

Arizona doesn’t have anything to worry about beyond the Pac-12, as the Wildcats have self-imposed a postseason ban (and unlike most teams that do that, that’s actually a penalty for the Wildcats, who would have been in the mix for the NCAA tournament) and won’t play anything beyond the Pac-12 schedule. However, the Wildcats can still win a league title thanks to Stanford beating UCLA and opening the door. But to do that, Arizona’s going to have to be much better than it was in its two-game sweep of Arizona State, which saw the Wildcats nearly throw away the first matchup before looking much better the second time out. Which version shows up here?

Why did Stanford find a way to get past UCLA despite seeing Ziaire Williams, Bryce Wills, and Daejon Davis out of the lineup before tipoff? Simple: the Cardinal played good defense, and Oscar da Silva willed his team to a victory. Da Silva is the Cardinal’s leader anyway, but against UCLA, he made himself the star by scoring 26 points, including a 9-for-9 performance from the free-throw line.

Just as important, Stanford played defense well enough to keep UCLA from wearing down the Cardinal and exploiting their lack of depth. The Bruins aren’t a great offensive team anyway, but with only six players on the court for any significant amount of time, Stanford could have easily fallen apart over time. Instead, the Cardinal held UCLA to 41.7 percent from the floor, the main reason why it won.

To do it again, the defense has to once again prove rock-solid. Stanford did allow Arizona to shoot 48 percent from the field in a 78-75 win over the Wildcats in the first meeting, but the Cardinal also forced 17 turnovers, directly leading to the margin of victory.

Home-court advantage doesn’t mean as much in the COVID era, and it sure hasn’t meant that much for the Wildcats, as two of their three losses in the Pac-12 have come at McKale Center, to USC and UCLA. The third was Stanford, and the Wildcats simply have to get more from the starting lineup than they did in that first meeting.

Jemarl Baker Jr. was fantastic for the Wildcats in that game, scoring 29 points. The rest of the Arizona starting five combined to score 18 points, leaving the bench to try to pick up the slack. James Akinjo simply cannot get held to seven points if Arizona is going to try to compete with the upper echelon of the Pac-12. Throw in a rather weak defensive showing that allowed Stanford to shoot seven percent better than usual (the Cardinal hit 52 percent from the floor in the first meeting), and it’s easy to see why Arizona got beat in the first matchup.

Mindset. Where will Stanford’s heads be at after the Cardinal overcame multiple COVID absences to shock UCLA? On the one hand, the Cardinal played perhaps their best game of the season when it mattered most, and a performance like that can do a lot for a team. On the other, it’s human nature to get satisfied after winning a big game and play lousy in the next game.

That’s why the line is as big as it is here: the metrics don’t really justify making Stanford this big of an underdog, even in Tucson. But if the Cardinal doesn’t have their minds on Arizona and not UCLA at tip time, this line will be too low.

Stanford will Cover If:

The Cardinal respond to having their roster back to normal and play the way they’re capable of playing. Stanford needs to put the UCLA game in the past and get focused on the Wildcats, who are very capable of turning this into a rout if the Cardinal isn’t ready to go. If the defense isn’t where it needs to be, Stanford won’t be able to keep up.

The Wildcats can actually hit their foul shots. Good defensive teams like Stanford tend to send opponents to the foul line a fair amount, and Arizona is one of the best in the country at getting to the free-throw line. The problem is that the Wildcats didn’t hit from the stripe in the first matchup, going just 12-for-23 from the stripe. That’s not going to get it done against this team.

I hate taking teams that are coming off a big upset because there is something to the theory that teams who score an upset win tend not to play very well the next time out. This might be one that I look to live bet to get a better number, but the reality is that if Stanford plays its game, 8.5 points is just too many.

I think Arizona gets the win here, but I want Stanford and the points. Bet your college hoops picks for FREE this week by taking advantage of a 100% REAL CASH bonus on your first deposit of $100 to $300 at MyBookie Sportsbook! (Must use bonus code PREDICT100 when signing up!)