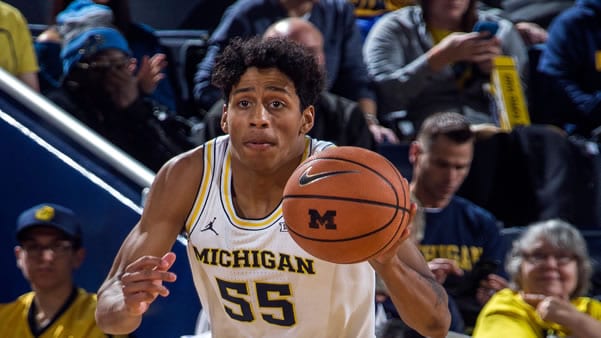 After struggling through the first half on Thursday, Texas Southern played an almost flawless second half against Mount St. Mary’s and earned a trip up Interstate 65 to take a shot at Michigan. If any No. 1 seed is going to fall to a 16 this year (for the record, I do NOT believe one will), Michigan is probably the one because the Wolverines are playing their first game without Isaiah Livers and are still trying to adjust to life without him.

That could be the edge that Texas Southern needs, as it’s already got a game of experience in this tournament and has a few of those nerves out of the way. Plus, they play a style that can really bother Michigan, as they move the ball quickly and prefer to take a lot of shots. Michigan is much more patient, and without Livers on the floor, the Wolverines will likely try to slow the game down and force Texas Southern to play at their tempo. But TSU coach Johnny Jones has already shown that he can adjust to playing slowly, as he watched his team fall behind 10 to Mount St. Mary’s before unleashing a press and flipping the game on its head. Can the Tigers use what they learned in Bloomington to keep things close in West Lafayette?

One reason that Texas Southern takes so many shots is the law of averages: eventually, some shots have to go in if you take around 70 of them. The Tigers didn’t hit many of them against Mount St. Mary’s, but they managed to sink enough in the second half to turn a 10-point deficit into an eight-point win.

The key for Texas Southern is for the Tigers to refuse to let themselves get sucked into playing at Michigan’s slow speed. Texas Southern had success when it forced the issue and got the Mountaineers flustered with a pressure defense, and throwing that at Mount St. Mary’s allowed them to play the second half at a tempo where the Tigers were comfortable. The problem is that Michigan is full of much better athletes than Mount St. Mary’s and will likely handle the pressure much better than the Mountaineers did, which means that the Tigers can’t afford to shoot 8-for-30 the way they did in the first half in that game.

That means the Tigers need more out of Michael Weathers than they got in the opener. Weathers is normally the Tigers’ leader but shot just 3-for-11 against the Mountaineers and ended up leaving the scoring to John Walker III. Walker had 19 points in the win over MSM, but he’s going to have a devil of a time trying to repeat that against Hunter Dickinson and Michigan. Weathers has to give the Tigers closer to his 16.5 points per game.

Are the Wolverines really ready for life without Livers? Michigan struggled down the stretch, losing three of their final five games and failing to get their offense going in most of those games. The only game that saw Michigan top 70 points came against Maryland, one of the few teams who actually triggers the best out of the Wolverines’ offense.

In their three recent losses, Michigan has shot 41 percent or worse, and to make matters worse, two of those games took place with a healthy Livers. Livers was also the only one to shoot the ball well at Mackey Arena when the Wolverines played Purdue there earlier this season, which could mess with Michigan’s confidence. Obviously, Texas Southern presents neither the style nor personnel problems that facing the Boilermakers did, but playing in an arena where the ball didn’t go in the basket very often can mess with a shooter’s confidence. The Wolverines need to get the ball in the hands of Dickinson as often as possible, as Texas Southern is undersized and doesn’t have the personnel needed to stop a strong inside game.

Playing Thursday. There’s something to be said for playing a game already in this tournament because at least one of the two No. 16s who come out of the First Four have given the No. 1 a battle for long enough to keep the game within 25 points and earn the cover. The public wants to bet on the teams they know, and they don’t know anyone better than the No. 1 seeds, which pushes the lines a little higher than they should be in some cases.

Texas Southern bettors benefited from this in 2018 against Xavier, which saw the Tigers battle the Musketeers long enough that the final margin was just 19 points, earning the win at the sportsbook. The Tigers already have the nerves out of their way and can play with absolutely nothing to lose, which could give them an edge in the early going. When a spread is this large, every edge can make the difference, and a strong start by Texas Southern could be the thing that keeps the Tigers in the game.

Texas Southern will Cover If:

The Tigers can get their offense going and actually get Weathers to hit a few shots. Texas Southern is going nowhere without its leader in this game, and odds are that Johnny Jones has discussed how badly the Tigers need a big game out of Weathers to have a chance. The Tigers can’t afford to play at Michigan’s tempo because they don’t shoot well enough to make a game of it if they do.

The Wolverines can force the Tigers into bad shots and have Dickinson pound away inside. Dickinson is easily the best big man on the court and presents a matchup problem that Texas Southern cannot hope to match, and if the Wolverines keep going inside to him, the Tigers will have no choice but to either give up easy baskets or commit fouls. The game with Mount St. Mary’s showed that this is a foul-prone team, and if Texas Southern gets in foul trouble, the Tigers don’t have the depth to respond.

Michigan is still a question mark, and Texas Southern is coming off the high of coming back from down ten against Mount St. Mary’s. It’s going to take the Wolverines some time to get adjusted to playing in this situation, and this spread is too large to allow for any kind of adjustment period.

I think Texas Southern stays in this game for about 25 to 30 minutes before Michigan pulls away and ends up with a double-digit win, but that should be long enough for the Tigers to keep this within 20. Give me Texas Southern and the points. Bet the game LIVE while it’s happening at the best live wagering platform on the planet! —> Bovada Sportsbook!