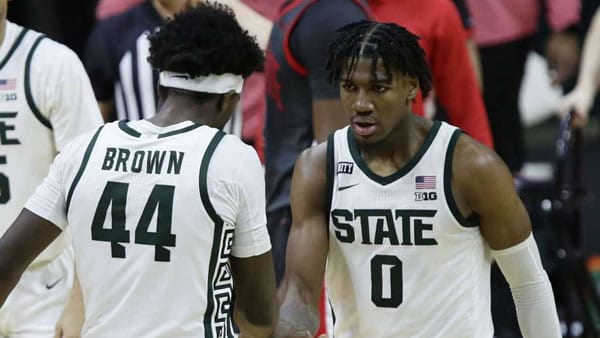 In a year of struggling blue bloods, there was no way the committee was going to miss a chance to send two former national champions to the First Four, and that’s precisely what’s happened in this matchup. Both teams quite frankly don’t deserve to be here, as Michigan State has been the most inconsistent team in the field, and UCLA enters the game on a four-game losing streak.
What we’ve got is a battle between mediocrity and inconsistency. UCLA has been middling all season, beating the teams it should beat while losing to stronger opponents. The Bruins have nine losses on their profile, but only one, Washington State, was a truly bad loss. At the same time, though, the only tournament teams the Bruins beat were Colorado and Oregon State at home, and those games were back in January.
Michigan State, on the other hand, features both a high ceiling and a high floor. The Spartans’ wins are better than any team in the nation, as they’ve beaten top seeds Illinois and Michigan and No. 2 seed Ohio State. At the other end of the spectrum, their profile also includes a 30-point loss to Rutgers, a 25-point loss to Minnesota, and a 14-point loss to Northwestern, the latter two of which didn’t come close to making the tournament. Michigan State has the ability to be still playing next week in the Sweet 16, but the Spartans are just as likely to flame out in their first game.

This is not a typical Mick Cronin team. UCLA doesn’t defend anywhere near as well as Cronin wants, and the results are reflected in the scorelines. Giving up 83 points to Oregon State in overtime is one thing, but the Bruins also surrendered 82 to Oregon in regulation two weeks ago and 81 in an ugly loss to Washington State. Beyond that, the Bruins’ offense can and has been shut down, which happened in a 66-48 loss at USC.

Quite frankly, the Bruins weren’t a great offensive team anyway and have only gotten worse since losing Chris Smith to a knee injury back in January. UCLA managed to play three strong games without him, but after that, things took a real turn for the worse. Since Jan. 14, the Bruins are just 3-11 ATS and only 1-8 ATS outside of Pauley Pavilion. This team is sinking fast, and there doesn’t appear to be a lot of reason for optimism around this squad right now.

More Picks: Get all of Dan’s tournament picks as they become available by bookmarking college basketball picks >>>

At this point, Tom Izzo and the Spartans probably believe they can beat any team in the country not named Maryland. For whatever reason, the Spartans just don’t get the job done against the Terrapins, who have pounded them twice in games that were expected to be close. Against everyone else since Feb. 20, Michigan State is 5-1 SU and ATS, with the one exception being the trip to Michigan.
The big question is, was that stretch more of a case of Michigan State figuring things out or sheer desperation to get into the tournament and avoid the embarrassment that Duke and Kentucky suffered? The inconsistency that has plagued Michigan State all season was on full display in the first half of the Maryland game, as the Spartans could have had an early kill against the Terrapins had they executed properly. Instead, Maryland fought their way back and eventually swung the game in the complete opposite direction.

To avoid a repeat, Aaron Henry has to take advantage of playing in his hometown. He’s been the Spartans’ leader all season long, and this is when Michigan State needs him the most.

Mackey Arena. Most times, when a team comes into the NCAA tournament, it’s playing in an NBA arena that it hasn’t seen all season, making the first few minutes an adjustment as teams learn how to shoot in a totally unfamiliar arena.
That’s not the case this time. UCLA will be making that adjustment, but Michigan State already knows how to shoot in Mackey because it already played here this season in a 75-65 loss to Purdue. The Spartans shot 43 percent from behind the arc against the Boilermakers, so shooting wasn’t the problem (Michigan State blew the game with 16 turnovers to Purdue’s 7) and shouldn’t be a problem Thursday. The familiarity with both the gym and baskets could give the Spartans an early edge that UCLA spends the entire game trying to catch up with.

The Spartans can get contributions from Rocket Watts and Joey Hauser alongside Henry. Henry can’t be a one-man team if Michigan State is going to have success, which the Spartans have found out the hard way this year. Hauser and Watts’ inconsistency has mirrored their teams, and if they play well, Michigan State will control this game. If they struggle, the Spartans are in trouble.

The main thing I want here is the under. UCLA usually struggles to score, and Michigan State is playing very good defense as of late. The Spartans have played their past six to the under, and this seems like another defensive struggle. That’s normally the way the Bruins like it, but this UCLA squad doesn’t seem to have the capability to play at such a high level on that side of the ball.
If this game does turn into a defensive struggle, I don’t think UCLA’s got the defensive capabilities to stay with the Spartans. It’s always a gamble to back Michigan State on the spread this season, but I think they can cover this small line. Give me the Spartans. Bet March Madness games LIVE-in-progress at the BEST live wagering platform on the planet —> Bovada Sportsbook! (50% bonus too!)