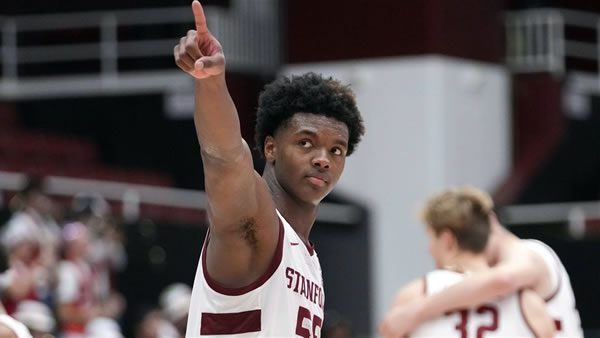 The recent trip to the desert couldn’t have gone much worse for UCLA, which took one expected loss and one that was completely out of nowhere. The Bruins were always supposed to lose to fellow powerhouse Arizona, but losing at league doormat Arizona State in triple overtime was a massive surprise that sent the Bruins out of the top 10.

Now they get a makeup game with a Stanford squad that’s been about as far as you can get from consistent. The Cardinal looked great against Washington (although the Huskies also looked fairly inept), but they put up just 60 points in a home loss to Washington State. Other than sweeping USC, Stanford has shown little consistency and seems to be on the outside looking in at the NCAA tournament. A home win over UCLA would be a badly needed Quad 1 win for the Cardinal, but Stanford lost by 23 points in Los Angeles and scored just 43 points in that contest. Can they flip the script and stick with a UCLA squad that really hasn’t played very well away from Pauley Pavilion?

The biggest question is whether the Bruins can get back to themselves after putting up one of their worst showings of the year at Arizona State. The second biggest question is whether UCLA can overcome the quick turnaround after going three overtimes with the Sun Devils and using three players for 50 minutes out of 55 in the contest (and Johnny Juzang likely would have played more if he hadn’t fouled out). The biggest problems for the Bruins against the Sun Devils were that their lack of depth got exposed and their shooting was off all night long. UCLA only shot 37 percent from the floor, not nearly enough to win most nights.

Against the Cardinal, the Bruins shot a similar percentage, but they got away with it because of their defense. The Bruins are always strong on defense, but there’s a difference between being strong and being ironclad, which is what you have to do to win when you shoot in the mid-30s. The Bruins lost because Arizona State was able to shoot 40 percent and cashed in on its 3-pointers, something that Stanford didn’t do in the first meeting. The Bruins have to either hit some shots or play ironclad defense again.

If Stanford throws the ball around like it did in the opening minutes against Washington, this isn’t going to go very well. The Cardinal got away with an ugly start against the Huskies because Washington was even worse and couldn’t cash in with the Cardinal’s turnovers. UCLA won’t make that mistake and has already proven that, having forced 22 Stanford miscues during the first matchup.

The other thing the Cardinal needs is better shooting from Harrison Ingram. In the Cardinal’s past five games, Ingram has shot 40 percent or better on three occasions, all of which ended up in the win column. In the other two games, the Cardinal couldn’t get above 60 points, wasting a good defensive effort. Stanford needs to get more out of both Ingram and James Keefe than it did in Los Angeles; something closer to the 34 points they combined for against Washington would be a big step toward a win.

UCLA will Cover If: The Bruins lock down on defense again. Stanford had no idea how to handle the UCLA defense in the first meeting, and the Bruins pride themselves on their defensive work. UCLA showed on the way to the Final Four last year that it knows how to force teams into rock fights, and it needs to do that again.

Stanford will Cover If: The Cardinal stop throwing the ball all over the court. 22 turnovers is not winning basketball, and Stanford only got away with 20 because it shot well after the slow start. UCLA isn’t going to be as forgiving as Washington was; the Cardinal must take care of the basketball.

I don’t think the teams will be as bad offensively as they were in the first meeting, but I don’t see much to suggest a high-scoring contest. Taking under 134 points seems like the right way to play this one.

I think Stanford can keep this close, but I am very worried about the turnovers. This is a game that I’ll look to live-bet, as I think Stanford covers as long as it doesn’t knock itself out of the game in the first six minutes with bad passes.

I might need another point or two here to feel safe, but I lean toward the Cardinal here. Question: Have you ever checked out Bovada Sportsbook? They have the absolute best live betting platform on the web, offer a 50% real cash bonus up to $250 on your first deposit, they give rebates on ALL your bets; even if they win and offer Bitcoin payouts within an hour! Online for over 20 years, this place is a must have in your sports betting arsenal! Click here to check them out!