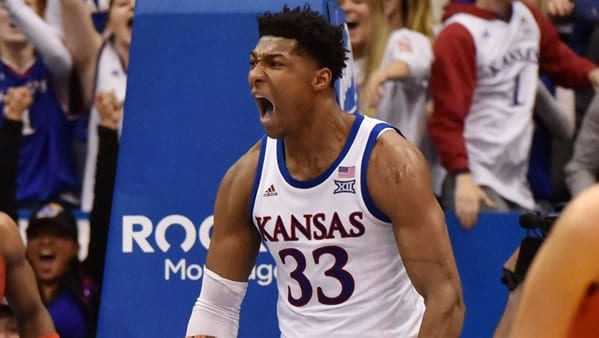 There’s something about No. 3 seeds in this second round, as Kansas is now the second No. 3 seed to have the public turn on it in the second round and make it an underdog against a lower seed. Of course, nobody ever said the public knew what it was doing, as the other underdog (Arkansas) came up with a win over Texas Tech, while the one favorite (West Virginia) couldn’t stop Buddy Boeheim and lost to Syracuse. (The fourth No. 3 seed, Texas, didn’t even make it to the second round, as it lost to Abilene Christian.)

So what’s the reason that the public has turned on the Jayhawks? It’s partially because the public just saw Kansas give up 84 points to Eastern Washington in a game where the Jayhawks trailed at halftime and partially because of how dominant USC was when it took on Drake. But the Jayhawks were still working David McCormack back into the lineup and had to play without Jalen Wilson because of COVID concerns, leaving their normally strong interior unable to stop the Eagles. With the Jayhawks getting back to full strength, do they have enough to keep the Mobleys from taking over this game?

USC drew the perfect matchup in round 1, as Drake had no answer for the Mobleys inside. Not only did the Mobleys combine for 32 points, but they shut down everyone on the Bulldogs’ roster except Joseph Yesufu, holding the rest of the Drake roster to 12-of-44 shooting for just 30 points.

There are two big questions with the Trojans: can they play consistent basketball and can they get better play out of their guards? USC has been outstanding at times, but the Trojans have also given themselves over to a few head-scratchers because their guard play has been spotty at best. USC has failed to cover in each of its past five games coming off a win, and at times, the results after a victory have been pretty awful. Losing to Colorado is no shame, but losing by 18 to the Buffaloes without having had to go to Utah first is pretty bad, especially after playing brilliantly against Oregon. The problem with USC is that you never really know what you’re getting from the team as a whole: if the Trojans’ guards elevate their play to that of the Mobleys, USC is tough to beat. If the Mobleys have to do everything on their own, the only way the Trojans are winning is if the defense comes up with a huge game.

Let’s be real here: if Kansas’ interior doesn’t get a lot stronger than what it showed against Eastern Washington, the Jayhawks don’t have much of a hope of getting to the Sweet 16. Kansas got away with it because quality big men rarely make their way to the Big Sky and because the Jayhawks are blessed with some outstanding guards. When Marcus Garrett and Ochai Agbaji play the way they did against Eastern and combine for 41 points, Kansas has a chance against anybody.

But a four-guard lineup isn’t going to work against USC, and the Jayhawks can’t win this game if they can’t make the USC guards beat them. They need McCormack and Wilson inside, especially McCormack. When McCormack came into the game against Eastern, the rest of the Jayhawks immediately woke up from their stupor and elevated their play. Even if McCormack isn’t contributing the way he has all season, his presence alone is enough to make him a big help to Kansas’ efforts.

The Mobleys can take over the interior. Kansas has to play the Mobleys to a draw inside and let the guards decide this game if the Jayhawks are going to advance, because USC has the big advantage in the paint. If the Mobleys are able to do whatever they want in the low post, the play of the SC guards won’t matter.

Kansas will Cover If: The Jayhawks can force the guards to beat them and neutralize the Mobleys. USC’s guards are not anywhere near as good as its big men are, and Kansas has a big advantage on the perimeter. The big question for the Jayhawks is whether they can force the game to be played 20 to 25 feet away from the basket. Colorado was able to do it by making the SC guards shoot, and they ended up 5-for-16 from behind the arc. The Jayhawks have to push this game to the outside.

Both of these teams know how to play defense, but the first half total is a little low in this one. 63 points should be doable for these two squads, especially if Kansas is able to get out and shoot. If you really want to get gutsy, you can snag a combination of over 63 in the first half and under 134.5 for the entire game, which some books are offering for around +500.

This might be a live-bet opportunity, as I need to see what Kansas has on the floor before I feel good about backing the Jayhawks here. But if you’re a little braver than I am, I think Kansas is the better team and can keep USC from taking over the game as long as it has its full team on the floor. This group of guards was good enough to handle Baylor and its outstanding guards, so if the Jayhawks can play the Mobleys to a draw inside, the SC guards shouldn’t have much hope of stepping up and winning this game.

Assuming Kansas is fully healthy, I’ll take the Jayhawks to overcome the doubters and get back to the Sweet 16. STOP wasting your hard earned money! STOP betting on games at -110 odds! Start saving BIG bucks TODAY by laying only -105 at BAS Sportsbook! We’ve advertised them for a decade with ZERO complaints!