Utah State vs. Fresno State Pick Against the Spread 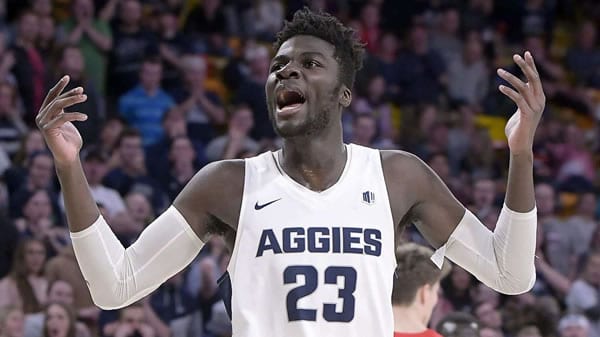 This is about as close to a must-win as it gets for Utah State. The Aggies have absolutely no margin for error if they want to earn an at-large bid to the NCAA tournament, and taking a loss at Fresno State would certainly qualify as a major error. That’s a worry for the Aggies because the Bulldogs are more talented than their record suggests and just proved it by handing Boise State a loss that the Broncos really couldn’t afford to take. However, the Aggies have been playing pretty well themselves, and they handled Fresno pretty easily on their first trip to California. Only Boise State (in the first meeting, which the Broncos won) held the Bulldogs to less than the 53 that Utah State gave up to Fresno when the teams played last month. A win here would take a lot of pressure off of Utah State, as the Aggies would likely only need to make it to the Mountain West semifinals to earn an at-large bid to In-dianapolis. Lose here, however, and USU’s only real path to the NCAA tournament would proba-bly be to win the Mountain West tournament.

On first glance, Utah State really doesn’t stand out all that much. The Aggies are middling shooters, don’t really have a high-scoring star grabbing all the headlines, and turn the ball over a bit more often than you would like. But what the Aggies do have is a 7-foot center in Neemias Queta, who can control the game down low simply through his presence.

Because of him and Justin Bean, the Aggies can rebound better than anyone else in the Moun-tain West, and it’s one reason they’re such a dangerous team in this league. It’s hard to control the pace of play when you’re frequently limited to one shot per trip because if you aren’t scor-ing, you’re either treading water or falling behind. The thing that really has to scare Fresno State is that Utah State didn’t even rebound all that well in the first matchup, winning the re-bounding battle by just one. But the Aggies won the game by 16, in large part because their de-fense forced so many bad looks that they never had to worry about dominating on the glass.

Say this for Fresno State: The Bulldogs absolutely fight hard. Fresno State might have a medio-cre record, but the Bulldogs’ heart has never been in question, as they’ve made some good teams work for their results. Case in point: the Bulldogs should have been dead in the water when Boise State went ahead double digits in the second half, especially considering that Fresno had blown a six-point halftime lead in about 10 minutes. Instead, the Bulldogs rallied and even-tually came back and won the game, holding the Broncos without a basket in the final five minutes. This is not a team of great shooters or rebounders (except for Orlando Robinson, who routinely pulls down nine boards a game and can actually match Queta in terms of size), but the Bulldogs have managed to stay in games because they don’t stop working and they have some decent guards in Deon Stroud and Isaiah Hill. Fresno makes teams work for everything, and that’s not easy to play against.

The MWC tournament. This game means essentially nothing to Fresno State because the Bulldogs’ only path to the postseason is by winning the Mountain West tournament. As such, Fresno State might opt to play this one a bit more conservatively and not tip their hand too much because the Bulldogs will likely have to go through the Aggies in order to get to the Mountain West title game. The Bulldogs will still be trying to win should the opportunity present itself, of course, but if Fresno ends up giving its starters a few extra minutes of rest, that would-n’t be the worst thing in the world for the Bulldogs. Conversely, Utah State needs to either do the job here or in the MWC tournament. Winning here could land the Aggies the second seed in the MWC tournament, which would mean no San Diego State until the conference tournament final. The Aggies did beat the Aztecs twice, but not having to play them a third time would be huge because the Mountain West essentially has four teams competing for either two or three spots. At least one will belong to San Diego State, which means the other three (Utah State, Colorado State, and Boise) have to either beat the Aztecs or position themselves to play them in the title game. That means this game is huge for the Aggies, as it’s their big chance to avoid the Aztecs until the end.

Utah State will Cover If:

The Aggies can play tenacious defense again. Fresno is likely to avoid getting blown out on the boards because of Robinson, but if the Bulldogs are taking wild shots again, the Aggies will keep the score where they want it and eventually wear Fresno down. In this game, the rebounding needs to be a backup, not the primary plan.

Fresno State will Cover If:

The Bulldogs show some patience to go along with their heart. What makes Fresno dangerous is that they make teams work on every possession, but that’s what makes Utah State dangerous as well. The Aggies make teams work for every shot (they give up 63.4 points per game), and if you aren’t willing to put in the work, you’re not going to find many good looks against this squad.

I don’t love this line. Utah State tends to play closer than it should, which is why it’s only man-aged to cover in one of its past five games. Meanwhile, Fresno has covered three in a row (and has managed to hit 67 points exactly in all of them) and has shown that it’s not giving up any-thing easy. I expect Utah State to emerge with a win, but I think the Bulldogs make them work for it. I’ll take Fresno and the points.