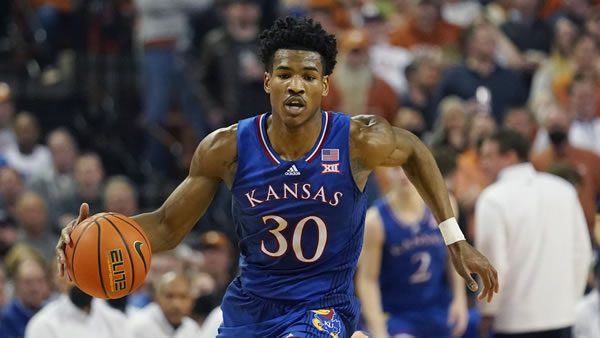 Can Villanova figure out how to play without Justin Moore after losing him in the regional final against Houston? The Wildcats are in the Final Four for the third time in seven years, but they’re down to just five healthy bodies from their regular rotation with Moore now on the shelf.

The Wildcats have two potential saving graces here: the fact that Kansas doesn’t have a deep roster either and that Villanova tends to slow down games and force opponents to wait for their shot. Kansas got a lot of good shots in a rout of Miami, and the Wildcats will have to try to take away the Jayhawks’ strong interior play without picking up any cheap fouls in the process. With Kansas coming off playing its best game of the tournament and Villanova just barely surviving, can the Wildcats find enough momentum to turn things around and overcome playing without Moore?

All year long, Villanova didn’t use its bench because it often had good leads and reliable leadership, making them dependent on roughly five or six players all season. When healthy, Villanova had one of the most effective starting lineups in the nation, thanks to the shooting of Collin Gillespie from behind the arc and accurate work from the free-throw line.

The good news is that Villanova doesn’t have to win with its offense to survive at this stage, as it proved when it handled Houston in the previous round. The Wildcats shot a mere 28.8 percent from the floor in beating the Cougars, but it didn’t matter because Villanova held Houston to five percent from behind the arc and didn’t allow its opposition to get much of anything in terms of quality looks for the game. Kansas represents a similar challenge, except the Jayhawks have a stronger inside game and will force Villanova to fight for rebounds throughout the contest. If the Wildcats can’t at least battle Kansas to a draw, they’re going to have to win the game with their offense.

Ochai Agbaji’s disappearing act had begun again against Miami, but the Jayhawks turned things around at the last moment and got a star performance in the second half, as Agbaji finished with 18 points and helped turn a six-point halftime lead into a 26-point rout of the Hurricanes. Locking down Villanova and its shooters might be a stiffer challenge, but Kansas does have an edge here if it’s willing to use it: its interior game. And that’s the trouble with betting Kansas: the Jayhawks are not always willing to use that edge to their advantage. They did it against Miami because they needed to turn the game around, but David McCormack still only played 18 minutes. It’s clear that Kansas prefers to put the game in Agbaji’s hands and will only go to McCormack or Jalen Wilson when it needs a way to turn the game around quickly. The Jayhawks might have to do that in this game because Villanova is likely to focus on Agbaji and has the defense to take him out of his game. Against the Wildcats, your second and third scorers usually need to be the ones who do the job.

Villanova will Cover If: The Wildcats can force Kansas to take their time and draw things out. Villanova is at its best when it uses the shot clock and waits for the right moment before trying to make its move. When the Wildcats rush shots, they run into problems pretty quickly. With depth not on their side, Villanova shouldn’t be trying to rush anything.

Kansas will Cover If: The Jayhawks can either establish Agbaji early or attack the paint on a regular basis. Kansas must go after Villanova’s weakness unless Agbaji has such a strong first half that the Jayhawks find themselves in control of the game. The Wildcats are not strong on the interior, and Kansas has to exploit that for all it can.

This is likely to be a defense-first battle. Villanova and Kansas have both shown they can stop opponents, as they gave up a combined 94 points in the regional final. The Wildcats also like a slow tempo, so it’s highly likely that they slow the game to a crawl and force Kansas to wait for opportunities. That puts the under in play.

Villanova has been here before, but not with a team that was this hampered. The Wildcats likely have the most talented team when everyone is healthy, but Villanova is not healthy and has little recourse if Kansas tries to attack inside. The Jayhawks have the right personnel here; give me Kansas.