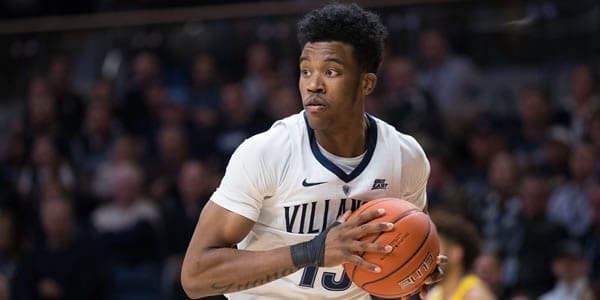 This is really the last stand for Villanova in defending the Big East crown, and it could be the last stand for the Wildcats before falling to a place they’ve never before been. Since the Big East split in 2013, Villanova has finished first or second in the new Big East every year prior to this one, but the Wildcats sit two games back of first with two to play, and they’re about to watch their title go to Seton Hall. So does Villanova have it in them to make one final stand and make the Pirates earn the title?

That depends on how well the Wildcats shoot the ball from deep. If the same shooting problems that appeared for ‘Nova in their match against Providence are apparent again. No Chance. Villanova shot just 16.7 percent from 3-point range in the Providence game, and that’s a real problem for a team that ranks third in the Big East in hitting their 3-pointers. That’s before you throw in that Villanova ranks 14th in the nation in made 3-pointers, which underscores just how vital the triple is to the Wildcats’ game. Villanova is going to keep tossing up 3-pointers throughout the game, and it’s a matter of whether Colin Gillespie and Saddiq Bey are hitting from outside. If they are, they’re in great shape. If not, it will be a long night.

The last time Seton Hall won a conference title, Bill Clinton was two months into his first year in the White House, and current Connecticut coach Dan Hurley was a key player for the Pirates. It’s been 27 years since the Pirates won the Big East, and the process has taken Kevin Willard nearly a decade to complete. But the final step remains for Seton Hall, as they’ve got to take down conference kingpin Villanova before they can officially call themselves champions.

To do that, they’re going to need to follow the formula that has worked well for them all season: ride Myles Powell and get him some help. When Powell has been hitting, the Pirates have been next to impossible to stop, as Seton Hall is 13-1 in the Big East when Powell hits at least 33.3 percent of his shots. What’s more, Powell is getting help in recent games in the form of Sandro Mamukelashvili, who’s proven to be almost as hard to guard as his name is to spell. In the Pirates’ win over Marquette, Mamukelashvili hit 10-for-13 from the field and scored 26 points, enabling the Pirates to easily win the battle against Markus Howard. If both he and Powell get going again, it’s hard to see Villanova keeping up.

The Big East title. This is a major pressure situation for Seton Hall, one that the program hasn’t seen in quite some time. Not only do the Pirates have a chance to bring home a conference title, but they get to do it on their home court and against Villanova, the team that has been the gold standard in the Big East since the split. But the pressure is even higher because this is the final home game of the season for the Pirates, meaning it’s also the last home game for Myles Powell. Plus, the schedule did the Pirates no favors. Lose this game, and not only does Seton Hall fail to clinch the conference title in front of its home fans, but it has to try to do it in Omaha, Neb., against Creighton, the hottest team in the Big East and perhaps the hottest team in the country.

Creighton isn’t just playing well at the moment; it’s also beaten the Pirates in Newark earlier this season. What that means is that if the Pirates don’t get the job done against Villanova and Creighton wins at home tonight against Georgetown, the Pirates will spend Saturday afternoon in a winner-take-all showdown against the Bluejays in front of a packed building in Nebraska. To state the obvious, Seton Hall wants to avoid that situation at all costs, ramping up the pressure on this squad.

The Wildcats can hit their 3-pointers. Villanova’s game is based very much on finding open looks and draining them. That’s how the Wildcats have consistently played under Jay Wright for the better part of two decades, and it’s precisely what Villanova didn’t do against the Pirates in Philadelphia when the Wildcats shot a mere 33.3 percent from the arc. Villanova has to hit shots to keep up with the Pirate offense.

Seton Hall will Cover if:

The Pirates can avoid turning the ball over. Seton Hall had 14 giveaways last time, and it nearly cost them in a tight contest. The Pirates’ best chance to win the game is to maximize their number of possessions because they know what they’re doing when they can get their shots off. If the Pirates are taking shots instead of giving the ball away, it’s their game to win.

Dan’s Pick to Cover the Spread: With all that Myles Powell has meant to this program, I just can’t see him losing an opportunity to finally bring a championship home to South Orange in his final home game of his career. Powell has been the fuel that makes Seton Hall run throughout his college career, and it’s rather fitting that he’d end his time in college by completing the Pirates’ resurrection to the basketball elite. This is a proud program that has gone too long without a conference title, and I have a feeling that ends tonight. Give me the Pirates to finally end the drought with a cover.