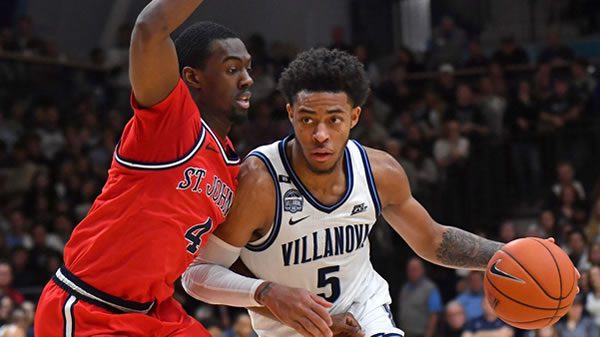 Now’s the time for UCLA to prove it’s really returned to the ranks of the elite, as this marks the Bruins’ first real test since making an unlikely run from First Four to Final Four. UCLA had an outstanding tournament last season in winning five games, but the Bruins were also a flawed 11th seed that got a lot of luck on its path to the Final Four. However, the way they battled Gonzaga toe-to-toe and almost won suggest that the Bruins might be for real.

However, it’s going to be an even year when the season ends, and that means it’s likely time for Villanova to make a run of their own this season. The Wildcats have won the past two national championships awarded in an even year and look very capable of making it three titles in seven years if they get the right draw. Villanova is one of the most experienced teams in the nation, and the Wildcats looked the part of experienced and talented in blowing out Mount St. Mary’s in the opening game. But this is a true road game against a team looking to prove itself, and it’s also one that the Wildcats will be playing in the middle of the night by their body clocks.

When you shoot as well as Villanova did against Mount St. Mary’s, it really doesn’t matter what the total is; the over is going to hit. The Wildcats hit 16 3-pointers against the Mountaineers and turned the ball over just six times, making sure that the game was never in doubt from the first minute to last. Guards Justin Moore and Collin Gillespie shot a combined 9-for-16 from behind the arc, and as a team, Villanova shot 53.3 percent from deep.

That likely won’t happen again in this game, which means the Wildcats are going to have to play a more typical style for them in methodically finding their shots. 91 points are usually not the way Villanova likes to play, as the Wildcats much prefer a game where they work for their shots and force their opponents to do the same thing. That’s also UCLA’s style, though, so the Wildcats will either need to hit shots as well as they did against Mount St. Mary’s or rebound a lot better than they did. Villanova won the rebounding battle just 27-26 against the Mountaineers, and that can’t repeat against a UCLA squad that dominated the glass in its opener.

Sixty-two shots isn’t happening against Villanova. UCLA allowed Cal State-Bakersfield to run a little bit because the Bruins need that experience, but they’re also quite comfortable in a slower-paced game, similar to the way they beat Michigan in the Elite Eight last year. UCLA is kind of a chameleon in that it can adapt its game to whatever style its opponent prefers, making it a difficult team for opponents to get a handle on.

But that can be a double-edged sword because the Bruins were equal parts brilliant and baffling a year ago. UCLA had a great run to the Final Four, but the Bruins were nearly undone in the First Four against a mediocre Michigan State. If UCLA doesn’t get its shots to fall early, this is going to be a tough ask.

The Wildcats can limit the Bruins to one shot per trip. Villanova is excellent at forcing teams into bad looks, but UCLA rebounds a lot better than Mount St. Mary’s and can easily extend possessions if the Wildcats can’t body them up. Not losing the battle on the glass will be crucial.

Johnny Juzang and Jaime Jaquez can win the battle with Gillespie and Moore. Getting frustrated against Villanova is an easy thing to do, and if the shots aren’t dropping early, this could turn into the exact type of game the Wildcats love. UCLA has to make sure it’s playing on its terms by hitting the few good looks it will get.

This total seems too high. Villanova is likely to slow the game down, and UCLA isn’t going to try to get in the way of that. Unless Villanova shoots the lights out again, this is likely to be a game in the 60s.

I’m still not completely sold on UCLA as a top-five squad. The Wildcats are a great team that’s full of experience and a genuine contender. The Bruins were a middling squad a year ago that rode a fluke run to the Final Four and have yet to prove that they’re really an elite team again. UCLA might very well get there, but I’m not laying points with them until I see it for myself. I’ll take Villanova.