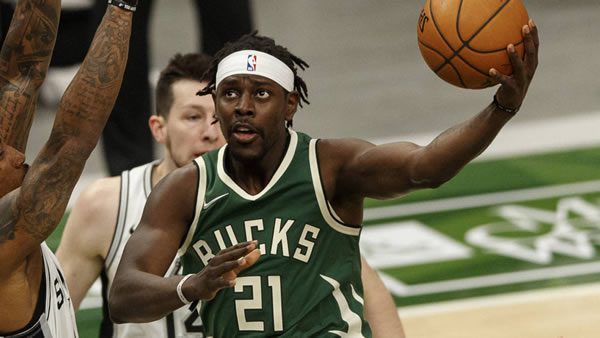 Bucks
Donte DiVincenzo: foot (OUT) Brook Lopez: back (OUT) Khris Middleton: illness (OUT)

The Milwaukee Bucks enter today’s game, having won 2 straight games. In their past ten contests, the reigning champs have played just .500 basketball, going 5-5.

As the road team, Milwaukee travels to Boston with a positive plus-minus rating of 2.9 points. Overall the Bucks are ranked 18th among NBA teams in point differential (5.7). Among NBA teams, they have played the 6th toughest schedule.

For bettors, taking the Milwaukee Bucks to cover the spread has yet to pay off as they are covering in 50.00% of their games.
season-long plus-minus against the spread is -2.1.

On offense, the team’s leading scorer is SF Giannis Antetokounmpo. So far, Antetokounmpo is averaging 26.58 points per game. This total places him third among power forwards. The Greek Freak has also been a monster on the boards, grabbing 11.83 per game.

The Bucks’ best three-point shooter has been Grayson Allen, connecting on 3.67 shots from downtown per game.

The Boston Celtics enter today’s game, winning five of their past ten games. The Celtics have played at a below .500 rate when playing in Boston, having gone 1-3. This record has come while playing the 14th toughest schedule.

As they take on the Bucks at home, the Celtics have a negative home plus-minus of -9.8 points. Overall the Celtics are ranked 17th among NBA teams in point differential (0.9).

For bettors, taking Boston to cover the spread has been a winning bet as they are covering in 54.50% of their games. Their season-long plus-minus against the spread is -1.3.

On offense, the team’s leading scorer is SG Jaylen Brown. So far, Brown is averaging 25.62 points per game. Brown has also been the Celtics’ best three-point shooter, connecting on 2.88 shots from downtown per game.

Veteran Al Horford has been in charge of cleaning up the glass, hauling in 9.0 boards per game.

In this game, both teams prefer to play a more up-tempo style of basketball. However, when the Celtics take on teams near the top of the league in possessions per game, the contests finish several possessions below expectation. The Celtics also have their highest winning percentage against up-tempo teams.

The key matchup to watch in this game will be how Boston handles Milwaukee’s offense. Over the past several seasons, the Bucks have remained in the top 10 in offensive efficiency. Traditionally, the Celtics do not handle good offensive teams well. On average, they give up 4 points per possession above expectation. This lack of defense has hurt them as their winning percentage against good offenses is just 39%.

To make matters worse, when Milwaukee plays teams near the league average in defensive efficiency, they score 6 points per possession above expectation. This output is good for a winning percentage of 64%. However, they win these games by just a 3 point margin.

60% are betting the Bucks against the spread.
57% are wagering on the game to go over the posted total of 214.

After some early-season inconsistency, the Bucks have suddenly rattled off two straight road wins. Newcomer Grayson Allen has provided some much-needed shooting from the outside. Games between the Celtics and Bucks are always tightly contested affairs. With Milwaukee still without Khris Middleton, I expect Boston’s star players, Jaylen Brown and Jayson Tatum, to help the Celtics come away with this win. I recommend taking Boston on the Moneyline.

Even though I have the Bucks losing this game, I will be looking to take Giannis Antetokounmpo to go over his player prop line. Although these lines have yet to be released, the Greek Freak always gets up for his games in Boston. Looking up and down the Celtics roster, there is no one on the team with the defensive skills and strength to keep Giannis away from the basket.