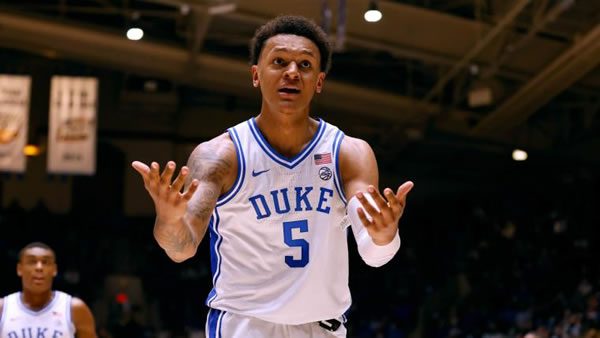 If ever a team needed a win on the road, it’s Wake Forest, which has 20 wins to its name yet hasn’t managed to really get the kind of signature win to ensure that it’s in the field. Despite their gaudy record, Wake is still sitting on the 8/9 line in the first round, which both speaks to the overall weakness of the ACC and the Deacons’ lack of quality wins. Wake gave away another chance to pick up a win for the resume when it fell to Miami, making this opportunity critical.

But is it doable for the Deacons? Wake is playing Duke at what could be an awful time, considering that the Blue Devils are coming off playing another languid game and just getting by a weak Boston College team. The last time the Blue Devils were in Cameron, they played with fire and got burned, allowing Virginia to steal the game with a last-second 3-pointer. If they’ve learned the lesson from that duel with the Cavaliers, Wake could be in serious trouble.

When you outrebound Duke, you’ve usually done some great work, and you’re likely to put yourself in a position to win the game. Wake lost by 12 when the teams met in Winston-Salem, mainly because the Deacons just could not hold on to the ball. The assist-to-turnover rating in that game was simply horrendous, as Wake had just seven assists against 15 turnovers in a home contest and basically threw away its rebounding edge, giving Duke an extra seven shots in a game where that could have been critical.

Turnovers have killed Wake all season long, as the Deacons throw the ball away on roughly one of every four possessions. When the Deacons hold on to the ball, Daivien Williamson and Jake LaRavia are solid shooters from behind the arc, and Alondes Williams is the rare guard who gets inside the perimeter and does his damage from there. The Deacons can score when they hold onto the ball; the problem is that they just make too many mistakes with their passing.

Will getting some rest help Duke get back to full strength? The Blue Devils really weren’t themselves against Boston College, and part of that might have been because they didn’t get to Massachusetts until Friday night, taking away much of their preparation time before playing against a subpar Eagles squad.

Duke got through it because the Blue Devils are simply the more talented squad, but Duke’s going to have to put up a better showing on the boards than it did against Wake Forest the first time around. The Blue Devils played that game without Mike Krzyzewski on the sidelines and looked like they were thinking about him and not the task at hand, as they weren’t anywhere near their potential before emerging with a 12-point win. This time, Duke will have to do a better job of getting more out of Paolo Banchero and keeping Mark Williams on the floor. Williams had seven rebounds but also four fouls, which allowed Wake to focus more on Banchero. Duke needs both on the floor.

Wake Forest will Cover If: The Demon Deacons can stop giving Duke free possessions. It seems a simple thing, and that’s because it is. If Wake holds onto the ball and rebounds as it did in Winston-Salem, it wins. If the Deacons turn the ball over again, this gets ugly.

Duke will Cover If: The Blue Devils can put their height to good use. Duke has the stronger and taller team and needs to play like it this time. If Duke can dominate in the interior, the Blue Devils should easily pull away.

When a team turns the ball over as often s Wake Forest does, that likely leads itself to an “Over” play. The Blue Devils should be rested and in a mood to push the tempo in this game.

Wake Forest already showed it couldn’t hang with Duke when it did almost everything right, and that was at home. I don’t think this is going to go any better for the Demon Deacons. I think Duke cruises here. Bet your Wake Forest vs. Duke pick and ALL your college hoops predictions for FREE this week by taking advantage of a 100% REAL CASH bonus on your first deposit of $100 to $1000 at Betnow Sportsbook!