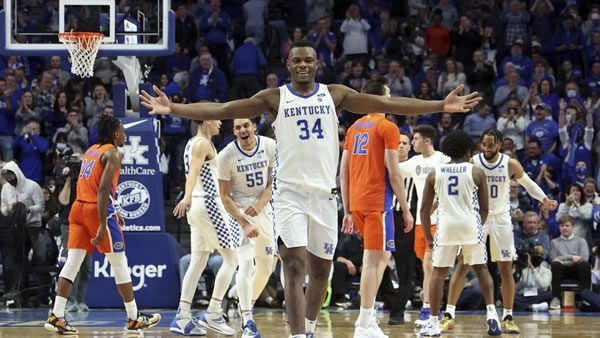 It would be hard for a game to go much worse than Tennessee’s loss to Kentucky in the first meeting did for the Volunteers, which is one reason why you shouldn’t read too much into that game. In that contest, virtually everything that could possibly go wrong for the Volunteers did, as they allowed Kentucky to shoot 68 percent from the field and lost by 28. Any time you let a team shoot that kind of percentage, you have virtually no shot to win the game.

And that’s why John Calipari actually has the harder job in this game: he’s the one who has to find a way to get his team to ignore the first game and focus on trying to beat a good Tennessee team on the road. All Rick Barnes has to do is post “107-79” on the scoreboard and he should have his players’ attention. With a young team as always, Kentucky is far more prone to the letdown game in a return meeting than the average opponent might be. Can the Wildcats avoid slipping here?

If Kentucky is going to win this game, it’s going to be because Oscar Tshiebwe stepped up and led the Wildcats to a win. Tshiebwe isn’t just Kentucky’s strongest weapon, he’s also the Wildcats’ veteran leader and has seen tough tasks before when at West Virginia. In fact, Tshiebwe is uniquely positioned to put the past behind him here, because he actually didn’t play all that well against the Vols the first time. He grabbed his usual double-digit rebounds, but he scored just nine points while TyTy Washington and Sahvir Wheeler combined for 49.

On one hand, that’s great for Kentucky that it can win while Tshiebwe isn’t having a strong game. On the other, Washington and Wheeler are not going to combine to shoot 18-for-23 again, which means that the big man has to step up and do his job this time around. Kentucky played a perfect game against Tennessee the first time; they’ll have to at least play a good all-around game in this matchup to get a win.

Here’s another reason that Barnes should have his players’ attention for this game: Tennessee is coming off an awful shooting night against Vanderbilt. You’re not going to win many games where you shoot 22-for-60, but Tennessee did because it was aggressive on the boards and extended its possessions. That has to replicate itself this time around. In fact, Tennessee actually did plenty to win the game in Lexington; the Volunteers just ran into a buzzsaw from Wheeler and Washington’s shooting. Based on the rebounding numbers and its own shooting, Tennessee did enough to beat a lot of teams when it played in Rupp Arena.

The two things the Volunteers didn’t do were defend and take care of the basketball. There’s not a lot you can do when a team shoots 61% from behind the arc; all you can do there is tip your cap and move on to the next game. But you can certainly do a lot about turning the ball over, which Tennessee did on 20 occasions against the Wildcats in that game. Obviously, the Vols cannot be anywhere near that sloppy if they’re going to have a chance.

Kentucky will Cover If: Tshiebwe dominates the interior like he usually does. The Wildcats won the game comfortably in Lexington, but not in a way that they can actually replicate. If Kentucky tries to play the same way it did in the first meeting, it’s going to lose. Tshiebwe has to be the difference.

Tennessee will Cover If: The Volunteers can get shots instead of turnovers. Tennessee doesn’t turn the ball over a lot on most nights, so this is just a matter of Santiago Vescovi and Kennedy Chandler playing the way that they have for most of the season. As long as the Vols play their game, they have a chance.

Kentucky has won on its past two trips to Tennessee, but prior to that, the Volunteers had won four straight meetings in Knoxville. Tennessee should be ready to play after being embarrassed last time, and the way that Kentucky won that game was by catching lightning in a bottle, not by outplaying the Volunteers. Give me Tennessee here. Note: Be sure to check out our Tuesday NBA picks!