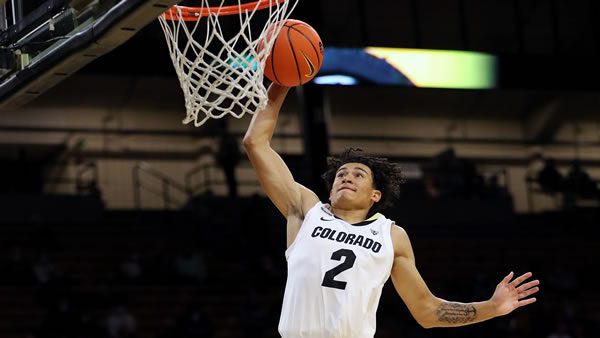 Two teams with negative conference records take to the floor of the CU Events Center on Thursday night when Washington visits Colorado. The CBB betting board lists the Buffaloes as a large -9.5 spread favorite with a total line of 140 points.

Washington is coming off an 81-78 win over California. However, they did not cover the spread in the game as -10 point favorites. The combined 159 points finished above the 131.5 total line.

Colorado most recently fell to UCLA (68-54). Not only did the Buffaloes lose straight-up, but they picked up an ATS defeat as +11.5 point underdogs. The combined 122 points did not surpass the 136 total line.

Washington
Over their last five games, Washington has a straight-up record of 2-3 while going 3-2 vs. the spread. Over this stretch, the Huskies’ offense averages 69.6 points per game while hitting 43.6% of their shots from the field. On the defensive end of the floor, they have allowed opponents to shoot 39.5% from the field while allowing 72.8 points per contest.

Colorado
In their previous five contests, Colorado is 2-3 straight-up and 2-3 vs. the spread. In these five games, they have a scoring average of 64.2 points per game on a shooting percentage of 40.8%. Defensively, they allow teams to hit 39.9% of their shots while giving up 59.8 points per game.

How Does Washington Fare On The Road?

For the season, the Huskies have played five road games and have a record of 1-4. In these contests, Washington is 3-2 vs. the spread. Offensively, they have averaged 65.0 points per game on a shooting percentage of 40.6%. On defense, the Huskies allow 70.0 points per contest when playing away from home. So far, opposing teams have a field goal percentage of 42.3% in these games.

How Does Colorado Fare At Home?

In their nine games at home, Colorado has a 5-4 record vs. the spread while going 8-1 straight-up. On offense, the Buffaloes are shooting 47.2% on their home floor, leading to 76.3 points per game. Defensively, opponents are shooting 39.4% in these contests. The Colorado defense is allowing 61.2 points per game at home.

For the season, Washington is averaging 68.5 points per game (287th) while posting an overall field goal percentage of 42.2%. In today’s game, they will be matched up against a Colorado defense that has allowed an average of 66.7 points per contest. This year, opponents have hit 41.4% of their shots vs. Colorado. On the other side, the Colorado Buffaloes are coming into the game averaging 71.2 points per game on a shooting percentage of 44.3%. The Buffaloes will be facing a defensive unit allowing an average of 68.6 points per contest. So far, teams have hit 41.4% of their shots vs. the Huskies.

From beyond the arc, Washington has a shooting percentage of 30.3% while ranking 424th in attempts per game. The Huskies will be facing a Colorado defense that has a 3-point field goal shooting percentage allowed of 32.3%. Colorado enters the game having hit 36.8% of their looks from deep while averaging 6.97 made 3’s per game. On the other end, Washington has allowed opponents to hit 30.4% of their shots from beyond the arc.

Colorado has proven they can blow out teams at home, as shown by their blowout 68-41 victories over Oregon 62-42 and Oregon State. That said, I don’t like the way the Buffaloes are coming into this game. They haven’t shot over 41.2% from the field in their last three games and will face a team that is arguably shooting the best they have all season, albeit against easier. They’re facing the team tonight that held them to just 63 points in their earlier meeting on the road and a team that is allowing just 39.5% from the field over their last five. I’d also like to add that Washington had an FG% of 50% in the earlier meeting, and I don’t see them hitting anywhere near that mark on the road, where they averaged just 40%. Take the UNDER 140. Bet your college basketball predictions for FREE this week by snagging a 50% real cash bonus at the web’s best sportsbook, which has the BEST live wagering platform on the web! It’s where we wager! —> Bovada Sportsbook!