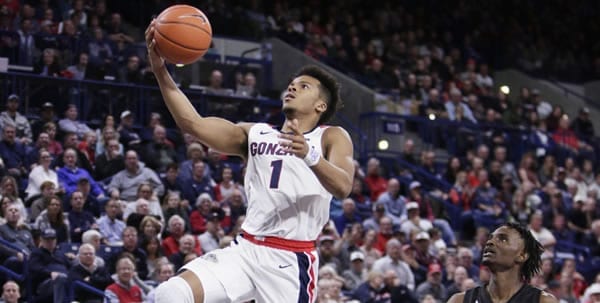 The Dons haven’t lost since going up to Spokane, and they’ve looked pretty darn good in the process. San Francisco easily beat Pacific and Loyola Marymount to get itself into this position, and the difference has been quality defense and the scoring of Charles Minlend. Minlend is the Dons’ leading scorer, but he’s far from a consistent option on offense. In West Coast Conference play, he tended to come up small against the biggest teams, scoring 12 or less in four out of six games against Gonzaga, Saint Mary’s and BYU. In tournament play, however, he’s been at the top of his game, scoring 16 against Loyola Marymount and 21 against Pacific to help his team to a pair of easy wins. The Dons also have a strong inside presence that most teams do not have against Gonzaga, as Jimbo Lull remains a real threat to take over the game.

Check out our list of the Best Cryto Sportsbooks

In all honesty, Gonzaga probably would have preferred to play Pacific. The Tigers weren’t even close to being competitive against Gonzaga in their one meeting, while the Dons put a real scare into the Bulldogs in San Francisco. For Gonzaga to get its 30th win of the season, the Bulldogs need to again get quality play from their forwards, specifically Killian Tillie. Tillie dominated the game in Spokane by hitting 10-for-13 from the floor and grabbing nine boards to lead all scorers with 22 points. Tillie actually could have gotten more, but he fouled out during the contest.

But as strong as Tillie is, Filip Petrusev is Gonzaga’s most important player. Petrusev is the WCC player of the year, and he’s got to be at his best to prevent San Francisco’s strong interior game from getting established. At 6’11”, he’s a true matchup nightmare for most teams and has proven himself a truly outstanding player throughout the season. Only BYU has found a way to slow him down, and if he’s at his best, this won’t end well for San Francisco.

Desperation. San Francisco is the only team left in the WCC tournament that doesn’t have an NCAA bid waiting for it when this tournament is over. The Dons’ only path to the tournament is to beat Gonzaga and then beat BYU or Saint Mary’s on Tuesday, which would put them in the Big Dance for the first time in 22 years. That means the Dons have literally everything to play for and will play like a desperate team in this contest.

Gonzaga might say that the WCC tournament is a big deal to them after last season, but the fact remains that Gonzaga is not a program that is concerned with winning a conference tournament championship. The Bulldogs have done that in 18 of the past 22 seasons, so winning in Las Vegas would be nothing new. Gonzaga is concerned with winning a national championship, and that’s inevitably going to make what happens in Las Vegas less of a priority to the Bulldogs than it is to the Dons. Can Gonzaga find a way to make its talent advantage match the Dons’ mentality?

Get all of our handicapper’s top tournament picks as they become available!

The Dons can get off to a fast start and keep Gonzaga from getting itself into the game in the first 10 minutes. If the Bulldogs don’t get off to a solid start and the Dons do, Gonzaga might decide that it’s time to start focusing on the NCAA tournament and take the rest, knowing that they don’t have anything to lose by losing this game. San Francisco needs to make Gonzaga rationalize a loss if they’re going to have any hope at stealing a win.

The Bulldogs can keep Tillie on the floor. Jimbo Lull is a tough matchup, and Tillie is going to be needed from beginning to end to keep him from taking over in the paint. If Tillie gets himself in foul trouble, San Francisco will have an opportunity, and this game will end up closer than people think it should be. If Tillie stays on the floor, Gonzaga has a considerable edge.

Gonzaga is the better team without question, but the question here is whether the Bulldogs are going to be genuinely motivated to go after the WCC title. San Francisco is good enough to take advantage of the situation if the Bulldogs aren’t ready to play this game, but if Gonzaga is prepared to play, the Dons really won’t be able to keep up in this contest.

For me, I don’t think Gonzaga is going to get caught napping here. The Bulldogs got caught sleepwalking in the final last year and allowed Saint Mary’s to steal a bid, but I think the Bulldogs have learned from that mistake and will play its normal game. When Gonzaga’s playing its standard game, San Francisco isn’t good enough to stay close enough with its offense. Give me the Bulldogs to get the cover and reach the WCC final.Where are you betting your March Madness picks? If you’re still laying -110 odds on games, YOU’RE OVERPAYING! Stop that noise TODAY and start betting more wisely by taking advantage of the -105 odds offerings at 5Dimes Sportsbook! You’ll be SO glad you made the switch! Click here to start saving big bucks!