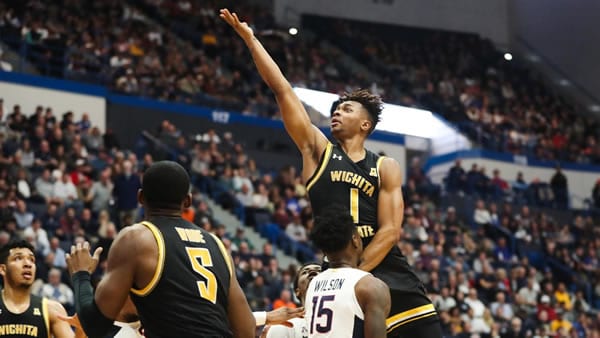 This was supposed to be a down year for Wichita State after a scandal cost Gregg Marshall his job, but Isaac Brown has done just fine in his first year as the man in charge in central Kansas. Of Wichita State’s three losses, two are to ranked opponents, and the third was to a decent Ok-lahoma State squad that has a win over Kansas on its resume. Instead of falling without their coach, the Shockers have banded together nicely, sitting in a solid second place in the American behind Houston.

It’s Memphis that’s been the disappointment. The Tigers have played great defense under Pen-ny Hardaway, but they can’t put the ball in the net. Memphis averages 70.7 points per game, but that’s a deceptive number because the Tigers have played Mississippi Valley State, Arkansas State, and Central Arkansas, who all rank in the bottom 50 in defense (and Mississippi Valley State is dead last in the nation). The only league game where they’ve broken 60 points was against Tulane, and that only because the Tigers grabbed 44 rebounds. With the offense still sputtering, can Memphis ride its defense to get itself back in the race for the American?

Football fans know “T. Etienne” for scoring touchdowns at Clemson, but Tyson Etienne (no rela-tion) is making a name for himself in his sophomore season at Wichita State. Etienne has scored 20 or more points in three of the Shockers’ past four games, and he’s the only player that Wichita State really can’t afford to lose, as he averages 17.9 points per game.

Beyond that, Wichita State has several players who contribute but nobody who ever takes over a game. The Shockers are not a team of great shooters or high scorers, but they win because they get the job done on the glass and consistently find the right shot when it comes. Wichita State grabs 40.9 rebounds per game, a mark only bettered by Houston among teams in the American.

Look at the stats, and you wouldn’t expect the Memphis offense to be as weak as it is. After all, four players average in double figures, Memphis rebounds well, and the Tigers don’t have a bad shooting percentage as a team.

So why is Memphis having so many problems? Simple: The Tigers have no idea which parts go where, as they have ten players who are on the court for 13 minutes or more per night. When everyone is contributing, that can work out well, but Memphis isn’t getting much from more than half of its players.

When he’s been on the court, DeAndre Williams has proven a solid contributor, but the problem there is that he’s had a devil of a time staying out of foul trouble. Williams hasn’t fouled out yet, but he has picked up four fouls in three of the four games he’s played in, which has taken the Tigers out of their offense.

More Picks: Get all of our college basketball picks >>>

Rebounding. Both of these teams are solid on the boards, and neither one is all that great on the offensive side of the ledger. That means that getting extra bites at the apple on offense is critical to both teams’ efforts to boost their offensive production, and that means both teams have to have their best games on the boards. Whichever team leads on the glass is likely to have a big edge in this game.

Wichita State will Cover If:

The Shockers can get Williams in foul trouble early. Take Williams off the floor, and you take Memphis’ interior offense out of the game. With how important rebounding is going to be in this game, Wichita State has a significant advantage if it can get Williams out of the way and allow its depth to wear down the Tigers. Memphis can’t do that because the Shockers have far more depth and aren’t dependent on one player, but Wichita State can certainly do it to the Ti-gers.

Memphis will Cover If:

The Tigers can get good shots inside and actually hit them. Turnovers aren’t a thing that either side has to worry about, so Memphis simply needs to make its shots when they come around. The Shockers’ defense is good, but not great, and Memphis can absolutely exploit it if Williams stays on the floor.

Memphis hasn’t been covering at all this season, and the Tigers have looked poor against Amer-ican conference foes. Wichita State hasn’t looked impressive on paper, but the Shockers are get-ting the job done against some good teams and appear to be much better at figuring out who they are and how they can win than Memphis is.

With the Tigers finding new ways to come up small against league opponents, I don’t feel com-fortable trusting them here. Give me the Shockers and the points. Bet your WSU/Mem pick FREE by taking advantage of a 100% real cash bonus on your first deposit of $100 to $500 at GTBets Sportsbook!