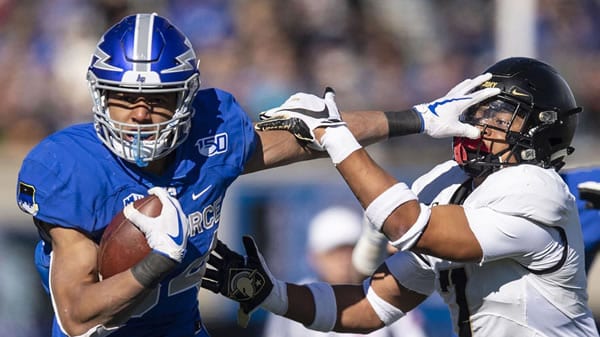 The Air Force Falcons come to West Point on Saturday for a showdown with the Army Black Knights. Army had last week off, sitting pretty after a 6-1 start to their season. In their last game, they beat Mercer, 49-3, and should have it a lot tougher this week against the Falcons. Still, they’re feeling pretty good about themselves, having already surpassed last season’s win-total. Air Force, meanwhile, fell to 1-2 with a 49-30 loss to Boise State on Saturday. It was a strange game, with Air Force out to a quick lead, before Boise went on a frenzy before Air Force closed strongly to make it look a little closer than it was. Who can get the job done this week?

The Strangeness of the Matchup

There is nothing strange about Army playing Air Force, but when a team plays seven games and on their week off, their opponent is just playing their third game, it’s a little bizarre. You have to wonder how this will all resonate, as there will be matchups between teams with varying track records. You wonder if the edge goes to the more-oiled football teams or the fresher ones, and it might not be easy to decipher, especially when Air Force’s three games were against respectable Mountain West teams, while Independent Army has been beating up on some softies in light of what was a limited opponent-pool.

Has Army Had it Easy?

Not to impugn the success of the Jeff Monken-led squad, but when you’re playing teams like Mercer, it’s easy to look good. In their only loss, they were marginally-respectable against a good Cincinnati team, but that’s also their only legit opponent. They have three wins over FCS teams while also topping a pair of Sun Belt teams and a bad Conference-USA team in Middle Tennessee. They’re doing what they’re supposed to be doing, and a 5-2 ATS record shows they’re performing well.

COLLEGE KID BONUS: DEPOSIT $25, GET A FREE $50 BET! MUST USE BONUS CODE: ROOKIE200. FIND THIS SWEET OFFER AT INTERTOPS SPORTSBOOK!

A little more than a year ago to the day of this game, Air Force beat Army at home, 17-13. For an Army team that found success elusive, it was a good showing, and they easily covered as 17-point underdogs. It was really a weird game, with Army and now-departed QB Jabari Laws taking to the air far more than normal, finding some success, while Air Force’s run-game was more effective, and they were able to nose Army at the wire.

No Secret in Army’s Approach

They run the heck out of the ball. The fact that their leader in pass attempts is Christian Anderson (questionable) with 28 attempts in 7 games attests to how much they focus on the run, with their “flexbone” offense with three backs. It has resulted in nearly 34 points a game, more than enough with a defense that has been excellent, albeit against limited opposition. With nine different runners in triple-digit yardage, they throw many different looks on defenses and keep rotations pretty fresh. Shoddy opposition or not, they definitely are locked into a good formula and look significantly-upgraded from the hit-and-miss team we saw last season.

Key to Army’s success this season is a stout and swarming defense that has held opponents to an average of 11.7 points. They have been tremendous against both the run and pass. They’re getting a lot of playmaking, with different guys getting to the quarterback, some turnovers in bunches, and even a few scores. They held a good Cincy team to their season-low in points. But we also have to face up to the facts that stifling Abilene Christian, Citadel, Louisiana-Monroe, Mercer, and the like isn’t necessarily a roadmap to success at this level.

More Picks: Get our team’s college football betting analysis with against the spread picks

Whose Run-Game Can Surface?

For as good as Army runs the ball, Air Force might even be better. That type of one-dimensional offense might not always work against the better and more-complete teams from their conference, but against a similarly-themed squad, we could see it pay off. Even in losing fashion on Saturday, a trio of Falcons’ players ran for at least 87 yards, with QB Warren Bryan getting involved, along with backs Brandon Lewis and Elija Robinson.

Things started out nicely for the Air Force defense in their belated start to the season. In holding Navy to 7 points, we saw a lot of good things, and it carried over into the next week with San Jose State when they held them scoreless in the first half. But since then, in allowing the Spartans to go on a spurt in the second half and their total collapse against Boise, we’ve seen them flailing around some. And a lot of MWC teams will be made to look foolish by Boise. But against an Army offense that has been dependable, they might get tested.

Despite a 1-2 Air Force team that has looked ragged in spots over the last two weeks, I think this game finds Army in a heightened context. They are better and deserve credit for a nice start, in addition to delivering for bettors. And last year shows they’re not out of their element in this matchup, particularly at home. They had last week off and are nice and dug-in at home, while Air Force got pushed around on Saturday. I just see Air Force running the ball to a slightly-better degree, with that playmaking element on defense surfacing enough to tilt things in the Falcons’ favor, as they leave West Point with the win and cover.

Loot’s Pick to Cover the Point Spread: I’m betting on the Air Force Falcons plus 6.5 points. Bet your Week 10 college football picks for FREE by cashing in on a 50% real cash bonus at an online bookie where they offer the BEST live betting platform on the web, rebates on your action; win, lose or draw and FAST no-hassle payouts! —> Bovada Sportsbook.