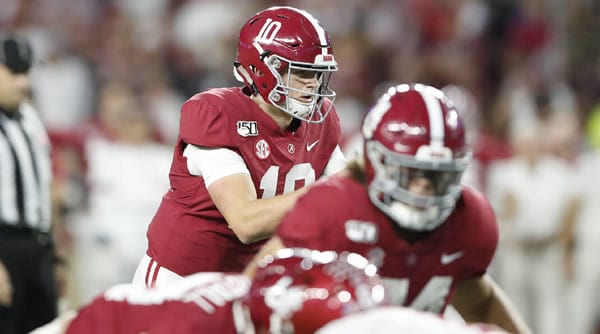 Point Spread: ALA -21/TEN +21 (BAS - 5Dimes has left the U.S. market but you can still bet on games at -105 odds here! Same great wagering platform/offers/reduced vig!)

The 2nd ranked Alabama Crimson Tide passed their biggest test of the season last week by knocking off no. 3 Georgia in a convincing 41-24 victory. Personally, I thought the Bulldogs were live for the upset, but Alabama flexed their muscles on the offensive side of the football behind QB Mac Jones, who completed 24 of 32 passing for 417 yards with four touchdowns against one of the best defenses in the country. Though it’s still early in the season, Alabama’s path to a potential undefeated season looks very reasonable with teams like Tennessee, LSU and Auburn struggling more than anyone would have expected.

While Alabama’s statement win over Georgia sent shockwaves throughout college football, Tennessee made national headlines for all the wrong reasons. The Volunteers were curb-stomped by Kentucky in a 31-7 beatdown in Knoxville last week. The game started with two consecutive pick-sixes from Tennessee quarterback Jarrett Guarantano and it never got much better for Tennessee’s offense. Despite the fact Kentucky and Tennessee have squared off annually since 1944, it was Kentucky’s biggest win over Tennessee since 1935. The Volunteers were actually 6.5 point favorites going into the game but showed serious offensive issues for the 2nd straight week. Now the Volunteers will be 21 point underdogs when they host Alabama on Saturday.

Tennessee looking for answers on offense

If you simply look at final scores, it may appear that the Volunteers meltdown against Kentucky was the only game time the offense struggled this season. However, that is not even close to accurate. The Volunteers compiled just 214 total yards in the loss to Georgia. They even had several questionable moments in the wins over inferior South Carolina and Missouri teams at the start of the season. Luckily for Tennessee, Alabama’s defense is not exactly the prominent group that we expect from a Nick Saban caliber team. The Crimson Tide are giving up 458 yards per game, which is about twice the amount some of Saban’s national championship-caliber teams have allowed. Obviously, Alabama has faced some fierce competition through the first few weeks, but that factor should not be given a free pass either.

The Crimson Tide are not nearly as threatening on the defensive side of the ball compared to recent Alabama teams. Alabama’s primary challenges have been getting pressure on opposing quarterbacks and defending the passing attack where they have allowed 309 yards per game on average. This sets up perfectly for Guarantano to have a bounceback game; however, that does not guarantee it will happen. Personally, I have never been a fan of Guarantano and called him out as a subpar quarterback in the preview against South Carolina. I think there is a bigger likelihood that Alabama gets out ahead and Guarantano continues to make costly mistakes compared to the idea that he will have an outstanding game to keep the Volunteers competitive.

I mentioned earlier that QB Mac Jones had an incredible performance in the victory against Georgia. It was actually the 3rd straight game Alabama’s star quarterback passed for 400 yards or more. The concerning point for Tennessee is that I simply don’t believe they have the personnel to slow the offense down. The trio of receivers Jaylen Waddle, DeVonta Smith, and John Metchie are elite talents that match-up well against Tennessee’s defense. Furthermore, running back Najee Harris remains one of the country’s best backs and has compiled 358 rushing yards with six touchdowns in the last two games alone. I believe Alabama will move the football at will, and the Crimson Tide’s 2nd ranked scoring offense will post another big number on Saturday!

Jay’s Pick to Cover the Point Spread: I was already big on Alabama before this betting line was posted, and Kentucky may have cost us some value. However, the Crimson Tide should dominate this match-up, and I expect them to cruise to an easy victory. Take Alabama -21. Bet your this weekend’s picks for FREE by scoring a 100% real cash bonus on your first deposit of $100 to $300 at one of the web’s best online sportsbooks: MyBookie!