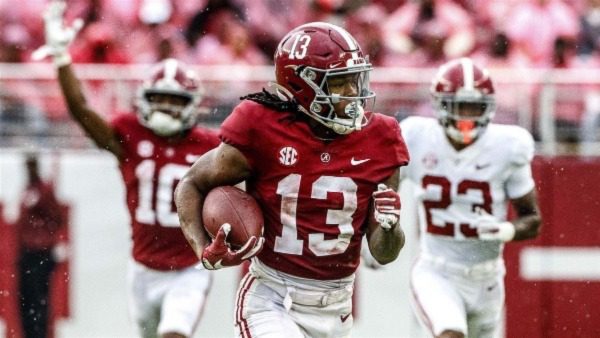 Point Spread: ALA -12/MISS +12 (Make Bama a +8 underdog or Ole Miss a +32 dog by inserting either into a massive 20 point college football teaser at Wagerweb Sportsbook!)

For the 2nd time in 3 games, the Alabama Crimson Tide were upset at the hands of an SEC opponent. Last week’s 32-31 overtime loss to no. 10 LSU may have been the dagger that keeps Alabama out of the College Football Playoffs especially considering the Tigers now control the SEC West. However, Alabama will try to get back on track this Saturday in yet another difficult road trip when they travel to Oxford for a date with Lane Kiffin and the no. 11 Ole Miss Rebels at Vaught-Hemingway Stadium at Hollingsworth Field.

Fresh off a bye week, the Rebels will enter Saturday’s SEC West showdown at 8-1 SU with their lone loss coming against the same LSU team that knocked off the Crimson Tide last week. However, Ole Miss should be refreshed, which helps their extremely fast-tempo offense that is producing 37.4 points (16th in FBS) per game on average. Offensively, Ole Miss should be able to challenge Alabama and keep the pressure on the Crimson Tide’s defense. However, the Rebels’ defensive concerns are the reason Ole Miss will be sizable 12-point underdogs on Saturday. Therefore, Ole Miss will need some help on the defensive side of the football if they are going to snap a six-game losing streak to the Crimson Tide.

In reviewing the match-ups for this Saturday’s high-profile showdown in Oxford, I was slightly surprised to see the Rebels getting 12 points, but I also understand the rationale. The Ole Miss defense continues to be a weak point for Head Coach Lane Kiffin, which we saw in the 45-20 loss to LSU just two outings ago. More importantly, the Rebels have struggled to stop the run, which is about one of the worst features you can possess against Alabama. Despite the high profile nature of QB Bryce Young and the Alabama offense, Nick Saban’s teams are still best when they are able to run the football, and I expect a heavy dose of tailbacks Jahmyr Gibbs who is currently 4th in the SEC in rushing with 771 yards.

If Alabama is able to run the football successfully, it will help the “control the football” narrative and perhaps make things easier for QB Bryce Young to hit some big plays over the top. With that being said, this is still a scary match-up for Alabama. In each of Alabama’s losses this season, they have given up high-scoring totals to dangerous offensive teams. QB Jaxson Dart is playing pretty well despite random moments of bad decisions and inaccuracy. However, this Rebels offense produces a ton of big play potential with RB Quinshon Davis (2nd in SEC with 1,036 rushing yards) and the duo of receivers Jonathan Mingo and Malik Heath. Therefore, if Ole Miss can make some big plays and keep the pace on this Alabama defense, another upset is not out of the realm of possibility.

The betting public has hammered this opening line which was released as high as 14 points at some online sportsbooks. While the line has come down some, I still think this is a favorable match-up for Alabama to bounce back. The Alabama run game and defense will be the difference here. If they get pressure to Jaxson Dart, I like the Crimson Tide’s chance to cover and stick it to the betting public who are chasing last week’s loss.

Jay’s Pick: Take Alabama -12. Rough week last week? Instead of re-depositing at your bookie and receiving NOTHING, consider grabbing one of numerous 100%+ bonuses on our sportsbook bonus promo code page!