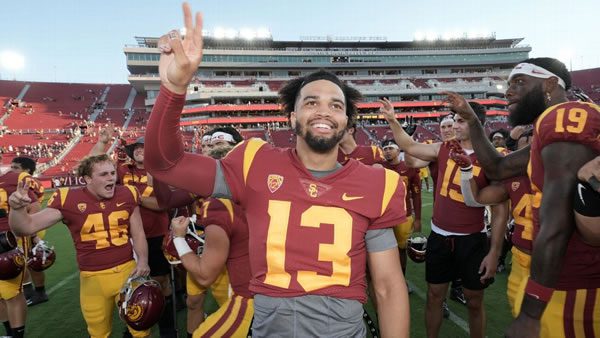 The Arizona State Sun Devils make the trip to LA for a Pac-12 matchup with the unbeaten USC Trojans at the Coliseum on Saturday. On the surface, this seems like an easy one for a rising Trojans team that looks to start making more of a national splash again in college football. Last week, they managed to nose out the Beavers on the road, 17-14. They look for a more-thorough win this week at home against an ASU bunch that got rocked at home last week by the Utes. 34-13. Who can deliver the cover this week?

Why It’s Hard to Get Behind ASU

In these games, it’s hard not to allow the state of the ASU program to resonate in a really bad way. We need to remember that these things have already been accounted for in the spread, but people tend to add even more discredit to a team facing what the Sun Devils are. It’s not just the bad start, where a win over Northern Arizona is their only triumph of the season, but it’s their overall spirits and vibe, which are palpably low. And head coach Herm Edwards getting the axe before last week’s game doesn’t add a lot of confidence.

Their one win of the season was followed by a bad loss to Oklahoma State before they went home for two games, losing badly to Eastern Michigan and then Utah last week. Some of the energy we had started to see the last few seasons have not been amply present this season. But it goes beyond mere presence, energy, and morale. They don’t have any real difference-makers on offense and a line that undermines their whole effort. Last week, seldom was QB Emory Jones not under siege from the Utah front. Add to that a porous defense that can’t come up with any big plays or key stops, and the story starts to write itself a little bit.

After three rollicking wins to open the season where the new Lincoln Riley offense with all his new shiny pieces was cruising, the Trojans ran into some resistance for the first time against Oregon State on the road last week, depending on a late fourth quarter touchdown to nose the Beavers at the wire. Other than a good day on the ground from Travis Dye, we saw a relatively subdued showing from this USC offense. QB Caleb Williams was quiet, as was an aerial package he had been connecting so well with through three games. But catching some resistance on the road against a scrappy Oregon St. team doesn’t mean they won’t resume their dominance at home against an ASU team that seems at least partially on the rocks heading into week 5.

It’s not unreasonable to think that after two sort of underwhelming road wins in their first two conference games that the Trojans would put a little extra into this one just to make a point. In order to get where they’re trying to go, they can’t let lesser opposition hang in there and depend on putting it together at the end when anything can happen. But it’s not unfair to ask whether this USC team is a little overrated with people assuming slapping together all these high-visibility coaching and personnel changes will come off without a hitch. Last week, we saw a little hitch, something to watch as we get into the meat of the season.

Anything you might notice negatively about USC is fine until asking what can the Sun Devils realistically do about it? They still have a leaky defense that could yield a big day to Dye on the ground. And after an uneven showing last week, Williams will be looking to reconnect with another transfer in Jordan Addison, who has stepped up as Southern Cal’s leading receiver. Coming off a bad showing, this USC offense has a chance to shine at home against a defense that has shown it might not be in its wheelhouse against the more competent offenses they face.

Another bad sign for the Sun Devils is that last week when the Trojans struggled to maintain drives, the defense still held firm. A problem area for the last several seasons, we’ve seen better for the last few weeks, holding a dangerous Fresno team to 17 points before holding the Beavers to 14 points last week. If not for the four picks this USC defense was able to secure; there’s no telling how things might have ended up. Then again, conference teams can find some comfort in the fact that USC got four picks and still needed late-game drama to steer things in their direction. Again, it’s a dicey proposition that ASU can duplicate on the road what Oregon St. did at home last week.

The things that would cause a person to question USC might be correct, but I’m not sure this is the right spot in which to exploit that perception. Sure, USC might be overrated, as their massive talent on offense is less-than-automatic and maybe not as high-powered as some had assumed. But I think that’s something that could possibly surface in a more ideal spot than this if looking to take a stance against Southern Cal. Simply put, I’m unsure that ASU can do anything about it even if the Trojans hit a funk or aren’t as good as they looked in their first three games. I’ll take the Trojans in this one.

Loot’s Pick to Cover the Point Spread: I’m betting on the USC Trojans minus 26 points. Bet your Week 5 college football picks for FREE by scoring a 100% real cash bonus up to $300 when you use bonus code PREDICT100 at MyBookie Sportsbook!