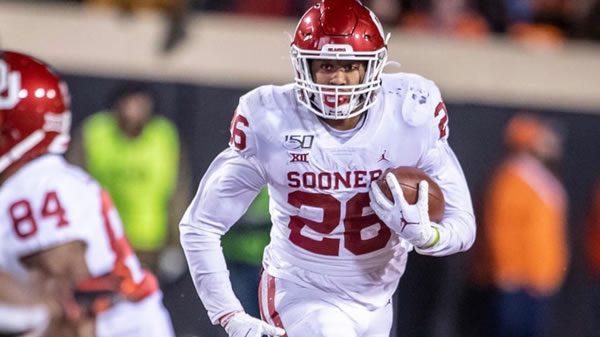 Revenge might be on the menu in Manhattan, as Oklahoma tries to solve the team that has been the biggest thorn in its side over the past two seasons. The Sooners have had their problems with Iowa State, but the Cyclones have been a national contender over the past few seasons and were expected to be a tough out. Not so with the Wildcats, who have pulled out two shock wins from nowhere over the Sooners in the past three seasons to ruin a pair of regular seasons for Oklahoma.

Historically, Manhattan has been a place Oklahoma has gone to get healthy, as the Sooners have won seven of their past eight visits to the Little Apple and have won 10 of 14 overall against K-State. But the Wildcats seem to believe that Oklahoma has no idea how to stop them when they’ve got the football, a marked difference from past K-State teams getting stuffed whenever they faced Oklahoma’s defense. In the past two seasons, K-State has hung 86 points on Oklahoma, and if the Wildcats have another big day on offense, they could absolutely deal some misery to Norman, Okla., for the third year in a row.

How the Public is Betting the Oklahoma/Kansas State Game

The public and the sharps haven’t forgotten the past two seasons and are using that information to treat Oklahoma with caution. Only 45 percent of tickets have come in on the Sooners, and the money hasn’t moved the spread or totals one inch since the game went on the board.

The hard reality is that Oklahoma has played one good half of football against FBS competition throughout this season. The Sooners looked great against Tulane for a half, but after that, they have looked very mortal. Part of the problem has been the ground game. Oklahoma almost ground to a halt against West Virginia, relying too much on Spencer Rattler to get the job done with his arm when the Mountaineers shut down Eric Gray and Kennedy Brooks.
And that could be a problem against Kansas State because the Wildcats were able to force Rattler into several mistakes in the second half last year, which allowed them to completely swing the game’s momentum away from the Sooners. Rattler’s decision-making has improved somewhat, but it’s not to the point where the Sooners can realistically hope to win. If not for the Sooner defense doing the job on West Virginia, Oklahoma would have lost that one.

When Kansas State Has the Ball

The Wildcats have one ginormous question in their backfield: who is going to be throwing the ball? Actually, that question leads to its own follow-up question: will they even be throwing the ball all that much? With Chris Kleiman willing to confirm that Thompson is on the sidelines, Kansas State is quickly running out of bodies. Will Howard has been below average at quarterback, and Jaren Lewis hasn’t yet shown he is ready for this level.

So Jaren Lewis might well get the start, and it appears he’s going to have to try to beat Oklahoma without a running game. Kansas State did nothing on the ground against Oklahoma State outside of Howard breaking a 37-yard run. Other than that, the Wildcats averaged around one yard per carry, which puts a lot of pressure on a passing attack that has been chiefly pedestrian. Lewis did a better job with the pass against the Cowboys than Howard did, but the offense still wasn’t moving all that well after the first quarter.

Oklahoma has typically been a great bet as a favorite, but the Sooners are now only 7-3 in their past 10 ATS after losing three straight ATS against FBS competition. Oklahoma hasn’t had an issue against Big 12 opponents, having covered the number in six of their past nine conference games, but their league opener against West Virginia was another step in the wrong direction.
K-State has been an excellent bet at home, however, as the Wildcats have gone 9-3 ATS in their past 12 games as a home underdog. The Wildcats haven’t been that great against teams above .500, only covering the number once in their past five, but that was also because several of those games were on the road against good teams.
In this series specifically, points have been the way to go. The past six meetings in Manhattan have gone over the number, and that’s been good for the home team, which is 4-1 ATS in the past five matchups.

Look for lousy weather in Manhattan for this game. It’s supposed to be a storm-filled contest, with up to a quarter-inch of rain on a 75-degree day in central Kansas. Wind won’t be a factor at four miles per hour, but that’s the only good thing.

Oklahoma just is not playing well right now, and things are not likely to get better against a team that knows how to play them tough. The Sooners should still come out ahead this year, but 10.5 might be a bit too much to cover here.
I like the under in this game with both offenses struggling, but for the game, I’ll take K-State and the points. Bet your Week 5 college football picks for FREE by taking advantage of a 100% REAL CASH bonus on your first deposit of $100 to $1000 at Betnow!