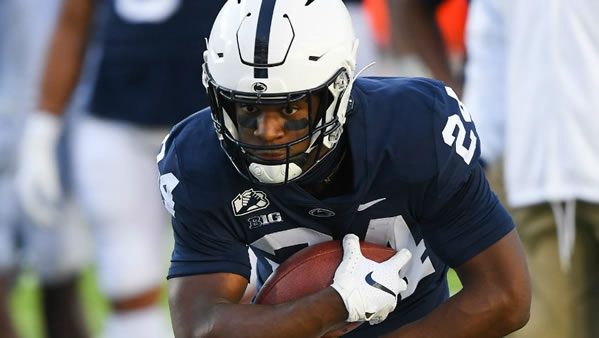 Following a late stumble at Iowa two weeks ago and a week off to stew, Penn State’s Nittany Lions return to action Saturday afternoon against Illinois at Happy Valley. Penn State looked like it would reach 6-0 on the season but gave away a game to the Hawkeyes. Now the Lions try to return to their winning ways, albeit perhaps without their starting quarterback.

Penn State’s favored by more than three touchdowns for this game. Which way are we going here with our free college football betting pick?

This week’s college football betting lines opened the Lions at -24 over the Illini, with an over/under of right around 45. Early betting action then dipped that spread to -23.5 and bumped that total to 46.5.

The Fighting Illini, in their first season under Coach Bielema, are 2-5 after getting blanked at home by Wisconsin two weeks ago 24-0. Illinois then had last week off.

The Illini only trailed the Badgers 10-0 at the half but gave up a Wisconsin touchdown on the opening drive of the second half and faded from there, also coming up short ATS as a 12-point dog.

The Illini didn’t even move the ball into Wisconsin territory until midway through the fourth quarter.

Illinois has now been out-gained by each of its five Power 5 opponents this season, although it’s out-rushed three of those five P-5 foes.

At 2-5 overall and 1-3 in Big Ten play, the Illini are just trying working toward a brighter future.

The Nittany Lions, meanwhile, are 5-1 on the season after falling at Iowa two weeks ago 23-20. They then also had last week off.

Penn State gave up an early field goal to the Hawkeyes, then scored the next 17 points of the game and led 17-10 at the half. But the Lions lost quarterback Sean Clifford to an injury along the way. Penn State then scored the first three points out of the locker room to go up ten but let Iowa rally with 13 straight points to fall behind and came up empty from there, taking its first loss of the season.

The Lions got out-gained by the Hawkeyes 305-287, managing just 50 yards of offense after Clifford left the game in the second quarter. Penn State also lost time of possession by a 36:24 split and the turnover battle 4-1.

As of this writing, Clifford is listed as questionable for Saturday.

At 2-1 in conference play, Penn State trails 4-0 Michigan State by a game and a half for the top spot in the Big Ten East, with games against Ohio State and Michigan coming up before a season finale at East Lansing.

The Nittany Lions are 6-1 SU, 4-3 ATS over their last seven meetings with the Illini. They’ve also won the previous three meetings by an average score of 53-15. Last year’s meeting was actually tied at 21-21 after one quarter before Penn State scored the final 35 points of the game for the victory and the cover at -16.

Also, that game played way over a total of 54.

So far this season, teams ranked in the Coaches Top 25 are 94-21 SU but only 55-57 ATS against unranked opponents.

Unders are 5-1-1 in Illini games this season, which are averaging 42 total points.

Unders are 4-2 in Lions games this season, which are also averaging 42 points.

Penn State is going to win this game; it’s just a matter of by how much. Both teams are hurting at the QB spot, which means this game will probably be dominated by defense. And in a low-scoring game, 23 points can be massive. Illinois ain’t pretty to watch, but it can run the ball a bit, and if it avoids the turnovers, it could keep this one close. We’re not calling for the upset here, but we are taking the Illini and the points. Did you know… Most sportsbooks that offer live betting only post lines during commercials? At Bovada Sportsbook, the line is betable almost 100% of the time! Click here to check them out! They’re AWESOME!