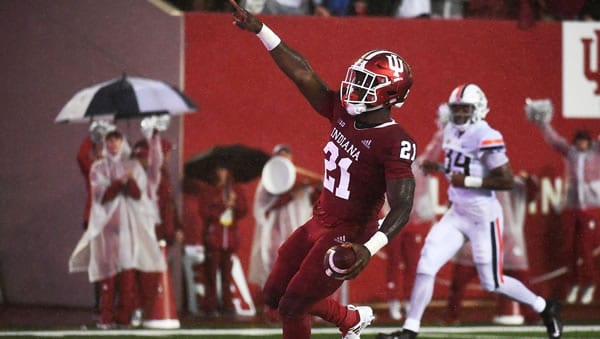 The Penn State Nittany Lions begin what they hope is a trip to the Big Ten championship game. At the same time, the Indiana Hoosiers harbor some high hopes, too, heading into the season opener for both teams Saturday afternoon in Bloomington. Penn State owns a six-game winning streak in the series with Indiana, but the last two meetings played close. How are we playing this game with our free college football pick?

College football betting odds opened Penn State at -7.5 for this one, with an over/under of right around 57. Early betting action then dipped that spread just under the magic number, to -6.5, and bumped that total to 58.5.

In its seventh season under Coach Franklin, Penn State returns 12 starters this season from a team that played 11-2 SU, 7-6 ATS last season. The Lions only two losses last year came at a pretty good Minnesota and at eventual College Football Playoff qualifier Ohio State, and they beat a pretty good Memphis team in the Cotton Bowl 53-39.

Seven starters return on offense for PSU, including QB Sean Clifford (23/7 TD/INT last season) and four along the offensive line. But last year’s leading rusher, Journey Brown, is out with an undisclosed medical situation, and they lost leading receiver KJ Hamler to the pros. Meanwhile, only five starters are back on defense.

The Lions averaged 36 points and 412 yards per game last year while holding opponents to 16 and 336.
We expect that offense to equal that production this season, but the defense, while still solid, will have a hard time hitting those numbers again.

Penn State is playing against a wins over/under of 7.5 this season, which consists of a nine-game Big Ten conference schedule.

Indiana is playing against a wins O/U of 5.5 this season.

Penn State, as mentioned above, owns a six-game winning streak over Indiana, going 3-2-1 ATS along the way. Last year the Nittany Lions trailed the Hoosiers 14-10 early, then used a 17-0 run spanning the halves to lead 27-14. Penn State allowed Indiana to get within 27-24 with 10 minutes to go, hung on for the victory but couldn’t cover as a 15-point favorite.

Two seasons ago, the Lions trailed the Hoosiers 21-20 late into the third quarter, rallied to win 33-28 but couldn’t cover at -14.

Penn State might still be the better team in this match-up, but Indiana’s kept the last couple of meetings close. The Hoosiers are 0-9 SU against the Big Three of the Big Ten East (Ohio State, Penn State, Michigan) over the last three seasons but 5-4 ATS. To take the next step toward contending just for second place in the East Indiana needs a couple of scalps, and this is a chance at one. We’ll take the Hoosiers plus the points. Bet your Week 8 college football picks for free by scoring a huge 100% real cash bonus on your first deposit of $100 to $300 at MyBookie!