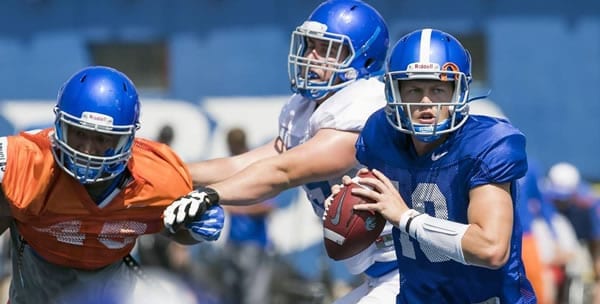 The Boise State Broncos come to TIAA Stadium in Jacksonville to take on the Florida State Seminoles in their opening week of the college football season. Boise State faces a long and daunting road trip in Florida, well out of their wheelhouse in the Mountain West Conference. This game is a de facto home game of sorts for the ‘Noles, only a few hours by bus to the stadium from Tallahassee. And after an uncharacteristically-down 5-7 season in head coach Willie Taggart’s first season at the helm, they look to turn it around with a big week one win. After just four covers in 2019, FSU’s backers also hope for better this season. It won’t be easy against a team that has scored its share of high-profile wins over the years. The Broncos are coming off a ten-win season and would like to make a splash in week one.

Challenges Facing Each Team in 2019

Already in his 6th season as Broncos head coach, Bryan Harsin faces some challenges in keeping his team on-point this season, but the talent always seems to regenerate in Boise. The same schemes are in place, along with a staff that always seems to dial in the right answers. Granted, the offense, in particular, has a lot of questions to answer. And while there are some voids on defense, they get 10 of their top 13 tacklers back from last season. And it was a pretty good defense, even excellent in stretches. Can they duplicate that far from home against a talented FSU offense that could be better this season? And with all the new faces on offense, will Boise State be able to handle what is, in fact, a pretty tough Seminoles defense? Most of the heavy-hitters from last year’s squad are back, featuring a secondary that might be one of the best ones in their conference. That’s a lot to deal with for a new quarterback working with a lot of young personnel.

Offense and Finding a New Quarterback

Each team has late-developing quarterback situations, with the starter’s identity coming down to the wire. Florida State’s Deondre Francois is gone, but at least they have some experience waiting in the wings, with James Blackman and Wisconsin transfer Alex Hornibrook looking to step in. Last season, the Seminoles scored 14 or fewer points in five games. They should see better results this season. Running back Cam Akers has the chance to take a big step forward after a promising 2018 season. His main issue is the work being done up-front, and for the last few seasons, it just hasn’t been there for FSU. Three starters are gone, and it might be another sticking point this season. Last season, we saw talent on offense handcuffed by the lack of holes being opened up-front. Nyquan Murray is the most productive returning ball-catcher, with rising Tamorrion Terry looking to improve on the home run hitting ability he showed last season.

Though Chase Cord is expected to be named the Boise State starting QB, nothing was official as of press time. Unlike FSU, Boise’s choices at the position all lack real experience. That can be said across different areas, as exited Alexander Mattison’s production will likely be replaced by more of a committee at running back. Some inexperience at receiver also doesn’t paint Boise’s chances in a good light, facing a Seminoles secondary that could be the strength of the team. It’s fair to say that there is more optimism surrounding the defenses of both teams, as opposed to their respective offenses.

Then again, that perspective would appear to have little faith for a Boise State program that usually produces different stars on offense. Not every QB since Kellen Moore took them to a big bowl win has been stellar, but they’re usually pretty good. And at running back and receiver, talent always seems to surface. Procuring top talent hasn’t been an issue in recent seasons for the Broncos, so why would it be this season? Make no mistake, however, that for an offense that still needs to work out a lot of stuff, a long road-trip to face what could be a special FSU defense is a daunting task.

Some things paint this out to be a favorable spot for Boise State, however. True, they are far removed from their stomping grounds, and the Boise State highlights this far in the southeast are scant indeed. But you’re getting a team that won twice as many games as its opponent last season, actually getting five points. Taggart is sited as being the man who will get this on the right track, but year one suggested that might not be a total certainty. Boise certainly lost steam on both sides of the ball, as they work in a new quarterback and other key pieces team-wide. But their defense should be able to compete well with an FSU offense that was really flat last season, without a ton of reasons to expect a total about-face in 2019.

Coming up with the Best Move

I see both teams seeing their offenses getting better as the season carries on, but neither team would appear to be in a great spot to hit the ground running on that side of the ball. Each team might end up having the best defenses in their respective divisions. And with the weather in Florida still being hot and muggy, there might be a little sag from both teams late. I think that sets up favorably for a game where points won’t be all that easy to come by. Though I also tend to like Boise getting five points, I’m going to settle on the “under.”

I’m betting that the Boise State vs. Florida State game goes under 53.5 points and betting this at a reduced juice sportsbook