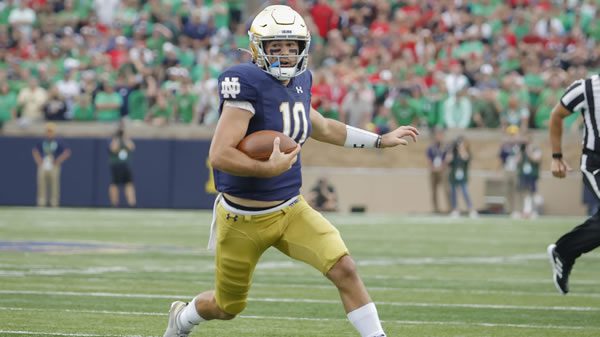 The California Golden Bears head east to South Bend to take on the Notre Dame Fighting Irish in a Saturday afternoon battle of teams that have started the season with opposite records. This game will be the fifth all-time meeting between the two, with the Irish holding a 4-0 record against the Bears, though in terms of trends, this doesn’t really mean too much considering all four games took place between 1959 and 1967.

Notre Dame will be looking to right the ship after a disastrous 26-21 home loss to Marshall that not only ended a 43-game winning streak against unranked opponents but, much more importantly, effectively killed their season and any chance they had of getting into the BCS Playoffs. With the loss, Marcus Freeman became the first Notre Dame head coach to start his tenure with an 0-3 record and now desperately needs to find a way to reverse his team’s downward spiraling momentum.

Even though it was only two weeks into the season, it was certainly beginning to look like naming Tyler Buchner as the starting quarterback was a giant mistake. He was able to succeed last season as a change of pace to then-starter Jack Coan, but as a full-time quarterback, his lack of passing ability become glaringly obvious. With Buchner now out for four months due to a shoulder injury suffered against Marshall, second-stringer Drew Pyne will step into the starting role. Pyne was able to find success against some tough defenses last season and will make his case for a permanent role against the Bears on Saturday with Buchner mercifully unavailable to go and true freshman Steve Angeli promoted to second string.

Pyne will be looking to improve on the Irish paltry passing game and will likely do so, leaning on heavily on his team’s main options through the air, tight end Michael Mayer and wide receiver Lorenzo Styles. Mayer is one of the best at his position in college football and is not only the team leader in receptions with 13 but also the sole player to catch a touchdown pass this season for the Irish. Styles is coming off a seven-reception performance against Marshall and is the only receiver on the team that has more than two receptions so far this year. The Irish clearly need another option in the passing game if they want to make things any easier for Pyne. Especially with two of the Bears’ best lurking in the defensive backfield in safety, Daniel Scotty and cornerback Lu-Magia Hearns.

Another way to relieve some of the pressure on Pyne is for Notre Dame to find any sort of consistency in their running game. Currently ranked 114th in the country in yards per game, the Irish backfield has struggled through its initial two weeks with a meager 3.1 yards per carry average and just one touchdown from a running back. Their main obstacle on Saturday will be the leader of the Cal defense in, linebacker Jackson Simon. However, things will at least be a bit easier than initially expected after the Bears lost defensive lineman Brett Johnson to injury for the second straight season in late August. Audric Estime has gotten the most carries so far for Notre Dame and is only one at his position to score a touchdown so far, but speedster Chris Tyree could get more of an extended look if Estime can’t find a way to improve on a yards per carry average than is under three yards.

After two consecutive losing seasons that saw the Bears go just 6-10 against FBS competition, Cal is now 2-0 to start their 2022 campaign. The quality of competition hasn’t necessarily been elite (UC Davis and UNLV), but head coach Justin Wilcox will gladly take any sort of positivity as the Bears head to South Bend before opening up their Pac-12 schedule. With the lesser tier conference foes awaiting California to start, Wilcox’s team has a chance to build up some serious momentum before they hit the crux of their schedule.

PLUMMER GETS A CRACK

Purdue transfer Jack Plummer (no relation to Jake) won the quarterback competition in the offseason and has been steady thus far for the Bears, completing 69% of his passes while throwing for four touchdowns and averaging 275 yards per game. Plummer has struggled in the past with turnovers, though; he threw 20 interceptions compared to 26 touchdowns at Purdue and will be going up against an Irish defense that is hungry and desperate for an interception or fumble, considering they are one of just four remaining FBS teams not to have caused a turnover through the first two weeks of the season.

There was some concern that the cupboard would be a bit bare for Cal at wide receiver when they lost six of their top seven in receptions from a season ago, but three wideouts have opened as the clear top tools for Plummer in the passing game, Junior Jeremiah Hunter and redshirt freshman Mavin Anderson and J. Michael Sturdivant. The experienced Hunter is the team leader in receptions and yards, while both Andreson and Struvidant have already made an impact, with the former getting into the endzone as well and the latter putting up double-digit receptions and over 100 yards receiving.

The focal point of the Cal offense and star in the making is running back Jaydn Ott. The freshman has already rushed for 156 yards and a touchdown while catching five passes and posting an additional two scores through the air. Ott now gets to look forward to a Notre Dame run defense that ranks 114thin the country and got absolutely torched by Khalan Laborn of Marshall for 163 yards a week ago. The Bears will likely attempt to control the clock against the Irish by limiting their possessions, which means that how successful Ott can be will likely be one of the biggest determining factors of the games’ outcome.

Justin Wilcox has led his Cal Bears on an impressive run as an away underdog, posting a 13-1 record against in the spread in their last 14, getting points on the road. They have also gone an equally impressive 12-1 versus the number in their previous 13 matchups as an underdog of 7 points or more, five of which they won outright. With all that and the fact that Notre Dame has looked beyond out of sorts through the first two weeks of the season may have some backing the Bears on Saturday, but I will be investing in the Irish. Notre Dame may not have been worthy of a fifth in the country preseason ranking, but they still clearly have ample talent on both sides of the ball and have played far below their capabilities thus far. I believe a change at the quarterback position will be the spark the Irish need, and you can expect Drew Pyne to lead the Irish to a much-needed win and cover at home against Cal on Saturday in South Bend.

Are you laying -110 odds every time you place a football bet? If so, you’re overpaying! How could you not care that could be only having to lay -105? Betting at the best price is just as important as picking winners and getting the best line! Stop overpaying! Make the switch to BetAnySports Sportsbook TODAY!