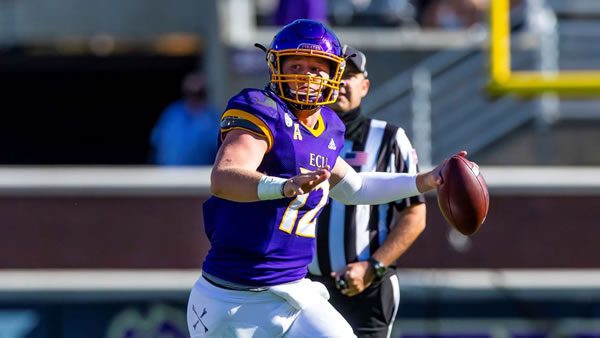 Point Spread: CIN -14/ECU +14 (MyBookie - Boost your bankroll this weekend and bet your Turkey Week picks for FREE by taking advantage of a 100% bonus up to $300! Just use bonus code PREDICT100 and they’ll double your deposit! This is a REAL cash bonus; not a match play!)

Cincinnati finally looked the part of a top team last week against SMU, as the Bearcats boatraced the Mustangs to clinch their spot in the American title game. Prior to that, Cincinnati had been barely escaping each week, slowly seeing their stature as an undefeated team wither away as they failed to impress with wins over weak teams. That finally changed last week when Cincinnati hammered SMU, showing just how dangerous they can be when they are clicking on all cylinders.

On the East Carolina side of this equation, the Pirates have nothing to lose. They know they’re going to play in a bowl and they’re coming in having won four straight games to earn third place in the conference. The Pirates can’t make the conference title game, as they’re a full two games back of both Houston and Cincinnati. But East Carolina is going to its first bowl game in seven years, and the Pirates have gotten better every week. With Cincinnati having struggled through multiple games over the past month, East Carolina could be thinking upset.

How the Public is Betting the Cincinnati/East Carolina Game

The public hasn’t turned on the Bearcats after Cincinnati’s played multiple close games; they’ve put 63 percent of tickets on Cincinnati and caused the spread to tick up half a point from -13.5 to -14. The total has stayed frozen at 58.

The Bearcats can attack through either the air or ground, depending on what the best cours of action is for the situation. Whether it’s Desmond Ridder’s arm or Jerome Ford’s legs, the Bearcats have dominated opponent after opponent with their offense and made themselves into an almost unstoppable attack when everything is operating the way it should

The question is whether things will be working the way they should, because Cincinnati has been off for much of the past month. The Bearcats have seemed to feel the pressure that comes with being the first Group of 5 team to be in position to make the playoff, as they’ve struggled to score against lesser opponents. Against Tulane, Tulsa and Navy, who have a combined record of 10-22, Cincinnati didn’t break 31 points, and the Bearcats have struggled against an Indiana squad that proved to be nowhere near bowl competition this season. On paper, Cincinnati is an outstanding team, but this team is mentally inconsistent, as it seems to rise to a higher level against strong teams while dropping to the level of lesser squads. East Carolina seems to be the type of team that can challenge the Bearcats and bring out the best in them, but there’s no way to know for sure.

When East Carolina Has the Ball

The scary thing about East Carolina is that the Pirates are still a year away from being where they want to be as far as contending in the American. Holton Ahlers is only a junior thanks to the free COVID year, and he’s been getting better every week, torching Navy for 405 yards a week ago. The Pirates have sometimes asked him to do too much, which could be a real problem against Cincinnati’s excellent pass defense, but if he’s slinging the ball around with confidence, East Carolina is tough to stop.

That’s before you add in Keaton Mitchell, who is a second-year freshman who’s already over 1,000 yards and is set to hit double figures in touchdowns. The Pirates have looked more comfortable each week ever since their comeback win over Marshall, and if not for an overtime loss at Houston, East Carolina would be playing for a spot in the American title game. Underestimate this team at your peril; the Pirates have covered in six of seven league games this season, in large part because they know how to move the ball through the air.

Greenville is not a friendly place for Cincinnati, as the Bearcats have failed to cover the spread in three straight visits to East Carolina. In fact, the home team is 5-0 in the past five meetings, and the over has been the play in each of the past four. The Pirates have only managed to win once when the Bearcats come to Greenville, but they’ve been competitive every time, as their three losses to Cincinnati at home as American members were all decided by five points or less.

When East Carolina does play good teams, there tends to be a lot of points scored. The Pirates have seen the over hit in nine of their past 11 against a team above .500.

The earlier this game ends, the better. The day in Greenville will be quite pleasant, with temperatures getting into the mid to high 50s. The evening will be decidedly less comfortable, as temperatures are set to drop to around 25 degrees, so if this game gets over with by 6:30, it’ll be a lot more enjoyable for all.

East Carolina has absolutely nothing to lose, and Cincinnati really hasn’t played well in this stadium in past years. The Pirates are rolling right now, and even though the difficulty spikes quite a bit here, East Carolina has been competitive throughout the season. I think I might buy a point to get on the other side of the key number of 14 and sacrifice a small bit of my payout to get a better shot at a win, but the Pirates are the side I want here. East Carolina plus 14.5 seems the right play to me. Question: Did you know that you could be placing your bets at -105 odds instead of -110? Take a minute to do the math and see how much you’d have saved over the past year if you had bet at the lesser odds! The figure is undoubtedly staggering! Quit wasting money and start saving money TODAY by betting at reduced odds -105 BetAnySports! 10+ years advertising them with ZERO complaints!