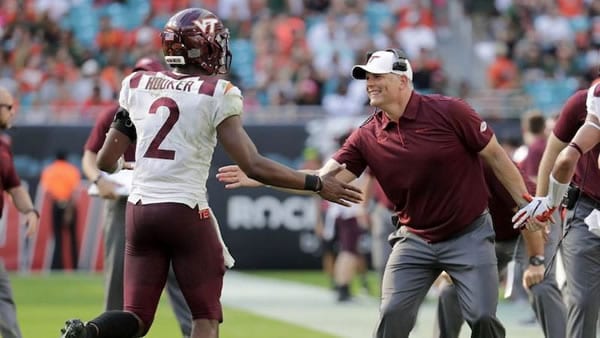 The Clemson Tigers shoot to clinch a berth in the upcoming ACC championship game, while the Virginia Tech Hokies hope for an upset that might keep their bowl hopes alive when the teams meet Saturday night in Blacksburg. Clemson also remains a candidate to make the College Football Playoff, and as such, is favored by more than three touchdowns for this game. Can the Tigers cover the big number? Or do the Hokies have a money-making effort in them? And who do we like for our free college football pick?

College football betting odds opened Clemson at around -22.5 over V-Tech, with an over/under of 67. Both those numbers were holding steady in the early betting action.

The Tigers just played their first game in three weeks last Saturday, pounding Pittsburgh 52-17. Clemson turned three early takeaways into three touchdowns, led 31-0 after one quarter and 38-10 at the half. The Tigers allowed the Panthers to get within 38-17 early in the third quarter but tacked on two scores from there to secure the win and the cover as 24-point favorites.

Clemson out-gained Pitt 581-246, held the Panthers to just 16 yards on the ground, and won the turnover battle 5-1, creating a +21 points differential.

The Tigers have now out-gained eight of their nine opponents this season, five of them by 200 yards or more.

Clemson started 7-0 this season, rolling almost everyone they encountered, then lost at Notre Dame 47-40 in double-overtime without starting quarterback Trevor Lawrence. The Tigers then had a week off, then had a game canceled. Lawrence returned to action last week and threw for 403 yards and two touchdowns.

At 7-1 in conference play, Clemson sits in second place in the ACC, one game behind first-place Notre Dame and one game ahead of third-place Miami. And second place makes the ACC championship game this season. Also, at 8-1 overall, the Tigers are still very much in the running for another invitation to the College Football Playoff.

Meanwhile, Virginia Tech lugs a three-game losing skid into this one after falling at Pitt two weeks ago, 47-14. The Hokies then had last week off.

V-Tech gave up the first nine points of the game against the Panthers, pulled to within 9-7, then trailed 23-14 at the half. But the Hokies came up completely empty in the second half, lost big, and whiffed ATS as 6.5-point dogs.

Virginia Tech produced 434 yards of offense against Pitt but gave up an alarming 556. The Hokies also lost time of possession by a 36:24 split.

Virginia Tech has now been out-gained each of its last four games.

So after starting 4-2 this season, Virginia Tech sits at 4-5, with its 27-season bowl streak in dire jeopardy.

These teams have played three common opponents so far this season; Clemson is 3-0 SU, 1-2 ATS against Pitt, Wake Forest, and Boston College, while V-Tech is 1-2 both SU and ATS vs. the Panthers, Demon Deacons, and Eagles.

The Tigers own a five-game winning streak over the Hokies stretching back to 2011, including a pair of ACC championship game victories, going 4-1 ATS along the way. Most recently, three seasons ago, Clemson beat Virginia Tech 31-17 and covered at -7.

Overs are 6-3 in Clemson games this season, which are averaging 65 total points against an average over/under of 59.

Overs are also 6-3 in Virginia Tech games this season, which are averaging 66 points against an average O/U of 62.

The Under is 4-1 over the last five meetings between these teams.

Six of Clemson’s eight wins this season have come by at least 24 points. Also, playing on the road means the spread is a bit more amenable toward the Tigers. And while Clemson just got its All-World starting QB back, Virginia Tech is struggling at that position and on defense. We’re giving the points here with the Tigers. Note: It’s time to stop being foolish by betting on games at -110 and start betting on games at -105. Making the switch to reduced odds betting will save you THOUSANDS of dollars! Who wouldn’t want that? Find this amazing money-saving offer at BetAnySports! Home of -105 odds!