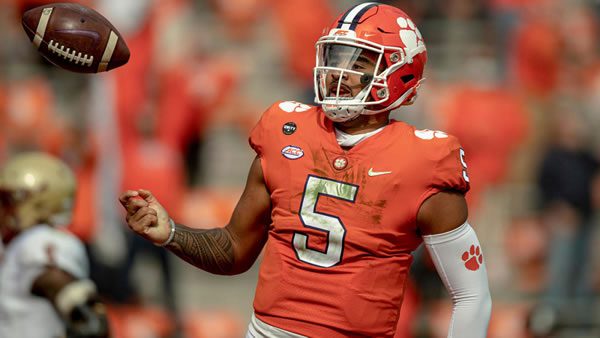 If Clemson is going to get back on track this season and return to the ACC championship game, it has to start here. This was the game where we first saw that Clemson really wasn’t going to be Clemson in 2021, as the Tigers could only best Georgia Tech by a 14-8 final score. If the offenses aren’t fixed, Clemson might be able to do well in ACC play, but it’s not going to get much done beyond the league schedule. Only three times last season — South Carolina State, Wake Forest, and Connecticut — did Clemson manage to top 30 points. Georgia Tech would be thrilled with that kind of performance after the Yellow Jackers have been simply shredded under Geoff Collins. Everyone knew that going from the triple option of Paul Johnson to Collins’ spread offense would result in a long, painful rebuild, but nobody figured that Collins’ arrival would also dismantle the defense. Georgia Tech has slowly become decent at throwing the football, but now the Yellow Jackets can’t stop anybody. After giving up what was their worst showing in 30 years in 2019 by averaging 32.4 points conceded per game, Tech has somehow gotten even worse, giving up 36.8 points per game in 2020 with nine returning starters and 33.5 points per game last year with ten returning starters. And now experience goes out the window for the Yellow Jackets’ defense — only three starters are back from last season.

How the Public is Betting the Clemson/Georgia Tech Game

If you spent any time betting on Clemson last season, the name D.J. Uiagalelei might be a swear word in your home. Uiagalelei simply wasn’t good at all last season, tossing ten interceptions against just nine touchdown passes. If it weren’t for a decent ground game led by Will Shipley and Kobe Pace, the Tigers would have been a lot worse than 10-3 in 2021. Things could get worse before they get better for Uiagalelei, because he’s now missing his top wide receiver from last year in, Justyn Ross. With Beaux Collins hampered, the best returner who’s healthy is Joseph Ngata, which could make it challenging for the Clemson pass attack to get on the same page. A lot will depend on if Shipley can get going, but Georgia Tech has been fairly consistent against the run during Collins’ time in Atlanta. The best way to beat the Yellow Jackets has been through the air, which Clemson and Uiagalelei have not shown they can do ever since Trevor Lawrence traded in his orange and purple for the Jacksonville Jaguars’ teal and black.

The good news is that Jeff Sims returns. The bad news is that not many pieces come back with him. The Yellow Jackets had to score a lot of points to succeed last year because of poor defense, but now the Jackets are down three of their best four receivers from a season ago, making for a very difficult situation for any quarterback. To his credit, Sims doesn’t seem that turnover prone, although the Yellow Jackets did finish minus-2 in turnovers because the defense just couldn’t intercept passes, grabbing a grand total of three for the season. Sims and Malachi Carter should make for a reasonable combination, but beyond that, Dylan McDuffie is going to have to build on the numbers he showed at Buffalo. The Yellow Jackets are clearly trying to rebuild with Collins’ seat getting very warm in his fourth year in Atlanta; that’s far from an ideal combination.

Betting these teams was nothing short of a fool’s errand in 2021, as they combined to go 9-16 ATS (8-15 ATS if you don’t count the game against each other). That cover was the only one in the past seven that Tech has had against Clemson, as the Jackets are 1-5-1 ATS since their most recent win over the Tigers. Granted, Tech comes into this on a six-game skid and has just one cover in its past eight contests, so it’s not like the Jackets have been succeeding against anyone as of late. On the Clemson side of the ledger, things have been just as horrid in September: the Tigers have failed to cover in seven straight contests in the season’s first full month. The Tigers also don’t give up a lot of points in September: 20 of their past 26 games in September have played to the under.

With the game moved from the Yellow Jackets’ outdoor home of Bobby Dodd Stadium to the Falcons’ indoor facility, the weather won’t play a role.

This is a lot of points with a Clemson offense that showed next to nothing in 2021, but Georgia Tech simply cannot be trusted. This looks like it could be a defensive pillow fight, as I don’t think the Jackets’ weapons can do much of anything against the Clemson defense. On the other side of the ball, I have zero trust in Clemson, but I also have zero trust in a Tech defense that has just three starters back. If I have to make a spread play, I’ll take the Tigers, but I think the right play here is the Under.