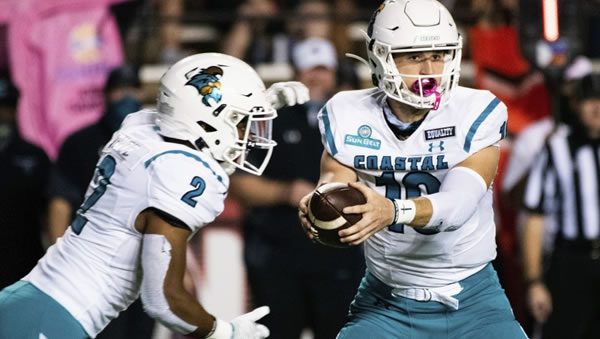 Unless Appalachian State can bounce back in a big way after a rout at the hands of Louisiana, the Sun Belt East title race might be over before it starts. Coastal Carolina appears to be every bit as good as it was a season ago, as the Chanticleers are off to a 6-0 start and have barely been scratched this season.
Granted, Coastal has played an incredibly weak schedule to this point, as the best team they’ve faced to date has probably been Buffalo, the one game in which the Chanticleers failed to cover this season. Coastal has looked outstanding against Sun Belt opposition, outscoring Arkansas State and Louisiana-Monroe by a combined 111-26, but those are arguably the two weakest teams in the conference.

Appalachian State, on the other hand, came up against the best the West has to offer and was no match for the Ragin’ Cajuns, turning the ball over multiple times in a 28-point loss that was never competitive. The Mountaineers are surely better than what they showed a week ago in Lafayette, but if they can’t stop turning the ball over, it’s hard to see them doing much better than they did a week ago.

How the Public is Betting the Coastal Carolina/Appalachian State Game

The public appears to be very much on the side of the Chanticleers, as 78 percent of all tickets have come in on Coastal. However, early money is coming in on App State, as the number has fallen from -3.5 to -3. The total has ticked up from 59 to 59.5, as bettors are expecting a lot of points in what has traditionally been a high-scoring matchup.

Appalachian State:
Running back, Daetrich Harrington (undisclosed) is out indefinitely.

You’re not supposed to be as accurate as Grayson McCall is with the football. A good completion percentage is around 60 to 70 percent, but McCall is completing an incredible 79.8 percent of his passes and has thrown just one interception all season long.
However, the big question is whether McCall’s accuracy is because Coastal has been steamrolling through a soft schedule. Buffalo is the Chanticleers’ best win of the campaign, and the Bulls were unimpressive in surviving against Ohio.
However, Louisiana just showed that there might not be anything that App State can do about the Chanticleer passing attack. The Mountaineers give up 240.8 yards a game through the air, and Jaivon Heiligh has proven difficult to stop when he gets going. He hasn’t scored in either of the Chanticleers’ past two games, and it’s only a matter of time before the Chants’ top receiver gets involved again.

Chase Brice just has not gotten comfortable with playing at App State, his third team in three years. You can forgive him for being “not Trevor Lawrence” in Clemson, but he wasn’t an accurate passer at Duke, and he’s starting to run into the interception problem again as the Mountaineers face better teams.
For the year, Brice has thrown for eight touchdowns and five interceptions, which looks good until you realize that six of his scores have come against Georgia State, Elon, and East Carolina. Against the stronger teams on App State’s slate, Brice has thrown for just two scores, and Georgia State is the only FBS team he’s played that didn’t pick him off at least once.
The Mountaineers never got started against Louisiana because they were their own worst enemy, turning the ball over four times. Nate Noel didn’t do much against Louisiana’s run defense, and Brice was completely ineffective throughout the game, scoring his team’s only touchdown on the run instead of through the air. The Mountaineers cannot afford to gain only 211 yards again if they’re going to have any hope of a victory.

Paying for your Halloween candy with Coastal cash has been an easy thing for bettors as of late, as Coastal has covered in seven straight games in October. The Chanticleers have also proven that they can do the job away from the Surf Turf, as they’ve covered in eight of their past ten trips away from Conway.
Meanwhile, App State has shown itself to be a team that doesn’t get the job done against quality teams. The Mountaineers have failed to cover in five straight games against teams that have a winning record, and they’re just 2-7 ATS in their past nine games against their own league members.
Coastal has only beaten App State once in the schools’ brief history, but it came last year as the Chanticleers established themselves as the team to beat in the Sun Belt East. But that game was in Conway, as the Chanticleers have yet to win in Boone.

It’s going to be clear and cool in western North Carolina, with temperatures falling into the mid-40s before the end of the evening. Wind won’t be a significant factor, as it’ll blow at seven miles per hour going west.

I’m sure App State is better than what it showed against Louisiana, but I don’t really think they’re good enough to overcome a three-point spread against this Coastal squad, even with the game being at home. App State isn’t getting the job done against good teams, and I think that’ll show itself again in this one. Give me the Chanticleers to keep rolling. Ever tried live betting? It’s the best thing since sliced break! Many online bookies offer live wagering; but one stands head and shoulders above the rest: Bovada Sportsbook! You get a 50% bonus too!