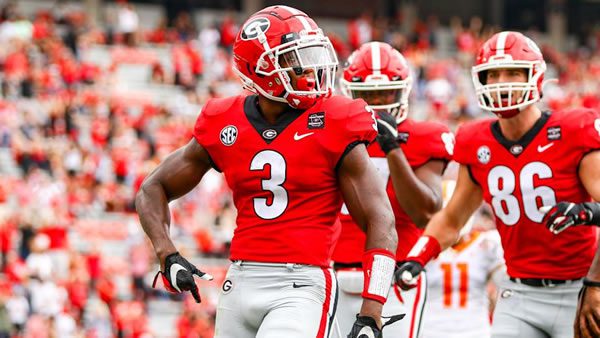 Where: Jordan-Hare Stadium, Auburn, Ala.

Georgia looks like it’s for real and looks absolutely frightening to this point in the season. The Bulldogs swatted away another seemingly tough opponent in Arkansas and have given up all of zero points in their past two SEC games. Georgia has surrendered one touchdown all season on defense, and that came against the Bulldogs’ backups with the game against South Carolina well out of hand.

That could be disastrous for Auburn, which has seen things slowly get worse for the offense after running through two patsies to start the season. The Tigers had no issues in their wins over Akron and Alabama State, but they’ve scored just 78 points in the past three games, an average of 26 points per game. That’s not bad by any stretch of the imagination, but it’s also nowhere near good enough to take down Georgia, which has averaged over 40 points per game while giving up a mere 23 points for the entire season. If something doesn’t change quickly, the Tigers are in big trouble against their old rivals.

How the Public is Betting the Georgia/Auburn Game

The money and tickets are both very impressed with Georgia, as the Bulldogs are getting 65 percent of the tickets despite being bumped from -14 to -15.5 since the game went on the board. The public thinks the extra points will come from Georgia’s offense, as the total has ticked up to 46.5

If J.T. Daniels can play, he’s the starter, but if he can’t, Stetson Bennett seems to have at least regained a measure of Kirby Smart’s trust. Bennett was the quarterback for the Arkansas game with Daniels sidelined, and while he wasn’t spectacular by any means, he also didn’t put the game at risk for the Bulldogs. Bennett is a game manager at this point in his college career, and if he does play, Georgia will likely lean on its running backs to try to keep the ball and the clock moving.

James Cook and Zamir White proved far too much for the Razorbacks to stop last week, and the odds are that Georgia will keep the ball on the ground for as long as it’s effective. Bennett only threw 11 passes against 56 running plays against Arkansas, and it’s clear that with its wide receivers mostly banged up, Georgia would rather run the ball as long as it can win the battle in the trenches.

Auburn is in a weird situation with its offense. Bo Nix has done far too much of everything over the past few seasons in Auburn, and with him running the show, the Tigers have been inconsistent at best. Bryan Harsin is in no way tied to Nix, but right now, Nix seems to be the best quarterback he’s got on his roster, so there’s little choice but to roll with him. Against LSU, he did what he does best, lifting the Tigers to a come-from-behind win over the Bayou Bengals by leading Auburn to two fourth-quarter touchdowns.

The question is whether Nix’s play will get the job done against a Georgia defense that appears to be invincible. Nix has the ability to take off and go quite well, but Georgia has seen all of this before from the Auburn quarterback and will likely make sure to keep him in the pocket. Whether Nix can find Demetris Robinson and John Samuel Shenker will decide if the Tigers can hang with the Dawgs.

This total is low for a reason. Over the past decade, Auburn has either had a great day against Georgia or the Tigers crash and burn and barely do a thing on offense. For the most part, it’s been the latter. Over the teams’ past 11 matchups, Auburn has topped 14 points just twice — the two games they won. In their two wins, Auburn scored 83 points on Georgia. In nine losses, the Tigers combined to score 71 points.
As you might have guessed, Georgia usually doesn’t need much offense to win, and Georgia usually doesn’t get much offense in this series. The Bulldogs’ past four wins have all seen them held to 30 points or less, and the Bulldogs haven’t broken 30 in this series since 2014. However, Georgia has covered in four straight matchups, and the home team is 11-4 in the past 15 meetings.

This should be a pretty good day for football in the Deep South, with temperatures pushing into the high 70s on a sunny, pleasant day. Wind will blow north at six miles per hour, so it won’t have an impact.

I’m not sure there’s going to be much scoring here. Georgia looks like the stronger team and should control the trenches, making it difficult for Auburn to get much going. The Bulldogs might not score more than 21, but they probably won’t need more than that. Give me Georgia to win a low-scoring battle. Bet your week 6 college football picks for FREE by taking advantage of a 100% REAL CASH bonus on your first deposit of $100 to $500 at GTBets!