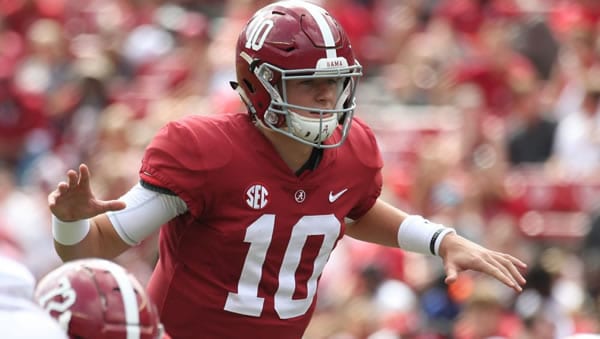 The Buckeyes haven’t been in the championship game since that run, but they made a strong statement in the Sugar Bowl against Clemson, taking control of the game early and playing like a team that’s sick of the disrespect that’s come from only playing a seven-game season and needing a waiver to get into the Big Ten championship game. But they’re the only team that can claim they’re undefeated against Alabama in the the playoff, and the Tide didn’t look quite itself in the second half against Notre Dame. Ohio State’s already come up with a big win nobody thought it could once; can the Buckeyes do it again?

How the Public is Betting the Ohio State/Alabama Game

One reason that the public is expecting a lot of points is the show the Buckeyes put up against Clemson. It’s rare to do what Justin Fields did against a Brent Venables defense, and the Buckeyes did it so well that it brought back memories of what Joe Burrow and friends did against Clemson in last year’s title game. Ohio State piled up 639 yards of offense, and the Buckeyes did it without Master Teague on the field. Trey Sermon was unstoppable, gaining 193 yards on 31 carries.

The key is whether the Buckeyes can do it again against an Alabama defense that has alternated between dominant and pedestrian. Over the final month of the season, Alabama’s defense looked like a championship unit, but the Tide also memorably gave up 48 points at Mississippi early in the season (for reference, the Tide gave up just 53 points in their final six regular-season games combined), so it’s certainly possible to move the ball against Alabama. In order to do it, Fields will have to be as good with his decision-making as he was against Clemson. Fields’ biggest problem has been his decision-making, as the Buckeyes’ closest call came in part because Fields tossed three interceptions against Indiana and nearly let the Hoosiers back in the game. If the Buckeyes cough it up three times in this game, it’s hard to see them staying in the game.

DID YOU KNOW… YOU CAN BET ON GAMES AT -105 ODDS INSTEAD OF -110! THIS SAVES YOU HUNDREDS (THOUSANDS FOR BIG BETTORS) OF DOLLARS! FIND THIS HUGE MONEY SAVING OFFER AT ONE OF THE WEB’S BEST BOOKIES: BETANYSPORTS!

Nick Saban dropped a bombshell on Tuesday when he said that there’s a chance that Jaylen Waddle could return to the field, which would be a massive lift to an already explosive offense. Waddle was so effective in the four games he played that he’s still Alabama’s third-leading receiver of the year, despite the fact that he hasn’t played since the Tide’s fourth game.

Even more remarkable is the fact that Alabama hasn’t seemed to miss him in the slightest. Mac Jones has 36 touchdowns to his name against four interceptions, and nobody has been able to stop Najee Harris (24 touchdowns) on the ground or DeVonta Smith (20 touchdowns) through the air. This might be the most explosive offense that Nick Saban has ever had in Tuscaloosa, and that’s saying quite a bit.

The problem with betting on Alabama is one that Tide bettors know all too well: Alabama occasionally has an annoying tendency to let its foot off the gas once it has the game well in hand. That happened against Florida and Notre Dame, which is why the Tide have failed to cover in each of their past two contests. Alabama might be a good team to cash out on or even bet the first half, as the Tide will give maximum effort in the first 30 minutes. After that, though, if they have the game wrapped up, there’s a good chance that they back off.

Bet against Ohio State in January at your own risk, as the Buckeyes have covered in each of their past five games during bowl season. Of course, Ohio State hasn’t had to play in a second January game in quite a while, as they haven’t been in the championship since 2014. Alabama is old hat at this, and one of the reasons for it is that the Tide have dominated the Big Ten when they’ve come up against a league member. Alabama is 7-1 ATS in its past eight meetings against the Big Ten, despite being just 1-4 ATS in its past five bowl games.

Part of the Tide’s failings at covering is because the public seems to genuinely believe in the Tide no matter what the number actually is. Alabama hasn’t managed to cover in any of their past four games in the playoff (the one cover the Tide managed was last year’s bowl game), but the Tide have been money at hitting the total in championship games. Even though it failed to cover in any of those past four games, Alabama has hit the total in each of them. But that doesn’t fit well with Ohio State’s recent performances, as the Buckeyes have gone under in four of their past five postseason games.

The weather actually could be a factor, as showers are expected on Monday evening. Temperatures won’t be a problem, as the mercury is supposed to be at 63 degrees, while wind will blow southwest at nine miles per hour.

I think Alabama’s the better team, but I’m honestly quite worried about the Tide letting the Buckeyes back into the game late and allowing a backdoor cover. Ohio State can score like nobody’s business and just might be able to keep pace with Alabama’s offense.

I feel most confident about backing the over and expecting a shootout, but even though I think the Tide is the better team here, I’m just too worried about Alabama deciding that it’d be okay with a one-touchdown win. Give me the Buckeyes and the hook. Bet your College Football Championship pick LIVE while the game is going on at Bovada Sportsbook! They’ll give you a 50% bonus up to $250 too!