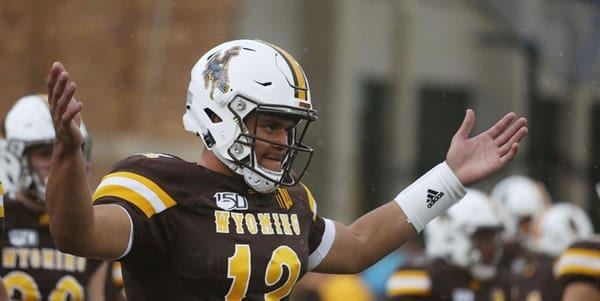 It’s Border War week in Laramie, as the Cowboys try to achieve a four-game winning streak over their archrivals for just the third time in their history. Over the past decade, this series has been the Cowboys’ domain, as they’ve won seven of the previous 10 for what’s easily been their most dominant stretch against Colorado State since the early 1970s when Wyoming ripped off seven straight against the Rams.

This time, Colorado State has to find a way to end the streak, or the Rams won’t be participating in postseason play. Given that defeat here would not only secure a losing season for Colorado State but also give the Rams a four-game losing streak against all three of its biggest rivals (Wyoming, Air Force and Colorado, the last of which has won five straight over CSU), it’s hard to imagine Colorado State coach Mike Bobo coming back for a sixth season in Fort Collins if he loses here. Given that the Rams are coming off a loss to Air Force, it’s reasonable to wonder as to what Colorado State has left in the tank as it prepares for this game.

How the Public is Betting the Colorado State/Wyoming Game

The total has dropped slightly, falling from 50 to 49. But the drop in total came with an increase in faith in Wyoming, as the Cowboys started at -7 before jumping to -7.5.

Colorado State:
Tight end Cameron Butler is questionable with an undisclosed injury, and quarterback Collin Hill is out for the season with a torn ACL.

Wyoming:
Running back Xazavian Valladay is probable after a knee injury, while linebacker Ben Wisdorf is questionable with a lower-body issue.

When Colorado State Has the Ball

Patrick O’Brien has done a nice job directing the Rams’ offense, tossing for more than 300 yards in three of the past four Colorado State games. Where the Rams run into problems is when they either don’t have the ball or try to get their running game going, because there isn’t much of a running game to speak of. Marvin Kinsey is Colorado State’s only real threat on the ground, and he hasn’t exactly lit
the world on fire in his recent performances, failing to hit the century mark in any of the Rams’ past three games.

The main reason Colorado State has struggled so much is that the Rams keep asking the offense to throw its way out of tough situations. While that can work at times, the Rams’ defense and rushing attack haven’t provided anywhere near enough support to make it an effective strategy.

When Wyoming Has the Ball

The fact that Wyoming is even bowl eligible at this point is a testament to the work that Craig Bohl has done on the defensive side of the football. Given that Sean Chambers has been out for the season since the middle of October and Tyler Vander Waal isn’t up to the task of running the Cowboys’ offense at this point in his career. Last week’s game was a perfect example of the Cowboys’ struggles with the ball, as they could have pulled out a win if they’d received better quarterback play from Vander Waal, who tossed three picks in the loss to Utah State.

Fortunately for the Cowboys, Xazavian Valladay is set to play, giving Wyoming a real option for its ground game. Valladay isn’t a great back, but 869 rushing yards is a solid number that gives the Cowboys something to work with when they do have the ball. Otherwise, there isn’t a lot available for Wyoming to work with given the injuries it has had; the best-case scenario for the Cowboys is grinding the clock down and hoping Valladay can make the difference.

Colorado State has done an excellent job at bouncing back this season, as it has won its past four ATS after losing the previous week ATS. However, Colorado State doesn’t really like to play on a turf field, as the Rams are just 2-7 ATS in their past nine games on the artificial surface. Wyoming also bounces back well, having won four of its previous five games ATS after taking an ATS defeat. History does suggest good things for the Rams given that the road team has covered in five of the past six meetings, but three of those came when Wyoming was making the trip south to Fort Collins. Betting the over has paid well in this series, hitting in five of the past seven meetings, but eight of Wyoming’s past nine in November and all six of Colorado State’s previous six games in the 11th month of the year have gone under the total.

This is classic Mountain football weather, as the kickoff temperature is projected to be at around 35 degrees.

This is a battle of strength on strength, as Colorado State’s offense has shown that it can move the ball well all season, and Wyoming’s defense has kept the Cowboys in every game they’ve played this year. But beyond that showdown, there’s another battle that should lead to the way this game is decided: Wyoming’s solid rushing game against Colorado State’s poor rush defense. The Rams give up more than 200 rushing yards per game, and if they can’t stop the Cowboys’ rushing attack, they’re going to have a hard time getting the Wyoming offense off the field and allowing their own offense to attack. Where do you place your college football bets? Does your book offer you discounted odds at -105? NO! Stop wasting your hard earned cash and get betting smarter by taking advantage of reduced juice wagering at BetAnySports!