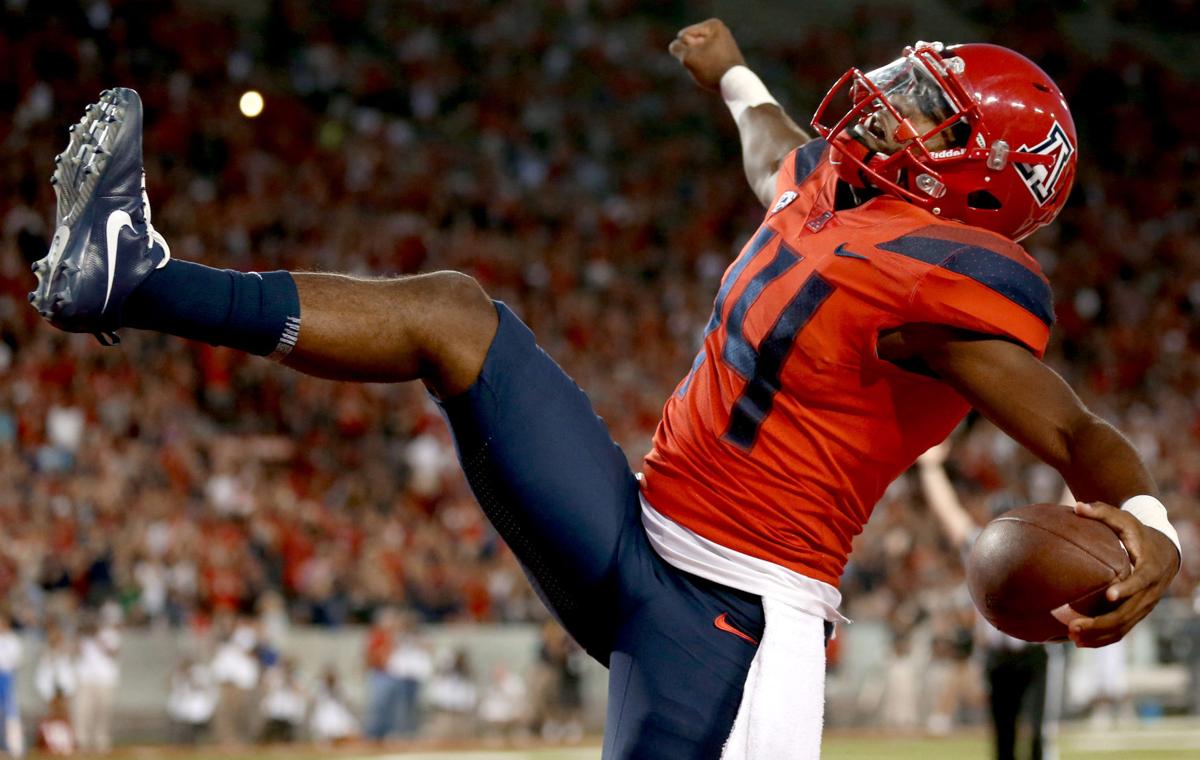 The Colorado Buffaloes come down to Tucson to take on the Arizona Wildcats on Friday in an interesting week ten Pac-12 matchup. I think the Wildcats are going to win this game and cover the spread. It’s not just because they scored a season-best win over Oregon last week. The Kevin Sumlin-led bunch is seeing some things start to fall their way and the total package will be a bit much for the freefalling Buffaloes. This type of arithmetic never really works out, but Arizona beat Oregon by 29 points last week, while Colorado found a way to lose to Oregon State at home.

Again, trying to make linear sense of this conference has proven to be nearly-futile. Therefore, those types of storylines hold only so much water. Just last week, the point spread was off by 36 points in Arizona’s win over Oregon, while it was only off in Colorado’s loss by 31.5 points. That’s just to give you a sense of the range. When betting on Pac-12 games, especially at this middling level, you’re either going to feel like a genius or a big old dope.

Where is Colorado Right Now?

A 5-0 start for Colorado has evaporated into the crisp Rocky Mountain air. They looked sharp to start, winning some games very handily, before running into better conference teams. You could even give them a pass for losing in tough road-spots to USC and Washington. But to be up 31-3 and become the first team in 23 games to lose on the road to a woeful Oregon St. team is a hard predicament in which to emerge intact. We’ve seen mistakes-galore and a lack of concentration in the last several weeks. Just in terms of overall team spirit, they might have a better W-L record than Arizona, but the Wildcats are brimming with hope, while Colorado has traveled a long distance from being 5-0 to where they now stand.

With Steven Montez at quarterback along with weapons like RB Travon McMillian and WR KD Nixon, the Colorado offense has power. Losing WR Laviska Shenault, Jr. (questionable) for the last few games has hurt, as he already had 11 touchdowns. He could be back. And their running game has a lot of versatility, with Montez adding a lot of bite, along with Shenault, Jr. Arizona may have looked good against a struggling Oregon run-game last week, but it’s an area where they have struggled this season and Colorado could produce in that area. And Shenault, Jr. remains a big X-factor in this whole equation. If he plays and is close to his best, the Colorado offense would have some options against a defense that may have shown some improvement last week, but simply isn’t very good.

CLICK HERE TO START SAVING BIG MONEY BY BETTING ALL YOUR FOOTBALL GAMES AT -105 REDUCED ODDS!

One doesn’t want to take the story and run on the heels of a team’s season high-point. Arizona beating Oregon by 29 with QB Khalil Tate returning does reflect well on a team that has struggled massively at points this season. The offense moved smoothly, and the defense wasn’t getting shredded for a change. More importantly, they seemed to be really into it mentally—something that hasn’t been seen much with their opponent as of late.

A lot of passion was seen on offense for Arizona, where everyone seemed to galvanize with Tate returning to the fold. He threw for three touchdowns against the Ducks and is also a threat to break open plays with his legs. Backs JJ Taylor and Gary Brightwell (questionable) have combined for over 1500 yards. Receiver Shun Brown, Shawn Poindexter, Tony Ellison, Devaughn Cooper, Cedric Peterson, and Stanley Berryhill, III. are all talented ball-catchers. The offense has a lot of talent. They’re on the upswing, and the Colorado defense is most definitely on the downswing and will be hard-pressed to contain all of Arizona’s weapons.

Sometimes that’s all it takes to make a bad defense more-serviceable. With the offense clicking and a higher level of overall urgency, the Arizona “D” was tangibly better last week. They had a nice playmaking element to them and seemed to respond to some team-wide urgency last week. Still, they’re not one of the better defenses Colorado will face this season. And while the Buffaloes have had issues with consistency and rhythm; they haven’t struggled to move the ball. As the Arizona defense goes, so does their whole team.

When looking at Arizona, you may not see a team getting the best results, losing to UCLA the week before they beat Arizona, albeit without Tate. Still, they’re a team that has shown they can “will” themselves to be better than they are on paper. They have a gifted QB and some talent at running back, but their aerial game is nothing special, their line can be overpowered, and their defense has fringed on slapstick-status at times this season. But they’re into it. They’re trying and responding to their coaches’ pleas for increased urgency. Colorado was coming off two straight losses, gifted with a chance to get back on the winning track against a sorry Oregon State team and up 31-3. Why would they coast? What is there to coast about? And no response after Oregon State scores one, two, three, four second-half touchdowns? No answers in OT?

Arizona is far from what you would call a bankable proposition, but those don’t exist when betting the Pac-12. Colorado hasn’t been able to stop much of anything, with different-styled offenses thriving against them—both with the run and pass. This week, the Buffaloes’ defense will be up against it in a tough road spot. That could also be said about the Arizona defense, but I see the greater versatility of Arizona’s offense and their overall better state-of-mind carrying them to the win and cover at home.

Loot’s Pick to Cover the Point Spread: I’m betting on the Arizona Wildcats minus 4 points. Editors note: The line has now dropped to three points making Loot’s play even stronger and since I have your attention make sure you are getting best value each bet by wagering at a sportsbook that offers lower vig.