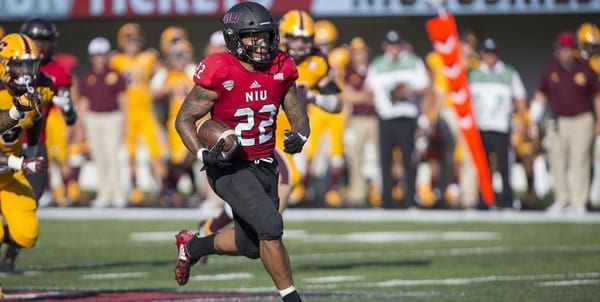 It’s all or nothing for Northern Illinois, which won’t be going to the postseason without beating Eastern Michigan. The Huskies have faced an absolutely brutal schedule this year that’s seen them play four of their past five games on the road, so for them to even have a chance at a bowl game is a testament to their work on the road, as they’ve picked up away wins over Ohio and Toledo. If history is any indication, they’ve got the opponent they need. They’ve won 17 of their past 18 against their rivals from Ypsilanti, including each of the last 11 meetings.

If it can end its horrible history against Northern Illinois, Eastern Michigan would become bowl eligible for the third time in four years. That’s no small feat for a MAC squad that has made a bowl only four times in the history of its program, with two of those coming in the past three seasons. If the Eagles played in the MAC’s East Division, which is home to a pair of pathetic squads in Bowling Green and Akron, they’d almost certainly be there already, but alas, they’re in the stricter West and only Akron showed up on Eastern’s schedule this year, forcing the Eagles to do this the hard way. Eastern did come off a win over Akron last week, but the Eagles are struggling, having lost four of their past six after a 3-1 start that included road wins at Coastal Carolina and Illinois.

How the Public is Betting the Eastern Michigan/Northern Illinois Game

The line has had little chance to move off of its 4.5 point spread, but the total has increased slightly, up to 54 from 53.5 and the opening.

Get all of our handicappers game previews including detailed analysis, betting angles and picks against the spread.

If Shaq Vann could run anywhere near as well as he did against Akron every week, the Eagles would have a much better ground game. But that’s what playing the Zips can do for an offense. More often, the Eagles don’t commit to the running game and instead try to take to the air to keep pace with their opponent. More often than not, that’s worked out decently but not great for Eastern. Mike Glass is a competent quarterback who’s able to get out of the pocket when necessary and tends not to force the issue when it’s not there. For the season, he’s had three multi-interception games: a forgivable two-pick showing at Kentucky, a two-pick outing against Central Connecticut State that he offset with four touchdowns and a poor showing at home against Ball State that directly cost the Eagles with three interceptions. He hasn’t thrown a pick since the Ball State game, but he hasn’t seemed to trust his arm as much either. Over the past three games, he’s tossed just two touchdown passes, a significant reason why the Eagles went 1-2 in those contests.

When Glass goes to the air, look for Mathew Sexton and Quian Williams to be his top targets, with Arthur Jackson serving as the big-play receiver.

Unlike Eastern, the Huskies can run the football. In fact, they prefer to run the ball, and they prefer to hand the ball to Tre Harbison, who has accounted for 899 yards on 200 carries this season. Given the average throwing that they’ve been getting from Ross Bowers at quarterback, the Huskies prefer to keep it on the ground as often as possible, as Bowers hasn’t thrown multiple touchdown passes in a game against an FBS team this season. Against MAC competition, he’s managed just three scores against five interceptions, as he missed the Akron game and only got to play for part of the contest against Miami-Ohio.

Over the past few weeks, Harbison has gotten going, carrying for 158 yards in wins over Toledo and Akron and adding 113 against Ohio. When the Huskies are able to keep feeding him, good things usually happen. Don’t look for anything spectacular out of this offense; NIU’s ideal game plan involves handing it off often and asking Bowers to make plays only when absolutely necessary.

This matchup has been one-way traffic straight up, but Eastern has been fairly competitive against the spread against Northern Illinois. Over their past nine trips to DeKalb, the Eagles have left with a cover six times and pushed in a seventh game. However, the past three trips to the Land of Lincoln have included the two instances where the Huskies covered, as NIU won by 39 in 2013 and 28 in 2015. These teams have also tended to put up a lot of points when they face each other. Over bettors have cashed their tickets in four of the teams’ past five meetings in DeKalb. Both sides have been undervalued a fair amount this season, as Northern Illinois has seen five straight games hit the over, while Eastern has gone over in each of its past five road games. The one worry exists with both teams: neither has managed consecutive wins ATS in a while. Eastern is 0-5 ATS when coming off a spread victory, and Northern Illinois has lost four straight ATS after an ATS victory.

This could be a rather nasty evening to play football, as temperatures will hover around 41 degrees, and a wintry mix is in the forecast (check local weather).

Northern Illinois is a desperate team, while Eastern Michigan still has another shot against a much more beatable opponent next week. Of course, I’m sure that Eastern is desperate to end the losing against Northern Illinois, but that doesn’t mean that I think they’ve got the ability to do it. Eastern’s run defense is not good, and the weather conditions for this game very much favor a running attack, as passing could be tough to do if the skies open up.

Eastern Michigan can’t run it very well, but Northern Illinois can, and Eastern doesn’t have the defense needed to stop the Huskies. That adds up to a bad combination for the Eagles, and that’s why I think the streak continues for NIU. Give me the Huskies to get the cover and keep their bowl hopes alive.