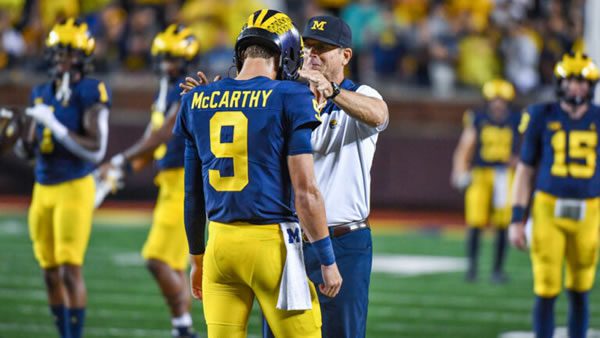 The TCU Horned Frogs meet the Michigan Wolverines in the Fiesta Bowl on Saturday, a game that also doubles as the College Football Playoff Semifinal. The winner of this plays for the national championship, to put it simply. We have two programs that are usually good, but both long pine for a shot at the top slot, something the winner of this game will get. The Wolverines put a cap on a perfect regular season at 13-0 with a 43-22 win over Purdue on December 3. That’s also when TCU last played, seeing their perfect season come crashing down with a 31-28 overtime loss to Kansas State. Who can get the upper hand in this one?

It’s a simplified question, but now is a time to take in what has occurred in an attempt to establish lines of quality. To low-rate TCU could be the wrong approach based on losing their last game to KSU and the fact that eight of their wins were competitive affairs. They lack the dominant string of performances that the other teams in CFP do, and that loss was a sticking poor final image of their season. Still, they’re an ultra-dangerous team that really responded to first-year head coach Sonny Dykes, featuring a balanced offense that is good for over 40 points a game on average. And until the end, it worked against everyone in the Big 12.

A 13-0 Michigan team flexes perhaps the best defense in big-time college football, allowing just over 13 points a game on average, with future NFL talent littered throughout. They look to wield that on TCU and keep them under control while flexing a massive run-game on a TCU defense that doesn’t shine in that or really any area. Just from a naked-eye view, we see a ton more blowouts, their defense controlling the games, and a more dominant overall product. Combine that with the quality of their wins, which includes a resounding win over another CFP participant in Ohio State. Then we start to see why the Wolverines are solid favorites in this matchup.

Top Michigan RB Blake Corum will not be cleared for this game. The Wolverines should be able to absorb the loss with a stacked running back corps, though one would prefer not to see a compromised Donovan Edwards in there with his ongoing hand/wrist issues. But the word is he will be a go, as will top LB Mike Morris. For TCU, wide receiver Quentin Johnston looks to be healthier and will be a go, a weapon they hope will help put them over the hump and a definite X-factor who can make an impact.

QB Max Duggan is a real weapon, with over 3300 yards passing with 30 TDs and just four picks on the season. He doesn’t really make a lot of mistakes and is gifted with a full toolbox. Johnston really gives him another angle. With over 1300 yards and 17 touchdowns, Kendre Miller is a real weapon in the backfield, along with some other talented backs and a QB in Duggan who can also exact a toll with this legs. With a gaggle of receivers with a knack for finding the painted area, it’s no wonder why this offense has been hell on opponents, even in a conference where offense is the name of the game. And while one can maintain well-found hope that Michigan’s defense can be the antidote to this, TCU will be in good stead if this game finds a way to be a more offensively-themed event.

Good Spot for the Wolverines?

Michigan QB JJ McCarthy has shown he plays better when the stakes are high and that he is a real gamer. He’s a little more accurate than Duggan while not having the same explosive aerial upside as TCU. Still, top receivers like Cornelius Johnson and Ronnie Bell should be able to do damage against a TCU secondary that isn’t very solid. What really helps bring it together is a Michigan offensive line that is solid throughout. They look to make a big difference in this game, with the TCU pass-rush facing a tall order in this one. Meanwhile, it’s hard not imagining the Michigan defensive line having success in this game.

In this battle, you could see TCU maybe having aerial success. The Michigan secondary might get pushed in this game, despite having big talent at corner. It’s still conceivable that this is a problem area. But it would seem to pale in relation to the Michigan run-game and what they might do behind this O-line. How much stoutness will TCU realistically be able to bank upon in Glendale? They need big plays on offense, as they won’t be able to sustain 12-play drives and will be looking for splash plays.

Even the most unashamed Michigan apologist would concede the danger in this spot, especially laying over a TD against a TCU team with this much offensive juice and fighting spirit. They have staged numerous comebacks, play with a lot of heart, and can definitely make enough big plays on both sides of the ball to upset the Michigan formula. I just perceive the routes to success being more numerous for Michigan, and between their run game, offensive line, defense, and the possibility that McCarthy can do damage aerially on this TCU secondary, it will be too much for the Horned Frogs to overcome. I’ll take Michigan.

Loot’s Pick to Cover the Point Spread: I’m betting on the Michigan Wolverines minus 7.5 points. Kick 2023 off right with free bowl game and Week 17 NFL bets! Deposit $100 to $300 and use promo code PREDICT100 and you’ll receive a massive 100% real cash bonus at MyBookie Sportsbook!