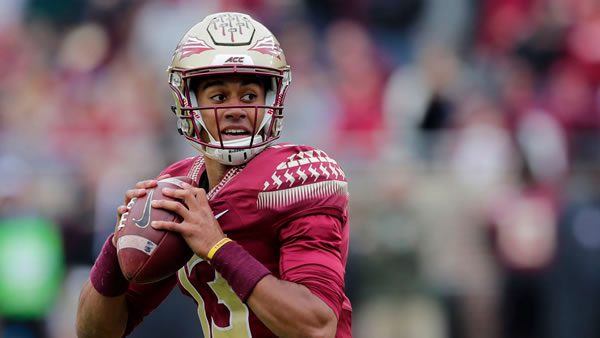 Point Spread: FSU -1.5/LOU +1.5 (Wagerweb - You can make Louisville a +21.5 underdog by inserting them into a GIANT 20 point college football teaser!)

A pair of ACC squads looking to prove themselves square off in this matchup, which has been a royal pain for Florida State bettors as of late. Not only have the Cardinals won four of the past six matchups in this series, but Louisville has covered in five of its past six meetings with the Seminoles. Florida State looked very good against LSU after routing Duquesne in its opener, and there’s a real chance that the Seminoles might be a dark horse to win the Atlantic if they can keep their momentum going.
Louisville looked terrible against Syracuse, but the Cardinals bounced back with a strong defensive effort against Central Florida. However, there are still questions about whether Louisville’s Week 2 win had more to do with UCF’s offense stopping itself or with the Cardinals waking up after a poor showing in Week 1. The Cardinals’ passing attack left a lot to be desired against Central Florida, but they kept the clock moving and gashed the Knights with Malik Cunningham’s running ability. Given that Florida State struggled to contain Jayden Daniels, this game might play into Louisville’s hands.

How the Public is Betting the Florida State/Louisville Game

The public hasn’t had time to impact this game. The line has just come on the board at the time of this writing, and neither line nor total has changed.

The ground game has to be better than it was against LSU. That’s the bottom line for Florida State, which was honestly fortunate to survive the Tigers and pull off a victory a week ago. The Seminoles won because of their passing attack and special teams’ play, not because of anything that the rushing attack did. Treshaun Ward averaged just 3.1 yards per carry for the game, and no other Florida State player had more than 31 yards on the ground for the game. Throw in a fumble that kept the Seminoles from running the clock out, and it’s easy to say the run game was a horror show.
But the passing attack was solid, as Jordan Travis proved accurate with his throws and got going with Ontaria Wilson for 102 yards and a pair of receiving touchdowns. Florida State is going to have to beat teams through the air this season based on the first two weeks of the season, as this team seems dependent on how accurate Travis’ decision-making skills are. So far, it’s worked out for the Seminoles, but it’s a long season. There’s a real question as to how well it might work this time because Louisville basically shut down UCF’s pass attack last week, but there’s also a fundamental question of whether the Knights’ offense is any good or not.

The Cardinals basically had two moves against Central Florida: let Malik Cunningham take off, and occasionally mix in some passes to keep the defense from overloading the box. It worked to an extent: Cunningham did just enough with his arm to allow him to run wild on the Knights when he took off with the ball. Cunningham was the leading rusher by a mile for Louisville, gaining 121 yards on 17 carries in the win.

However, everything else is a real worry. Tiyon Evans did not get started in that game, managing a mere 3.9 yards a carry against a defense that could not keep up with Cunningham. When Cunningham did throw the ball, it wasn’t that effective, as he managed just 201 yards and completed less than half of his passes. Plus, none of Louisville’s pass-catchers caught more than three balls.

So is Louisville a one-trick pony? It’s hard to say because the Cardinals probably won’t get exposed in this game. The Seminoles were helpless against Daniels running the ball at quarterback in New Orleans. Cunningham presents many of the same problems, so this could be a tough ask for FSU.

More Picks: Get our recommended pick against the spread for the Uconn/Michigan Week 3 game

One thing Florida State’s been doing as of late is keeping points off the board. Six straight FSU games have cashed to the under, and the Noles’ defense has allowed only 30 points in 2022 (granted, one of those games was against Duquesne, so that hardly counts). However, Louisville has tended to put up points when facing FSU: the teams have played four straight to the over and the Cardinals have not failed to score at least 21 points in any of their eight meetings with Florida State. Only once (2018) has the winning team failed to hit at least 30 points in this matchup.

Louisville has just 12 covers in its past 41 meetings with a team with a winning record, but in Florida State, they get the opponent they need: they’re 5-1 ATS in the past six with the Seminoles.

This game will have perfect weather, with temperatures hitting 65 degrees at kickoff in Louisville. No rain is in the forecast, and wind will blow east-southeast at five miles per hour.

I don’t really know whether Louisville is more the team that couldn’t do anything against Syracuse or the team that shut down UCF, but in both cases, the Louisville offense didn’t really do all that much. Because of that, I really like the under, as I think the Cardinals will slow down Florida State but will also struggle outside of the big plays.

As for the spread, I think Florida State is for real and the jury is out on Louisville. I’m going to side with the Seminoles in this one. Rough week last week? Instead of re-depositing at your sportsbook and receiving NOTHING, consider grabbing a 100% real cash bonus up to $300 by using bonus promo code PREDICT100 at MyBookie Sportsbook! Already have an account there? Check out our Sportsbook Promo Codes page for other bonuses up to 125%!