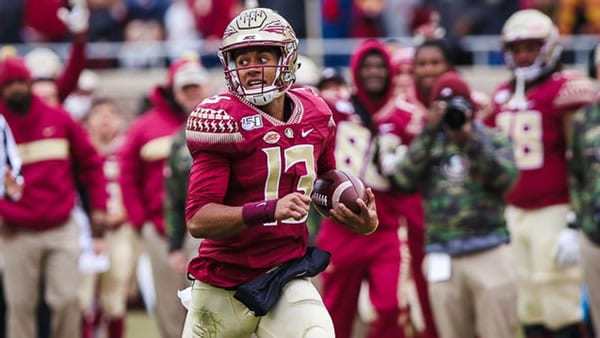 For Brian Kelly, this has to have the feelings of déjà vu. A year ago, his Notre Dame squad opened the year on national television against Florida State, ultimately holding off the Seminoles in a game that was a battle at the end. Fast forward a year, and Kelly is yet again opening with Florida State, even though he’s traded blue for purple. That could make the transition a little easier in his first game leading LSU, but the Bayou Bengals remain college football’s biggest wild card at the moment. For Mike Norvell, it’s now become a major pressure situation in Tallahassee. The Seminoles are quickly running out of patience after just one bowl in four seasons, a major fall from grace for a program that was once competing for national titles. There is some reason to hope here if the Seminoles can figure out how to win the close games, as Florida State had three defeats of exactly three points and two others of 10 points or less. But at the same time, that also described Nebraska, and the Cornhuskers proved to be the same team as always in Week 0. Florida State looked like it had taken the lessons of 2021 in destroying Duquesne, but at the same time, it was only Duquesne. This game should prove a much tougher test.

How the Public is Betting the Florida State/LSU Game

Florida State knows it’s not going to be anywhere near as easy as it was last time out, but the fact remains that the Seminoles barely broke a sweat in demolishing Duquesne. The Dukes allowed 406 rushing yards, leading three different Seminole backs to get to 100 yards on the ground. That number won’t happen again, but it is a hallmark of how Mike Norvell wants his team to play. The Seminoles ran the ball well in both of his first two seasons in Tallahassee, and they were at their best when the ground game was at peak efficiency. They’ll especially want to pound the rock in this game because LSU’s run defense was rather suspect a season ago. Kentucky, Mississippi, and Kansas State all ran the ball right down the Tigers’ throats a year ago, and the Seminoles have the talent and blocking ability to do the same. Getting improved play out of Jordan Travis would also make a big difference. The Seminoles’ passing attack was a bit suspect last season because they could never get settled on any one signal caller in the early part of the year. Travis is the leading man running the Seminoles’ offense this year, and if he can stay healthy and build on his connection with Ontaria Wilson, there’s a lot to like about this attack.

On paper, LSU looked like it had a solid rushing game last year, given that Tyrion Davis-Price rushed for 1,003 yards and six touchdowns. The problem was that LSU collapsed when almost anyone else touched the ball. The Tigers only managed 3.3 yards per carry last season, and the only game where they really ran the ball well came against Florida. There’s a lot that was lost in Baton Rouge, as the Tigers lost four starters from an already suspect offensive line and bring in a new signal caller in Jayden Daniels. Daniels should be an improvement if he gets time to throw, but with so many new pieces in place, that’s going to be a difficult ask at first. The Tigers are essentially trying to compete with an entirely new team in several areas, which can work over time but might be a challenge in the early going. Given that Florida State already got some game action, LSU might get off to a slow start on offense here.

If you were brave enough to bet the Seminoles last season in the second half of the season, they rewarded you nicely by going 5-2 ATS in their final seven games. However, slow starts have been a hallmark of Florida State in recent years, as they’ve covered just one of their past six in September. And no, it didn’t come last week against Duquesne; the Seminoles were giving the Dukes 42.5 points and simply let off the gas once it became clear they had an easy win locked up. LSU and the SEC might want to claim that it means more in the league, but it’s been outside the league recently, where the Bayou Bengals have proven a bad bet. Last year, the Tigers played five games outside the SEC and managed to lose two of them (UCLA and Kansas State) while covering in just one of the five (Central Michigan). Against Florida State, Kelly was just 2-3 ATS in five meetings at Notre Dame.

The game is indoors at the Saints’ dome in New Orleans instead of up Interstate 12 in Baton Rouge, so the weather will not be a factor.

For all the struggles that both of these teams have had over the past two seasons, Florida State is actually the team with more continuity. Norvell seemed to right the ship in the second half last season, and Florida State also has a game under its belt in 2022. LSU has too many new faces and too many new pieces to really trust in this spot. I think the Tigers might get it figured out eventually, but they could have used a warmup game to get on the same page. As it is, I like the Seminoles and the points, and Florida State might win this outright.