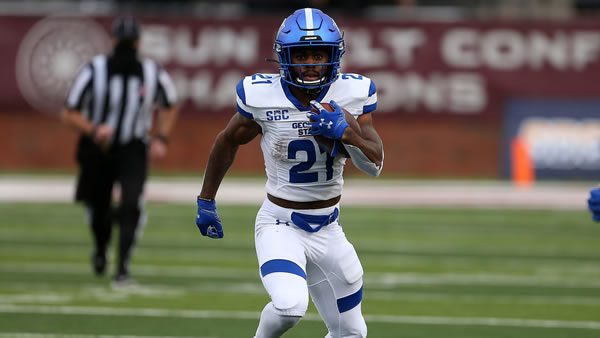 With stunning losses from Coastal Carolina and James Madison last week, the Sun Belt East’s division race is suddenly wide open again. Old Dominion is the only undefeated team in the division, and even though the Monarchs just boat-raced Coastal, almost nobody expects them to hold their undefeated status throughout the Sun Belt schedule. And that means App State, left for dead after losing to James Madison and Texas State is suddenly very much alive in this league race.

However, the same is true of Georgia State, and the Panthers believe that the opportunity is there to take down App State after watching the Mountaineers drop two Sun Belt games and nearly lose a third to Troy. Georgia State has never beaten App State in eight tries, but the Panthers come into this game playing well and riding the momentum of two consecutive victories. The last time they were here, they fell just four points short in a 17-13 loss to the East Division’s most consistent program. Can they fix things and earn the win this time?

How the Public is Betting the Georgia State/Appalachian State Game

The Panthers did what they had to do in handling Georgia Southern last week. They didn’t ask Darren Grainger to do too much, and their running game proved excellent in exposing the Eagles’ shortcomings on that side. Sometimes, the best thing you can do as far as winning a game is to not lose it, and that’s exactly what Georgia State did in keeping the ball on the ground and keeping the clock moving.

It is another question whether the Panthers can do it against App State because Texas State couldn’t run the ball last week against the Mountaineers’ defense. App State has proven very susceptible to the pass, but on the ground, most teams don’t have much success. The Bobcats were in an ideal position to run the ball and run the clock with a 27-point lead, but they still couldn’t scratch out more than 1.8 yards per carry.

Tucker Gregg has proven a capable back for the Panthers, but he didn’t do the job at all last year against App State. After gaining 12.5 yards per carry against Auburn, Gregg got just three carries for 10 yards against the Mountaineers, and the team itself rushed for 135 yards on 40 carries. That isn’t going to work if Georgia State hopes to get a win here; the run game either must improve in its battle with the Mountaineers, or Grainger is going to have to try to win with his arm.

On the one hand, Chase Brice put up solid numbers for Appalachian State last time out against Texas State. However, Brice did most of that work after the Mountaineers played one of their worst halves of football and spotted the Bobcats a 30-3 lead. Of App State’s first seven drives against the Bobcats, three ended with punts, three ended with turnovers, and just one ended with points: a field goal at the end of the first half.

And that’s the biggest issue with these Mountaineers: When they play a languid half, it really comes back to bite them in a big way. App State didn’t do a thing on the ground last time out against Texas State, and the poor showing meant that Brice had to keep putting the ball in the air. Putting up 53 passes really isn’t going to win you a lot of games, even when you have Dalton Stroman and Christian Horn stretching out the defense. App State has to get something, anything, from its run game against Georgia State after gaining a mere 41 yards on the ground last week. The Mountaineers also have to avoid turning the ball over, given how opportunistic Georgia State is on defense. Last week, the Panthers forced five turnovers against Georgia Southern, which proved the difference in the final score.

This is a series that App State has owned since it became a Sun Belt game. Georgia State has never beaten App State, and the Mountaineers have only failed to cover twice in the past seven matchups. And now the bad news for App State bettors: both games where the Panthers covered came in Boone. Georgia State has actually played a lot better on the road in this series, as none of the games in Atlanta have been particularly close.

That’s because Georgia State has looked stuck in neutral or even reverse when it comes to trying to score on App State. Things have gotten better for the Panthers over the past four years, but they’ve still only topped 17 one time in the series, that coming in 2019. If you’re looking for points from this Panthers’ team, history says that’s probably not going to work, as Georgia State only tends to put up numbers in garbage time in this series.

This is not going to be an ideal night for football. Winds won’t be a problem, as the wind is only supposed to hit 6 miles per hour west-northwest, but temperatures could plunge to 25 degrees when this game hits around the fourth quarter.

Appalachian State reminds me of a game of Mario Kart: The Mountaineers constantly rubber-band to their competition. When they’re facing a more talented opponent, the Mountaineers tend to rise up and play one of their best games of the season; when they’re facing a team where they have the talent advantage, they tend to play down to the level of competition. I’m a little worried about how Georgia State can move the ball against App State’s strong run defense, but I’m also not very impressed with how the Mountaineers tend to take entire quarters or halves off.

I’m not going to pick Georgia State to get its first win over App State, but a 9.5-point cover looks very possible. I’ll take the Panthers and the points. Did you know you can move the line 20 points on college football spreads with the massive 20 point college football teasers at Wagerweb?