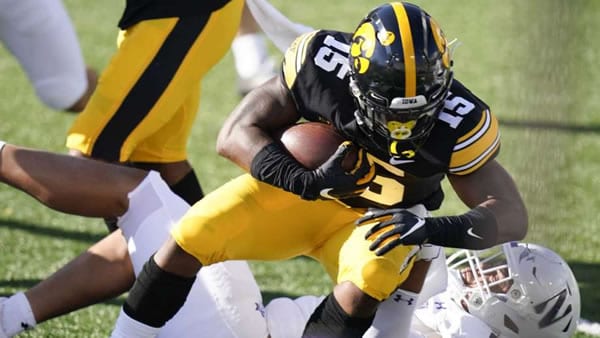 Iowa and Minnesota both just picked up their first victories of the season, so they’ll now shoot for .500 when they battle for Floyd of Rosedale Saturday night in Minneapolis. The Hawkeyes own bragging rights in the recent series between these border rivals, winning the last five meetings outright, going 3-1-1 against the spread along the way. Iowa is favored by a field goal over Minnesota, just like last year. Who do we like here for our free NCAA football pick?

College football betting odds opened Iowa as a three-point road favorite for this game, with an over/under of right around 55.5. Early betting action then bumped that total to 56.5.

The Hawkeyes started 0-2 this season but just picked up their first win, mauling Michigan State Saturday 49-7. Iowa drove the opening possession of the game 75 yards to a touchdown, led 14-0 after one quarter, then used a pair of defensive/special teams touchdowns to lead 35-0 at the half. The Hawkeyes then cruised-controlled it from there for the easy win and the cover as 5.5-point favorites.

Iowa has now out-gained all three of its opponents this season.

Two weeks ago, in blowing a 17-point lead and losing to Northwestern 21-20, the Hawkeyes threw the ball 51 times, with three interceptions, while only running it 23 times. But in the win over Michigan State, they ran the ball 41 times while throwing it 29.

Iowa opened its season with a 24-20 loss at Purdue. The Hawkeyes led that game 20-17 in the fourth quarter but committed a turnover while driving for a (possibly) clinching score, leading to a Boilermakers touchdown and defeat.

Minnesota also started 0-2 this season but also just won for the first time, beating Illinois Saturday 41-14. The Gophers scored the first 21 points of the game and led 28-7 at halftime. They then scored the first touchdown out of the locker room and cruised from there for the win and the money as seven-point favorites.

That was the first game this season the Gophers out-gained an opponent.

After giving up a ton of yards and points through its first two games of the season, the Minnesota defense posted much better numbers Saturday. However, we must point out that came against a shorthanded Illinois offense down to its fourth-string quarterback.

The Gophers opened their season with a 49-24 loss to Michigan, then blew a 17-point fourth-quarter lead and lost at Maryland 45-44 in overtime.

At 1-2 in conference play, both these teams trail first-place Northwestern by two games already in the Big Ten West race.

Iowa owns a five-game winning streak in this rivalry series, going 3-1-1 ATS. Last year the Hawkeyes popped out to a 20-3 lead in the second quarter, then hung on to win 23-19 and cover as three-point favorites.

Minnesota, which came into that game at 9-0, actually scored with three minutes to go to pull within four points but missed the extra point, which cost them a push of the spread.

The Gophers out-gained Iowa that day 431-290, but a dumb penalty on Gophers HC Fleck late in the third quarter negated what would have been a Minnesota 1st-and-goal situation, with a chance to tie the game.

Unders are 2-1 in Hawkeyes games this season, which are averaging 47 total points against an average over/under of 47.

Overs are 2-1 in Gophers games this season, which are averaging a healthy 72 points against an average O/U of 59.

Unders are 3-1 over the last four meetings between these teams, which have trended tough and low-scoring.

Iowa may own a five-game winning streak in this rivalry, but most recent meetings have played tough and low-scoring, and we expect more of the same Saturday. These teams are pretty  equal, and we can easily see this game coming down to a field goal, either way. We’ll take Minnesota and points here. Did you know that you can bet on college and pro football games at -105 instead of -110? Get your pencil out and figure out how much you’d save! THOUSANDS of dollars over the long haul! Dump your overpriced bookie and start betting smarter at BetAnySports! You’ll be so glad you did!