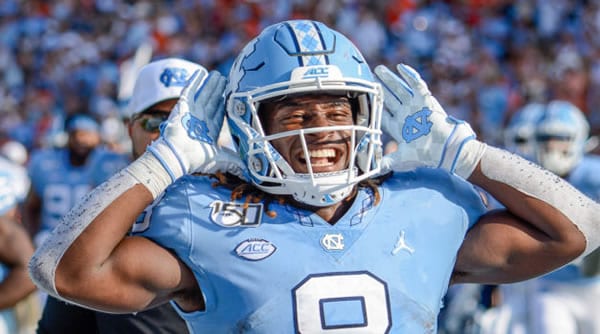 Two teams going in entirely different directions meet in what could become a laugher of a matchup. Florida State has been nothing short of a disaster in 2020, as the Seminoles haven’t beaten an FBS team (and trailed the Jacksonville State team they managed to beat at halftime) all season, while North Carolina looks like it might be the ACC’s best shot to end the Clemson dynasty.

The Tar Heels have been playing with fire this season, as they struggled past Boston College and nearly allowed Virginia Tech back into the game, but they’ve managed to stay undefeated. However, they now face their second road test of the season, and they do so against a completely unfamiliar opponent. The last time the Tar Heels faced off with the Seminoles was 2016, and they’ve only matched up twice in the past ten years.

How the Public is Betting the North Carolina/Florida State Game

The public is buying heavily into North Carolina, as the line has jumped 4.5 points in the Tar Heels’ favor, going from an opening of nine points to the current 13.5. The total has jumped three points, going from 61 to 64.

It takes either great offense or some awful defense for a team to rack up 600 or more yards in one game, and both were probably on display when North Carolina faced Virginia Tech. The Hokies had no answer for either running back Michael Carter or quarterback Sam Howell, who were both able to do anything they wanted in a game that combined for 101 points.

Based on Florida State’s defensive performance, the Tar Heels will probably opt for a run-heavy strategy with Carter. The Seminoles haven’t been able to stop anyone on the ground, but their pass defense has actually been pretty decent to this point. Even against Miami, which put up 52 points on the Seminoles, Florida State only surrendered 317 yards through the air, and the Hurricanes needed 48 attempts to get to that number. The Seminoles give up nearly 200 yards per game on the ground, and with Carter and Javonte Williams providing a mix of speed and power, the Heels should have no problem moving the ball throughout the contest. When Carolina does pass, look for Howell to look for Dyami Brown, who caught two touchdown passes in the win over Virginia Tech.

Jordan Travis was a bit of an improvement on James Blackman, but it’s uncertain if he’s going to be able to play on Saturday. If he is able to go, look for Florida State’s offense to feature a good amount of quarterback run, as Travis has established himself as Florida State’s leading rusher. He’s also been fairly accurate with his passes and has a genuine threat at receiver in Tamorrion Terry, who has already caught 21 balls for 275 yards, more than double the yardage of any other Seminole. However, Terry only has one receiving touchdown this season, which says that the deep pass play isn’t something that’s happening for Florida State.

If Travis’ hand keeps him out, the Seminoles will have to go with a traditional pocket-passer offense, as Blackman is not a mobile quarterback and isn’t going to be taking off. The running game would then fall to the stable of three backs: Lawrance Toafili, La’Damian Webb, and Jashaun Corbin. Toafili has the strongest yards per carry numbers at 7.1, but Webb has three of the Seminoles’ seven rushing touchdowns on the year to lead the team. Whoever takes the carries will have opportunities, as the Tar Heels had their problems with Virginia Tech’s running game last week. However, the Carolina defense completely smothered the Hokies’ passing, which means the Seminoles’ backs must step up for them to have a shot.

For all the trouble that Carolina has had with playing to expectations, they’ve actually done well against the spread, covering in six of their past seven games as a favorite. They’ve also been a solid bet in Tallahassee, as the road team has covered in each of the past six meetings, and the Heels themselves have covered on each of their past four trips to Tallahassee. However, that might not be a trend you want to read too much into, as the teams have only played twice since 2010.

When it comes to the totals, teams have been putting up points on Florida State pretty regularly, as the over has hit in six of the Seminoles’ past eight games. However, that hasn’t been the case when the Noles have played at home, as six of the past eight contests at Doak Campbell Stadium have seen the under cash.

It should be an excellent day for football in Florida’s panhandle, with temperatures of 73 degrees and sunny skies in Tallahassee.

I cannot see Florida State getting this thing turned around this quickly. The Seminoles appear to be a totally disjointed mess that will take Mike Norvell several seasons to clean up, as recruiting mistakes and three coaches in four seasons have caught up with a once-proud program. North Carolina, on the other hand, appears to be well set up for success against a weakened foe, and there’s little doubt that Mack Brown will make sure that his players know what FSU used to be, as he was previously the coach in Chapel Hill when the Seminoles were a power.

With a chance to win three straight over Florida State, Brown and the Heels aren’t going to get caught looking ahead. I think Carolina covers easily. Wanna bet this game free? Simply deposit $25 and you’ll receive a FREE $50 bet when you sign up at Intertops through this link and use bonus code ROOKIE200.